CCP, well played! I think you have a winner here. This is perfect for those who have busy cycles. They can let accounts lapse when busy and sub for the days they have time and want to play. Big step in the right direction!

I think there needs to be just a bit more explanation.

For most this is likely obvious but read the deal folks, your adding 3 days, not a weekend. I am pretty sure this is intended to be purchased when you want to use it then let it expire, buy again next time you want to be on. If you stack a few, you just get more consecutive days not more weekends. 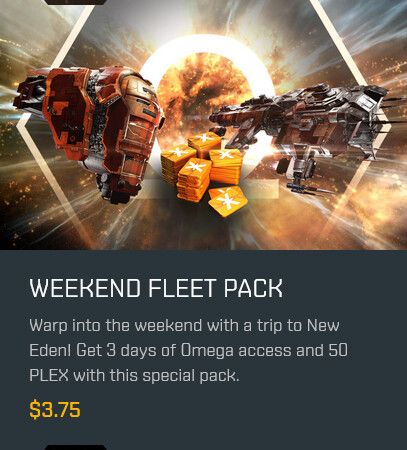 This is really great offer. I can get t2 manufacture going and additional clone jumps just for 3.75$ !

Looks like they are selling ship that cannot be obtained in game (excluding player trading). Luckily it is a shuttle and even if i wasn’t, it is not like you can win in this game so this is definitely not pay2win!

Be funny if it was soulbound and couldnt be sold tho

Not only is this a welcome feature, but it’s actually underpriced when compared to the baseline products. One month of Omega is $20, and 500 PLEX is $25, for $45 total. This pack is exactly 1/10 of each, which should be $4.50, but is $3.75 instead. Obviously stuff gets cheaper when you purchase in bulk, but this is still a great deal.

I hope it’s a permanent addition to the store.

Can these be bought more than once?

Cross-selling? Players will buy this for the short-term Omega, and will do so regardless if it’s a bit more expensive if something else is thrown in.

Seems to me they would be permanently available with no purchase limit. No time limit indicated on the Featured Products store page. This may be the perfect re-balance to the price hike. I wonder if someone whispered in marketing’s ear that “something is better than nothing”.

From the player point of view this is very nice, and as Destiny Corrupted pointed out, very well priced also.

I’ve complained on quite a few occasions that CCP’s ‘deals’ aren’t really deals at all (unless you happen to value skins and apparel quite highly). Lately they seem to be doing better in that department. Of course that may be simply because jacking up all the base prices allows them to give steeper discounts and make deals ‘look’ better.

From the CCP/marketing side, my primary concern would be that the small Omega packs, if repeatable, allow players to bypass either subs or plexing, drop to Alpha for most of the month and only kick in Omega for specific usage.

It could be a bit of a tug of war between that effect and Jonathan’s “something is better than nothing” effect (non-subbed players picking up a bit of Omega and Plex here and there).

Hopefully that war will trend in CCP’s favor.

I took advantage of this offer the moment I saw it. I am a casual player in general, so if I stick with a game for more than two weeks at a time, it is a rarity. This is why I always felt like half my sub was wasted money. And now with the increase to $20, I really was reluctant to resub again. But a micro-sub of three days for $3.75? That it much more palatable to me! It is a good move on the part of CCP.

I was curious if this was a one-time deal, sort of like those beginner packs that only allow one purchase per account. People seem to be suggesting that this deal can be taken advantage of as many times as a player chooses. If this is so, then I am really happy to see CCP offer this package!

Players will buy this for the short-term Omega, and will do so regardless if it’s a bit more expensive if something else is thrown in.

Id have considered it without it, but you are sure its not just quantitive easing? What can you do with 50 PLEX?

Anyway thats just picking. Its still 12 days where I used to get 30.

Unless Ive missed something thats even more expensive than the previous increase.

Buy a new Hulk when yours gets blown up by the griefer sociopaths?

Is that a kind of Orca?

Ofc thats just my own experience, and so isnt evidence. But when Scott says he’s done something, I beleive him because thats a FACT

You must not have to pay the international tax or fee that I have to.

Wait, let me guess, I should play another game, right?

Anyway, good OP. I agree with the latest offerings.

There are no taxes on US pricing as far as I know. They are already built into all prices.

Furthermore, even if there were taxes, the proportionality of the prices would remain the same.

You again, are incorrect.

Feel free to explain how and why.

He wont because he cant.

100 x “likes” that are usable on your own posts

“AutoTroll” ingame chat-o-bot, (Allows you to spam messages every 5 seconds to all local system chats in any constellation)