Weird characters/font for current solar system etc. when in station, is this normal?

I’ve been away from the game for a few years. When in station, in the upper left of my screen, there are gibberish characters (see image). When I mouseover them, I get english tooltips for “Current Solar System” , “Security Status”, “Show Constellation Info” etc. But the links themselves render on the screen as weird alien looking font. Is there a way I can change this to English? Thanks. 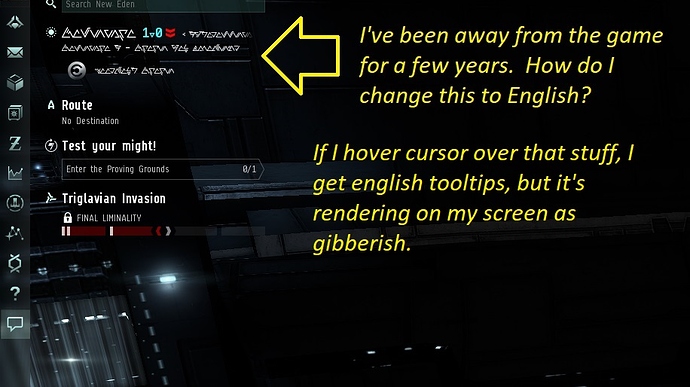 Yes, CCP thinks it is cute to do that.

So there is a fix for that, but it’s super weird. First, you have to make sure your jump clone is set to another system (like your school). Then is sit 10k off a gate in system until the text changes back to normal. It might take a while, so feel free to go afk.

Sigh, I guess I’d feel bad if you actually listened to that. What’s actually going on is that whenever trigs invade a system, it changes the text to the triglavian alphabet, or whatever.

By the way, that system is in final liminality, which means that concord no longer responds in that system.

CCP recently released a news item that said invasions are about to reach their zenith, and that players with stuff in invaded systems should evac immediately. Thus, I figured I’d make a post that helped get the word out and helped people safely move their stuff. Currently affected systems can be found here. However, do note that other systems may be pushed into final liminality before this is over. Keep your ear to the ground if you live in a system with an A0 (blue), B0 (blue), O1 (blue), o…

thx for replies. i started to sit 10k off the gate, but realized it was a trap, so i hit Alt-F4 to smartbomb everything 4tw. which worked like a dream. or maybe it’s the medication kicking in. i honestly can’t really tell anymore.

thx for the link, i was wondering what the ayys were doing here. they keep trying to sell me amway stuff it’s really annoying.

If you just want to check what system you’re in - right-click the top line of gibberish and hit ‘Save Location’, the name of the system will appear in English in the bookmark.