What are skill certificates?

When you hover over the skill groups in the skills menu, some of them have “Certificates claimed:” in the tooltip. What are those and how do I actually see them? Because some of them are “claimed” but I haven’t ever seen any notifications about that or have figured out where they’re even located in the UI.

I went ingame to look it up and provide you with an answer.

These ‘certificates claimed’ number make no sense to me. For example take my scanning skills: 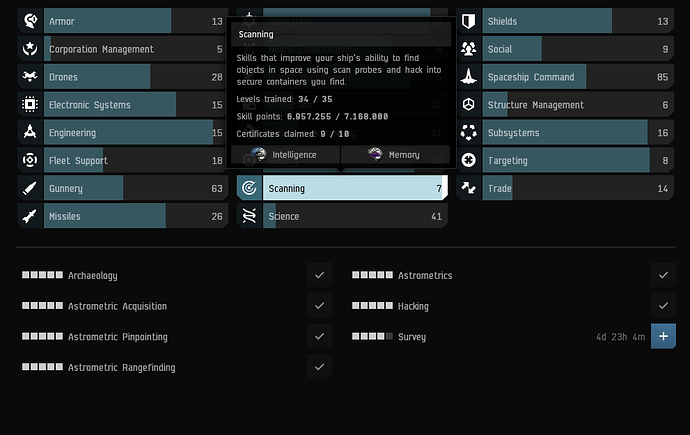 But don’t worry, if these certificates are just as useful as the certificates for ship mastery, you can safely ignore them, because those certificates have 0 use ingame and regularly are even misleading when they miss crucial skills or include irrelevant skills for a ship hull.

And if they’re more useful and are an indication of something I’m completely missing right now, you’re not missing much either because I’ve been playing for years without any idea of what these certificates mean and I don’t feel like I’m missing out.

(P.S.: CCP get rid of these silly things, they’re not providing any useful info and might confuse people.)

For some reason the T2 exploration frigates require Survey Scanning 5 for complete mastery, which is the last missing certificate.

They essentially group together skills related to a specific subject, also splitting them into levels. I think the only way to view these is by looking at ship mastery and see the ones that apply to that specific ship.

Now on to why ship skills are silly, misleading and should be removed or changed.

Let’s take two characters that both can fly a Basilisk almost perfectly. They both have level 5 skills in everything, except character A has ‘advanced targeting management 3’ and character B has ‘Logistics cruisers 1’.

However, in practice when a logistics pilot would use either character to bring repairs to a fleet:
Character A has all the skills to fly the Basilisk perfectly well and there is nothing that could be improved to his skills to fly better.
Character B, due to the bad logistics cruiser skill, runs out of capacitor in no time, which means the propmod stops working, the ship lags behind and is killed easily.

Now who has the best mastery of this ship?

It turns out Logistics cruiser 5 or at least 4 is crucial to fly the Basilisk well. And advanced target management can try to add more targets beyond 10, but as this is the maximum allowed targets for the Basilisk there is no point in getting extra levels as they do nothing for this ship.

Take the skill certificates with a big grain of salt.

Of course pilot skills matter a lot more than ship skills but if you are looking for a stat boost, it’s a good place to look at.

Certificates can be found under the ‘show info’ tab for each ship hull.

Under the “mastery” tab, under the “mastery level acquired” section (any one of the 5 levels), on the extreme left side you’ll see something like “armor tanking”, preceded by a roman numeral. Right click on that numeric icon. Click “Show Info”. A new interface will display with the certificate information.

When I started I used the mastery certificates to guide my skill decisions. I found it more useful than the “magic 14”, which seemed to gain in popularity sometime later as a guide for new players.

The certificates are a nice guidance.

To late for me but if it can help new players…