What happened to BS production!

I wasn’t trying to attack you specifically

I didn’t take it as such, but rather as an excuse for me to finally produce the wall of text that had been on my mind for quite some time already

Well, we definitely agree on the game needing to be fun, and I agree that many ship prices are too high, I guess where we differ is that I don’t feel prices are as big as a problem as you. Like, I am completely content flying cheap ships. I mean, I can certainly afford more expensive stuff, and still don’t because I don’t need to in order to get kills or have fun. In fact, this strategy has probably resulted in me having more fun, because it meant I spent less time grinding for expensive ships that I didn’t actually need.

So, I guess I do frequently look at ship costs more from a “spreadsheet-like” perspective. lol. Does the ship offer a good price to performance ratio? If yes, then I fly it. If no, then I don’t. Simple as that. I don’t get angry. I don’t grind for it. I just fly something else.

All of that being said, I do think that prices for certain stuff need to be adjusted for various reasons:

So, I guess we do agree in the broadstrokes -certain ship prices need to come down in order to help with the fun factor.

The problem with walls of text is that the message may get obscured. The heart of my long post was not the prices of ships, it was the fun factor in the game coming under pressure because of changes made which tried to address economic numbers. I equate the changes made to e.g., a t1 bs bpo with an overall wrong approach to try to “fix a perceived problem”. I criticize the game designer for neglecting the importance of the fun factor (including building a modest ship, like a t1 battleship), and focus entirely on “fixing the economic numbers”. The game designer went totally overboard on this.

I do not even relate the prices of ships with “fun” in the game, but I agree with you that when prices are prohibitive then obviously the fun of flying one goes out of the window. Rather, I state that all the activities involved in producing and even selling that ship, from gathering the basic materials onward, see a reduction in the fun factor of those game activities, because of all the different changes introduced. And that drives people away from our game. I’d rather see a temporary “wrong” solution like a titan/cap/super killer hull/bomb/cataclysmic storm/whatever doing its thing for the next 10+ years, than a series of allegedly “right” solutions that only look at economic indicators, ones that drive people away from the game.

We need player proliferation, and if that requires cap proliferation, well then so be it. Caps are there, live with it. Just make sure enough stuff gets destroyed …

And yes, CCP presented plenty of evidence for why scarcity needed to happen, and there were also large numbers of players complaining about things like structure spam and capital proliferation. So, this stuff didn’t exactly come out of nowhere.

I’m not sure what evidence you’re referring to? Was it the Ecosystem blog where they said they based a lot of it on the result of a customer survey? The one where they drew a line and said "player income is here and we want it down here at approx. 40% of where it is now? (Yes, that line says they want players to make 60% less than they do now.) 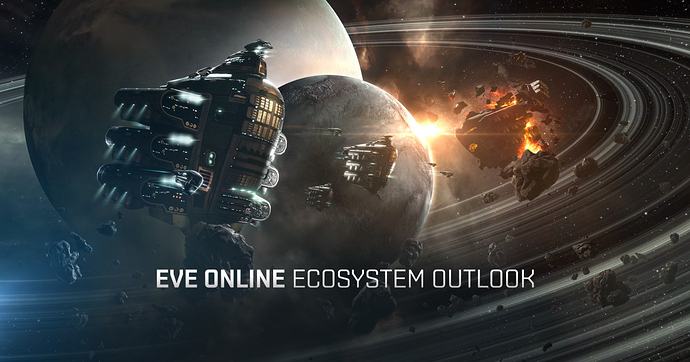 The state of EVE’s ecosystem and plans for the future.

Because honestly I never saw any data or ‘evidence’ beyond some funky rating system off a survey, and in fact argued at the time that the data showed that the economy for certain wasn’t broken.

Cap proliferation may well have been a problem, some people didn’t like structure spam but I’m not sure that qualifies as a problem. However, “let’s smash the entire economy with multiple hammers” probably wasn’t a good ‘fix’. Especially when their own later charts showed that Rorq mining, for instance, had largely ceased to be an issue over a year before.

Are losses now more meaningful? Have players re-engaged with the game because problems were fixed? Or is it the case as @Wadiest_Yong has put so well above - that they simply looked at some number they wanted adjusted and decided to slam their spreadsheets-in-space game with a bunch of spreadsheets-based changes and completely forgot that, oh yes, it’s not data they’re hammering, it’s the player base.

I give pretty much all of Wadiest’s post a “10/10 would read again” score but the key part is:

Human psychology here is very straightforward: if you have to pay for a game, and the game no longer serves its intended purpose of providing fun, when the game designer takes out too many toys from the sandbox, you stop paying and playing.

If one gets the numbers right on paper (for which there isn’t even any evidence, on the contrary), but there isn’t a player left, what good was the solution ?

The t1 battleship production question is merely a symptom of a much wider problem with the fun factor.

In my opinion, CCP has spent over a decade trying to hammer the numbers into the shape they want so they can use EVE money to “go do other things”. And have forgotten that without putting the fun in EVE for the players, there’ll be less and less EVE money to do anything with.

We need player proliferation, and if that requires cap proliferation, well then so be it. Caps are there, live with it. Just make sure enough stuff gets destroyed …

Well, I agree with this, my problem is with the “if”. See, I seem to recall NS hunters, roamers, unaffiliated alliance members, provi bloc members, and even some LS dudes complaining about it. Can’t say I recall any nullbloc members ever complaining about it though (and, I participated a fair amount in a nullbloc for the final year of the age of abundance/age of empire building).

Of course, Nullsec and Lowsec aren’t my area of expertise, nor am I heavily invested in either. So, I can’t say who’s analysis is right or wrong, and wouldn’t dare try to dictate what’s right for some one else’s play style. All I know is that there were people from a lot of different play styles who thought that cap proliferation was making the game less fun.

Yeah, they probably should have led with their strongest evidence first, instead of presenting it at a fanfest after Resource Scarcity has officially ended and players have had two years to fume. But they did finally lay out a strong case for it (instead of just expecting players to take them at their word), and there was also evidence that players could see themselves by looking at things like market prices, mining incomes for frigates/barges, and the proliferation of capitals and structures.

my problem is with the “if”

the “if” was merely my (personal, limited) conclusion that if/when the currently applied “remedies” prove(d) to be of the wrong kind because there is too much damage to the player base, then perhaps ccp should reconsider and produce a player driven counter to caps/supercaps, instead of creating fallout under the guise of “fixing the economy”.

That is not saying that issues like cap umbrellas and the like did not need addressing - and those were (tentatively ?) addressed in several ways in the last couple of years. Umbrellas of sorts will always exist in some form, it’s part of life outside of hisec and players communicating their system observations. And I’m also sure that it wouldn’t take much effort in finding people who would advocate for the removal of ansiblexes and filaments (or anything else for that matter). The question really is what, if anything, is important enough to create a game-wide unsettling change, endangering the primary experience of customers, namely “fun”.

Caps of course play a major role in the sovereignty related parts of the game, as do jump bridges, jump clones, jump drives and titan bridges. You probably know I have lived in Provi for 4-5 years. Their lack of a cap fleet was a deliberate choice. In my opinion, as much as I love the concept of NRDS space in EvE and the old provi bloc itself, they lived on borrowed time in a part of space they couldn’t defend against a determined, well-equipped opponent. Caps weren’t the problem there, the choice to not have them or use them was the problem.

Btw, of course caps are still being built… The arms race never stopped, nor will it, it’s just much less fun.

Okay, two things happened. Resource scarcity and Hilmar wanting to make ship losses more meaningful again. And yes, CCP presented plenty of evidence for why scarcity needed to happen, and there were also large numbers of players complaining about things like structure spam and capital proliferation. So, this stuff didn’t exactly come out of nowhere.

Wonder if Hilmar still thinks he’s a better economist than the actual real life economist the game had for years before being canned because he apparently wasn’t needed. Yeah, I bet he does.

Huh they used to have their own economist not sure what happend to him. Hilmar is a programmer not an economist.

But it doesn’t take a brainiac I can get it 3x better in 2 months solo I’m sure a dev actually working on it can do a better job I just think they don’t have people asigned to it.

They fired him then sued him for all of the pay he earned.

Do you have evidence of this? and also why?

That guy’s just a troll shitposter, you’ll only get BS and disinformation from him.

Dr. Eyjo accepted the position at CCP, did a good job, raised his profile a bit, published a paper or two.

Then a position opened at the University of Iceland and he moved to that. As mentioned in the links and articles. Just a better career option for him, and (belated) congrats on his move.

Yea and if I remember correctly he was absolutely great at it.

Players expression was in have the availability of being able to make a battleship with ease and be able to *bling (that is based on perspective) the BS out.

BS doctrine’s fuel alot of fights, and those fits were based on an economy of hoarders but not one that was based on *survival.

Losing a BS(then), did not mean anything to a line member (it arguably still doesn’t) but it does mean alot more than it meant before (I don’t mean way back in the day either) Losing a BS(Now) does.

I remember buying a fully fit armageddon back in the day for 70mil xD now I think its 500m or something.

There used to be a time when prices vs insurance payout was different. You could buy a bs, insure, undock self destruct, and make profit! Then if you were in an alliance with a srp program it would be even better. Every time you died you would come out way ahead.

Join EVE Echoes. It is good old EVE Online from 2008 and they keep things simple to make it mobile.

But its on the phone sounds terrible how do you double click in space.