When is sandbox's line crossed?

I mean, at some point, this is negative to your revenues and driving players away right? This is just crazy to me. Did not lose anything to this but I seriously would hate to see anyone impacted by this ‘gameplay’. 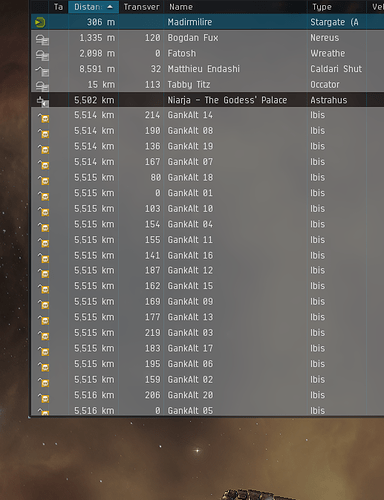 Piracy is legitimate gameplay in EVE and an essential part of the production/destruction cycle. It’s been part of the game since the beginning and will likely still be here at the end.

While you can’t eliminate risk, you can mitigate it - be an unattractive target - well tanked with small cargo value or fast and stealthy. I’ve been hauling cargo through Niarga and Uedama for 6 years without a problem - no reason why you can’t as well.

Of course, there is a chance that Niarga will become a Triglavian system which should be fun!

I mean, at some point, this is negative to your revenues and driving players away right?

Destruction drives demand in New Eden. Explosions are good for business and the game.

No doubt, there should be some balance and fun involved in your sandbox/virtual world game, but I don’t see how this screenshot is especially an issue. New Eden is dangerous, but also has intrinsic rules that mean you can do plenty to make yourself an unattractive target, especially in highsec. Even to an industrial-scale multiboxer.

Safebears, I mean industrialists have been saying variations on these words for over seventeen years and the game keeps on going strong. There is nothing you need to worry about here - although I will agree that massively multiboxing fleets for tasks like mining and ganking that benefit strongly from being done in parallel should probably be discourage by the future game design decisions of CCP, if it makes sense.

I mean, at some point, this is negative to your revenues and driving players away right? This is just crazy to me. Did not lose anything to this but I seriously would hate to see anyone impacted by this ‘gameplay’.

How is it negative for revenue? Proof of it?

How is it driving new players away, again provide proof?

And this has been in EVE for more then a decade, and it is still going strong, so apparently it doesn’t affect people’s gameplay enough to matter.

What’s your definition of a “sandbox” then?

there is a chance that Niarga will become

I’d say after 6 years it’s about time you know the name of the system is Niarja, not Niarga.

This is just crazy to me.

It isn’t clear to me what exactly is crazy to you. Others seem to have replied to the ganking part only, but it could be that you’re referring to a single player controlling that many accounts…

Both are clearly part of the sandbox, yes, but you do need to make your point clearer IMO and say why do you think one or the other might be crossing the line…

as said by Knowledgehammer, i don’t see what is the link for OP between the sandbox nature of eve and your screenshot

i see 20 ibis with similar names, ok, and what’s the problem?

wikipedia says about “sandbox games”: " A sandbox game is a video game with a gameplay element that gives the player a great degree of creativity to complete tasks towards a goal within the game, if such a goal exists. Some games exist as pure sandbox games with no objectives;…
Sandbox games are often associated with open world concepts which gives the player freedom of movement and progression in the game’s world."

so whats the problem here?

maybe one guy created 20 accounts to fly ibis. This is creativity. And if he wants to gank other players with 20 ibis with civilian lasers, i would say that it is fun and challenging, and goes perfectly with the sandbox nature of eve
or maybe 20 players decided to choose similar names because they want to behave like that

OP what is the point about the sandbox, i don’t understand

Did not lose anything to this but I seriously would hate to see anyone impacted by this ‘gameplay’.

Every act, impacts another players gameplay.

Sell minerals on the market? Youve just undercut someone else, and youve impacted his gameplay.

Put up a citadel for moon mining? Youve just taken a spot, and impacted someone elses gameplay.

This is the nature of a sandbox MMO. Your actions impact others. For better or for worse. There is nothing wrong with this.

gankers go after easy targets, don’t be an easy target is all I can really say.

congrats you just avoided most ganks.

No one has ever ganked me and at this point I could write off any loss as a cost of doing business.

This is fair. You’re right, I did not make clear the part that’s crazy.

I’m well aware that while HS ganking is ‘content’ it’s not my content but as you make a great point, it’s not MY Point.

The point in my screen shot is this is clearly an alpha account player with no revenues of his own coming into CCP. Maybe he’s generating rev for CCP by destroying the ISK of paying customers, I guess? But it definitely does not seem to be the spirit of the intent of the game’s sandbox mode - spawning n characters to get a 1B+ gank kill on a poor freighter pilot (evidenced by the multiple Concord ship kills for a single toon, re-shipping into their Alpha capable catalyst).

The fix? I don’t know…nerf Player on player damage of Alpha accounts but allow them to enjoy the PVE content/aspects?

Agreed. Not my point. Made my point clearer.

The last sentence is my point, not the HS ganking. I hate it, but it’s their right.

At least you got my point : ) We disagree, but you got the point of the post.

How do you know it is an alpha account?

You cannot run an alpha and omega at the same time. Each account running on the same computer needs to be omega.

So these will be paying players. Just like me… I have 5 accounts and I pay a yearly sub for each account in order to run them at the same time.

Kudos then to him that he owns and operates 20+ computers.

So, if they are all logged in together, they are all Omega accounts. And CCP is making a good revenue from it.

Kudos then to him that he owns and operates 20+ computers.

And not only that, but to operate more than one Alpha account at the same time regardless of being on different computers, that too would violate the EULA.

The point in my screen shot is this is clearly an alpha account player with no revenues of his own coming into CCP.

This would then be a clear violation of the EULA, as outlined here. Specifically:

Full stop. There is no provision for operating Alpha accounts simultaneously on different machines (virtual or physical).

Even if you have full on evidence that the player was operating 20 Alpha accounts simultaneously then your point is not valid. You’d report it and move on; let CCP handle it from there. If it’s 20 paid accounts then your point still isn’t valid.

Is this thread a joke?

I mean, an intentional one?