Why not turn this into a sandbox MMORPG?

Of course those who don’t know Eve may think that it is a sandbox. It’s certainly an MMO, despite all the damage that has been done to it. It’s not an RPG.

Why not a sandbox? In part because of the pay to win aspect. But even more because CCP drive the game the way they want. Things aren’t decided by players in reality because the rules are changed if people do things CCP don’t like. All CCPs efforts seem to be to drive people into the biggest possible alliances and force as much violence as possible. Not enough people being killed in their opinion so they add things like filaments and blackout. Citadels and stuff are designed to be vulnerable.

Alliances they don’t like have rules changes made against them specifically. Provibloc has often been on the receiving end of this but currently their big hate seems to be Goons.

A true sandbox has it’s rules. Sit back and see what happens. This would be much more fun for everyone. Fix what’s wrong with Eve CCP - there is plenty that needs doing. Don’t change for changes sake. The current “Do something stupid on a monthly basis” is so daft it really is funny.

I will give you a point or two for the new bookmark system and the idea of escaping from a battleship in a frigate. Everything else in the last year has varied between stupid and Holy Mother of God how did they think of anything that stupid?!?!

People almost invariably prefer small scale pvp. They don’t want to be forced into the largest powerblocs as you do. And everyone knows this. What are you trying to do? Just get bigger lagfest battles for news articles?

So where’s your real spaceship then?

Sit back and see what happens.

“There are no updates, CCP is just milking the game!”

It’s a whine about something, but it is so discombobulated I just can’t figure out what

You mean all this time I’ve been playing the role of an explorer and eco-warrior in this game, I’ve been doing it all wrong?!

CCP STOP TRYING TO IMPROVE THE GAME BALANCE FIXES ARE NOT SANDBOX.

Why not a sandbox? In part because of the pay to win aspect. But even more because CCP drive the game the way they want. Things aren’t decided by players in reality because the rules are changed if people do things CCP don’t like

CCP currently implements changes to game mechanics to keep the game’s internal economy healthy. In another thread I posted a link for a video of Fanfest 2012, where Eve’s economist, Dr. Eyjo, talked about the state of the economy and the prime concerns he had about certain trends. Those trends have increased a lot since then. Whether we agree with the measures that are being taken or not, it is undoubtedly intended to be for the better. That is not interfering with the sandbox concept.
And I disagree with p2w, it’s pay to play the full game.
CCP rarely intervenes in game play, emergent or meta, the real elements of the sandbox. And when they do - not often but this has happened on occasion - it’s because of very shady things that fall outside of the eula.

A true sandbox has it’s rules

If you had used the word “characteristics” instead of “rules” it would be more correct. Here’s the first definitition of sandbox game I came across sandbox game definition

There is an RP community within Eve, as you would expect in a sandbox game.

They don’t want to be forced into the largest powerblocs as you do.

They don’t have to, it’s their own choice. Large blocs have been in existence since the start. If players find benefit in joining a large bloc it is the natural and spontaneous progression in the sandbox game that they do so, whether you/we like it or not. True, their motivation to do so may be driven by economic factors, or protection but it is still their choice.

On a side note, I always “wondered” why CCP stands for Crowd Control Productions

Yup there it is

You can win EVE? That’s news to me…

Why not a sandbox?

it used to be a sandbox. But now its just a sandbox for CCP, and the players are the sand.

You can win EVE?

Yes, you can. You just need to uninstall the game.

In a perfect world, the only monetization method I would want to see in Eve would be that of self-expression (i.e. skins, character portraits, fireworks, etcetera). However, this isn’t a perfect world, and CCP is in the business of making money. Thus, I judge Eve’s P2W mechanics based upon whether or not they “oppress” those who spend very little money -and the answer to that is no.

Take Omega advantages for example. Technically, Eves’ F2P/subscription model is P2W because Omega’s get advantages that affect outcomes (i.e. double speed training and the ability to use advanced equipment). However, I never hear anyone complaining about it because (presumably because asking players to pay a sub is largely seen as supporting the game, rather than a way to milk money from the player base).

Anyway, I understand how P2W purists would hate things like plex, extractors, and selling SP directly to the players (in fact, I’m opposed to the SP in DLC’s myself). But, for the most part, I find Eve’s monetization methods to be reasonable.

All CCPs efforts seem to be to drive people into the biggest possible alliances and force as much violence as possible.

So, I agree that changes tend to drive players to big alliances, but I disagree about that being intentional on the part of CCP. Highly organized player organizations with lots of resources are simply better equipped to deal with adversity; and thus, many players tend to gravitate towards them. Let me put it this way, if the corona virus started turning people into zombies, would you head towards the nearest military base, or your local boy scout troop?

Anyway, I hear people commonly say that a change disproportionately affects smaller groups -and, they’re not wrong. Smaller groups tend to have more difficulty dealing with adversity. Thus, the problem is, how do you make Eve more dangerous without also hurting smaller groups and inadvertently driving players into the player empires? Personally, I don’t think it’s impossible. However, I do think that it is a major challenge.

People almost invariably prefer small scale pvp. They don’t want to be forced into the largest powerblocs as you do. And everyone knows this.

Strongly disagree. There are a lot of different people with different interests and playstyles. I understand that you don’t like it, but I have found myself enjoying flying with a nullbloc. I still think small gang is the most fun, but between SRP, flying relatively cheap ships, looting the field, and a knack for staying alive, I’m actually making money through nullbloc PvP. It’s not the most profitable way to spend my time, but I find it more fun than krabbing. Thus, it is my favorite income source.

I would love to personally wipe the windscreens of starships, being able to walk around a ship, take the gun from the fuel pump and charge the systems myself.
Gluck gluck gluck. Throwing a banana skin on to the floor of the neighbour launch pad, so that a pilot may walk over it and slip…That would be funny.

Maybe 50 pilots could banana crowd gank a pilot, with lots of banana skins on the floor.

In Eve someone surely would offer the anti banana accident insurance or a skill can be purchased, +5% sole shoe grip…helps dodging floor bananas at your launch pad. 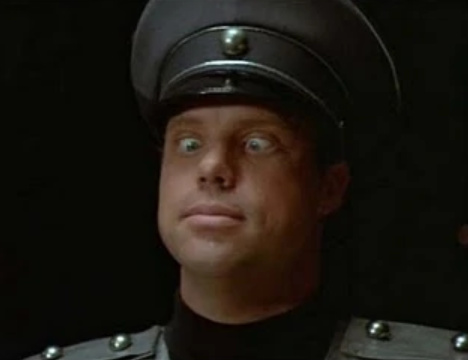 Instead of CCP working on all these cancelled games, why not spend resources on Eve…

There is no official definition of P2W, but it does fit many player definitions of what is pay to win. For example, the first 3 definitions of P2W from this reddit thread asking players to define P2W are:

So, you kind of proved my point

It is technically pay to win, but people don’t have a problem with it.

There is no such thing as pay to win in EVE. Tell me, under what conditions exactly do you “win” EVE? There’s no scoreboard, no leaderboard, no ending credits, no final boss, nothing…

Well, there is no official win state coded by the devs, but there is plenty of competition, and those competitions can result in winners and losers. I mean, just because players can define their own win-states (i.e. winning a 1-on-1 fight, winning the isk war, achieving the objective, etcetera), doesn’t mean that are no win states.