Why Mine, Why play?

What is the point of being a miner. Every day and sometimes more often, some idiot Omega hotshot who’s been in the game for +5 years comes and blows you up wasting an hour or 2 of your time while you return to base and get a whole new rig and then have to jump out, maybe 5 or 6 gates to start mining again and gt back to were you were 2 hours ago. Then it happens all over again.

There should be a penalty for players who attack alpha miners anywhere in the game. They should lose all their skills and money. and attacking omega miners should have a serious penalty too.

Alternatively give us a weapon to use against the webifier bullies. Something that stops them attacking us. A super bomb that kills their ship and all their skills. Or maybe a self destruct that does the same.

I don’t make much as a miner but I’m not bothering anyone skipping the automatic enemies and exploring.

If the only way to progress in the game is being a thieving bully, what is the point of eve. I might as well get on the playstation.

Eve should be more than this. I’m here on eve for something more.

How many newbies leave because of this bully domination. What are the stats. How much money is eve losing from all these lost paying customers who leave because of it or never go beyond alpha.

The controllers need to understand something here. Eve is entertainment. paying customers should be enjoying themselves not having their time wasted again and again.

Get in the new paying players and the graphics and game can go 2020s instead of it being stuck with 1990s graphics and 1960s sci-fi conventions. Gives us black holes, gamma ray bursts, super nova’s, suns with bubbling magnetic fields, neutron stars, rogue asteroids and planets, time dilation. There is so much missing. It’s like Einstein and the Hubble telescope never existed.

if wormholes exist they are just beyond the horizon of a black hole. Now there is a challenge for your graphics coding team.

Time to move the game on from shoot’em up. This will never be call of duty. Be something much more.

Then leave so the rest of us can get back to adapting to adversity and finding a way to overcome it.

Want to mine in complete safety? Then stay in the starter system as long as you feel like, this is Eve you should know what you signed up for by now.

Don’t want to be bullied by ‘idiot omega hotshots’? Stop mining in the same lowsec system in the same ship at almost the same time every day, you’re serving yourself on a silver platter by doing what you’re doing.

Join a player corp and learn to play the game instead of complaining.

only reason why i play is because of my corp i have friends now that i know i can have fun with. the toxic community is only toxic if you read what they write and a ship blowing up is never irreplaceable. so i play for loyalty and friendship not to be the best. so i would advice find a fun corp that u like the guys in and have fun and dont stress to much about anything else aslong as your happy its a good game.

Eve online features a type of PvP that is referred to as non-consensual PvP, always-on PvP, or unrestricted PvP. It can seem kind of brutal at first, especially when paired with the harsh death mechanic. However, always on PvP doesn’t mean the game is not built upon forcing people into unfair fights. I mean, if that were true, the population would quickly collapse.

Yet people still complain that it’s unfair -why? Well, I think there are multiple reasons. Some people are scrublords. They blameshift in order to protect their egos, which limits their ability to identify their mistakes and shortcomings. Some people are newbros who made the mistake of listening to a scrublord. Scrublords need validation, and desperately want to save face in front of other players. So, they’ll happily fill newbro heads with the idea that the game is unfair and that there is nothing they can do. And newbros who don’t know any better will believe them. For other people, however, I think it’s a problem of perspective. It’s not that they’re stupid or scrublords, they’ve just had a lot of experience with consensual only PvP games, which influences how they look at things. They’re used to games dropping them into relatively even matches on a level playing field, and then get frustrated when Eve doesn’t do the same thing. But Eve doesn’t work that way. Instead, it balances mechanics that force fights with those that allow people to avoid them, while also giving players a tons of options, both inside and outside of combat. So, instead of dropping players into fair fights, it puts the if, when, where, how, and who of competitions between players in the hands of players (well, in the hands of the better players). The end result is an astounding amount of player agency and choice… I love it.

We have a saying around here, “if you find yourself in a fair fight, you did something wrong.” Some people like to point to it and say that it’s proof that Eve isn’t fair. I think that’s the wrong takeaway. To me, it means that if I find myself in a fight that I don’t like, then that means I was outplayed. It means I ■■■■■■ up and let my enemy dictate the terms of engagement. And if I don’t want it to happen again, I better learn what I did wrong.

You’re not dying so much because the game is full of bullies or griefers, because the vets have an insurmountable advantage, or the game is unfair. You’re dying a lot because you aren’t learning from your mistakes.

Now, the question is, do you wish to learn? If the answer is yes, I will point you to resources and answer any questions you might have. And, if not… can I have your stuff?

Why Play? I mostly do solo exploration in null in an unarmed, cloaky ship. I pretty much play solely to interact with the hunters (not bullies) who are trying to kill me. The game is full of players who are using lots of hard-learned skills and elaborate strategies to hunt me down. I don’t find the scanning and hacking that exciting any more. I only play because of the other players that are putting in a lot of effort to provide content for me. I don’t know of any other game like this.

Why Mine? I have no idea.

What is the point of being a miner.

To be a victim for the “real” players, that’s it.

There should be a penalty for players who attack alpha miners anywhere in the game. They should lose all their skills and money

Damn that is some absolute PREMIUM salt. Show me where the baddie touched you

What is the point of being a miner?

What’s the point of complaining in a forum?

Then it happens all over again.

If you didn’t make the same mistake each day by getting caught the same way each time, but instead learned from your losses and tried to come up with a way to outsmart the enemy players, it will not be boring.

This game gives you a lot of tools to play with to outsmart other players, try to learn to use them.

Yes, if you turn off your brain and blame your losses on the enemy players, you won’t learn, will keep dying and have boring gameplay.

So try to survive instead!

At least he does his part and makes the gameplay of players who pew pew less boring.

EVE is a PVP game. You need to understand this. Mining, exploring etc are just a means to get cash so YOU TOO can move on the PVP.

I look for miners to kill all the time. It’s not easy. They have many counter measures to let’s them get away. If you keep dying, that’s because you haven’t learnt.

Is this just an elaborate bait thread? You flew a venture into the same lowsec system like 8 times and died while mining. What were you expecting after the first 6 times it happened?

Eve should be more than this. I’m here on eve for something more

Do something more. Join Brave! We’ll learn ya the gentle art of having fun while dying in a fire.

This one is one of my favourites where just about every undock was under attack before warping to the Invasion system ice belts. 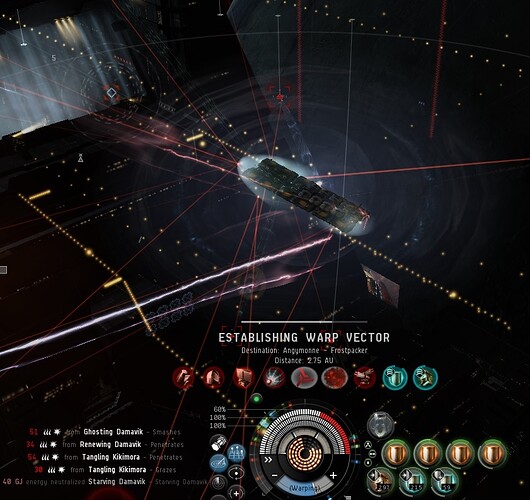 paying customers should be enjoying themselves

You pay for access to the software; the rest is up to you.

and camping/ganking highsec gates is overpowered, the game clearly favors it over other activity such as trading/hauling where you have ridiculous taxes and orders limitation. Also multiboxing is allowed but not scripting/botting, which also favors gankers. I hope one day the devs fix it.

I don’t see a scram/point but I see a web so the NPCs actually helped you get into warp faster.