More and more people complain there is no relative safety anywhere in NE, especialy in null.
When I started to play, I knew from the very beginning that EVE is dangerous, everything is scam (including EVE) and you are alone.
And that, I believe, is among other things the factor that atracted a lot of pilots.
However, not everyone is really as tough as their avatar photo presents and so, when things really become dangerous, it only reveals all the cowards behind the courtain.

When people complain that their precious little barge was destroyed in a suicide attack, well… the economy has to keep running and while there is police, that never, not even in real life, ensures 100% safety (lol).

When people complain that PLEX is too high, well… get a job.

When people complain that CCP is making changes, well… make your own game.

I always laugh about this whole “EvE is dangerous” thing. It isn’t, with the right tools and knowledge you can have everything in-game under control.

I guess I’m about 90% High Sec 9% Low Sec and just 1% Null sec here with my reply by replying with that sometimes I wonder about the systems I am jumping through if I should take the shortest or the safest.

Lately I had been more concerned about the Drifter Invasion systems and try to avoid those only when in a hauler.

There are some systems where I know I need to be bring on my a game and think about what could be after the next gate, like the systems that have more hot spots.

Danger is good for the game.

It is important to have less dangerous areas (LDAs) for new players near trade hubs so that they can learn general game mechanics. LDAs also help the flow of materials and goods for those playing styles that incorporate commerce as part of their game. I think EVE is losing players because of the invasions near LDAs disrupt all HiSec playing styles and create a lot of negative emotions. Time will tell if the invasion dynamic helps or hurts EVE. I am betting it is going to hurt player numbers in the future.

Pretty sure I see way more people complaining about “the complainers who want EVE to be safe/easy!” than I do actual complaints about EVE being too dangerous or easy.

Yeah. This post is literally a complaint about complaining.

Am I supposed to ignore you or follow your advice? This is a paradox

I always laugh about this whole “EvE is dangerous” thing. It isn’t, with the right tools and knowledge you can have everything in-game under control.

I’ve found that having friends in low places is an excellent place to gather knowledge and ways of using game mechanics to your advantage, regardless of what you actually do in Eve.

Complaints are what helps improve Eve. All sides of the argument should be heard. The idea is to not let too much emotion in and over time, if everyone brings some value to the argument Eve will only be improved. *Chaos and *Order, needs to be balanced, too much Order and it is not immersive Gameplay, too much Chaos and it is painful. That’s why everyone is entitled to an opinion, *negative or *positive. Because that is how you eventually find more balance…

Because right from the outset, the developers intended for the game to be harsh. This is clearly stated by devs over the years, and consistently reinforced by public figures such as Falcon.

They want it to be a place where getting chewed up and spit out is an eventuality, not a consequence.

When someone complains about suicide ganking they get told that’s the way the game is. Because CCP clearly states that CONCORD don’t prevent attacks, they implement retaliation. And they do that job flawlessly - to the point where if you ever did find a way around it, you’d be banned for exploiting.

I’ll never forget the moment I got hooked on Eve. The sheer rush and thrill, knowing the consequences of failure would be what they were. It’s exhilarating… so long as it doesn’t get stagnant. Which is where their changes, such as the recent Chaos bit, keep things fresh.

and what do you risk as a suicide ganker?
2 mil ship? where is risk in ganking in hisec? you have no penalty and can make absurdaly high isk damage to other person. It is unbalanced as hell - ok be ganker but pay the price. Concord should kill the ganker pod and respown time of the pod should be long not instant and why people with -10 can even respown in hisec? CCP only knows.

and what do you risk as a suicide ganker?

Your mistake is assuming Eve is fair. It’s not. Not intended to be, and never will be. Quite the opposite, they intend for “fair” to be what the players make of it.

There is nothing at all stopping the gankee from becoming a ganker, the playing field is level. What the players do on that field is, by developer intent, up to them.

if you are suicide ganker -
stop being a coward and take the risk of playing the game and you don’t hide forever in your cheap hull and pretend to be some epic swashbug, but you really scared and you would never get into the excavator where you shoot your catalist
or.
shut the ■■■■ up - some people have some balls to do other things then fire from chip catalists.

if you are suicide ganker -

I’m not, I only go into hs if I’m transiting to a fight or on my NPC corp alt for market activity. HS isn’t my thing, hasn’t been since the moment I discovered PVP in Eve.

That said, who are you to say that they have to play an open sandbox game your way? Who the ■■■■ do you think you are, that you can override the intent of the developers in their game?

Edit: Eve in a meme nutshell. 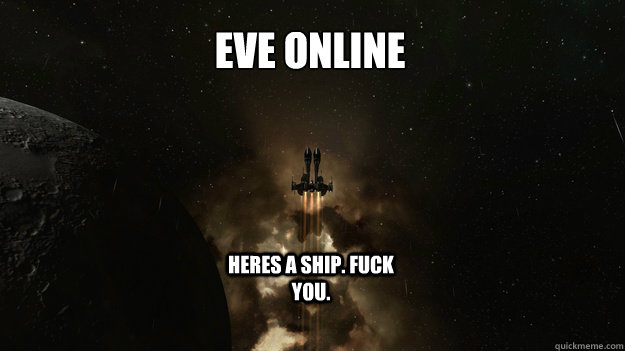 you are a f… meme - todays gankers.

How do killmails from 2010 relate to this discussion?

It is important to have less dangerous areas (LDAs) for new players near trade hubs so that they can learn general game mechanics.

I totally agree with this statement, with the caveat that less dangerous areas should also have LESS REWARD.