I know everybody says there’s only one way to win EVE, but tell me about one time you REALLY felt like you “won EVE.”

For me? Nalvula’s Totality during the Triglavian Invasion.

How about y’all? What’s one of those moments where it all came together for you?

If it had ever happened, what wpuld be the point in playing?

In these days of rampant monetization, you don’t win EVE.

It sounds like you could find a better use of your time.

And let them hoard every last bit of ice in my system unchecked? No thanks…

It sounds like you could find a better use of your time.

I’ve been playing for 16 years. I have everything I want and have nothing better to do. I hate AFK’ers, input broadcasters, and botters with a passion, and I will do everything in my power to thwart their activities every chance I get…

tell me about one time you REALLY felt like you “won EVE.”

I’ve been playing for 16 years. I have everything I want and have nothing better to do. I hate AFK’ers, input broadcasters, and botters with a passion, and I will do everything in my power to thwart their activities every chance I get…

Good for you. Still doesn’t make up everyone who had alts. You know some of us just alt tabbed a couple alts and did things manually. Said players could care less about what you personally thought about what I did with the accounts.

I’m aware of that. There are plenty of players that mine with two or three alts. I’m talking about Orca + 15 Skiff fleets, all moving in perfect unison. Those players get punted into the next dimension…

I know everybody says there’s only one way to win EVE, but tell me about one time you REALLY felt like you “won EVE.”

Oh man this is an awesome question.

LS pirates attack my HS sandcastle, right? Who cares the stations have been up for months and are paid literally x2 their value back. (via moon mining) Talk about economic garbage and zkill stuff laugh at me how we lost stuff and whatnot. “wE woN ThE ISk wAr” type of deal.

2 months later one of their most vocal players got into incursions. Ironic because I have been running incursions for years. I asked the person “Hay didn’t you try to kill my golem some months ago?” Guy was repping my Kronos in a WTM fleet.

He eventually spammed LSI to skill into a Vargur and other stuff. Trying to outclass the very activity I have been doing for years. Guess I am not good enough for people to hire gankers on me

Anyways I felt like I won EVE in this small scenario. People are such hypocrites with their PVP ideals it makes me laugh.

I got a much longer story about how I won EVE via incursions, but I think I’ll write about it when I have more time. 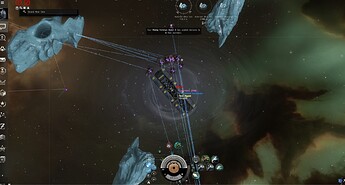 I just go for the Orca. Some players are smarter than others and fit a Higgs rig, armor plates, and an active industrial core, which greatly increases the mass of the Orca and makes it much harder to bump. Others fit for drone mining yield or don’t use an active core, and those I send flying. It depends on the player and how much they are willing to put up with, but I usually make them give up after about a half hour or so of sustained bumping. Once I bump the Orca outside of burst range, it’s all but useless. A Machariel or Vagabond at 13 km/s does the trick quite nicely…

I also make sure not to bump them past 150km to where they can’t warp back to an ice asteroid or anything else. At that point they have two choices, either slow boat it back to their Skiff fleet, or warp to a station and back to the ice anomaly, at which point I punt them out of it again…

If it had ever happened, what wpuld be the point in playing?

If the player is being a particular, recurring nuisance, I’ll just pay SAFETY or a merc group to pop their Skiffs one by one if need be…

Thank you! That was exactly what I’m looking for, and I’d love to hear that larger incursion story.

That was a older photo as I had not done Ice Mining for awhile. I do recall that Orca having 500mwd and drone rigs and if the webs don’t keep it on the belt I use to orbit the alts while webbing the orca making it harder to align the bump. (also I never ever afk a multibox fleet.)

I don’t get it either. These are players who, for whatever reason, have turned EVE into a second job…