Thank you both for your feedback

@Katana_Masen
In the case you mention both E175 and M001 types are shown in a C5 system (where they spawn), and their “other end” - K162 will be shown in their destination C4 system (where they leads to). So it’s the same for both types.
Difference between them is that E175 can span only in C5, and M001 can spawn in almost any class.
Maybe I didn’t understood you correctly?

@Sophia_Mileghere
It’s true that this tool is build up taking a new player perspective into consideration, and that’s the reason why I placed ship jump size as wormhole size instead of a mass number. I believe that makes more sense for the new players.
But, all the additional info about jump size mass and Nestor and fitted HIC (and more), is included in the tooltip if you hover it with your mouse. I’m assuming (?) you checked the tool on your phone, in that case tooltips and hovering traces are not working.
Tool is not mobile friendly (because no hover on touch screens) and I invite you to check it out on your desktop/laptop.

ya, sorry I was misunderstanding. Please ignore that

Very nice app, thanks for sharing.

Before the next incoming update dealing with wormhole type behavior, I would like to write about couple of less known observed mechanics around certain wormhole types.

Since February 2020 ‘from wormholes with love’ patch, wandering connections are increased and new wormholes introduced.

We are interested in those “new wandering connections between C4, C5 and C6 wormhole systems”.
So what are those new connections?
New wormhole connections are in fact 9 existing static types updated so they behave as wandering too.
Lets call them wandering statics for convenience, meaning they have both static and wandering attribute.
Those are statics from c4, c5 and c6 leading to c4, c5 and c6 systems, each.

Since that patch these previously static-only types can wander across their respective spawn class, and appear in a system regardless if the same static type exist/don’t exist there.

Further, static types spawning in Class 2 leading to w-space also wander, but not the k-space ones which remains static only.

Similar ‘wandering static’ behavior is present with frigate holes, difference being they can spawn in multiple different classes (as static in C13, and as wandering in C1-C6). Even C13 to C13 connections are observed, meaning A009 can wander in there too.

And, all static types spawning in Class 1 and Class 3 systems are static only.

Conclusion is, there are 3 different behavior mechanics around wormholes: static, wandering, and static & wandering.
In fact there is even another one - K162 statics (or ‘reversed statics’) present in Thera and Pochven, but that’s for another time as in this post we are focused on those 3 only.

I put up complete table of everything mentioned in this post (all connections types that spawn in C1-C6 wormholes) here: 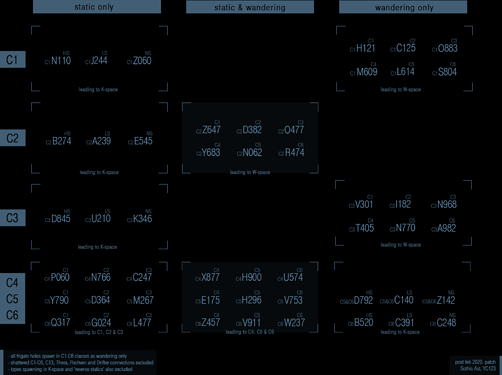 Really C4-6 static had not spawned as wanderings ?
I don’t remember how it used to be before the patch though, then 5/6 would have been super safe then.

Yeah, having those types outside of systems that have them as static wasn’t possible before.
I wouldn’t say 5/6 were super safe before, they just got slightly more dangerous

if that makes sense.

I also made daily and monthly kills and ISK destroyed chart for the year YC123 / 2021, which you can see here:

I will probably make this for several years before and place them all as interactive charts somewhere on a website.

Amazing work. Thank you and please keep it up.
Back a few years ago, ex-wormhole csm ExookiZ had been creating annual wormhole stats charts and surveys in mainly fanfest. It’s been absent for a while and was wondering if anyone would follow up ( I don’t since I’m lazy ).
Like this statistic is actually needed to have evidence based discussions.

Although It doesn’t need to be unnecessarily complicated, making it possible to sort out by class or other stats selectively would be nicer.

Like this statistic is actually needed to have evidence based discussions.

Couldn’t agree more. I’m glad people are interested, which is no surprise. Plan is to make a chart for all years since wormholes came out (March 2009) and make couple of filters you mentioned, like specific class activity.
I wonder where did ExookiZ pulled his info from, and are those charts still available anywhere?

Yep. ExookiZ himself had stated it’s data get directly provided by CCP, not zkill based.
In addition to the class, changes of major corporations, each involved parties sizes, ship types, caps etc, might bring some interesting conjectures up to us.
Afaik Surgical Strikes and Triage Nerfs are most impactful changes to wormholes in recent years, which has changed its landscapes forever.
I would cast doubt on whether CCP contributes this with their raw data, considering their recent anti-playerbase attitudes and the situation they keep denying communication with communities.
That being said, with zKill data the eviction-related killmails from structure drops might confuse the statistics. Hope there would be a good solution for that.

If you experience any problems with loading the site don’t hesitate to reach out.

Next update, I hope, will probably include Scanning Difficulty Level for every wormhole type signature.

I encountered a weird situation few days ago.
There was a direct wormhole connection between Class 5 W-space and Curse Region Nullsec K-space.
The odd is that the wormhole was medium size ( up to 62Kt per jump ) and its ID in the front side was L614.

According to whtype.info and Anoik.is , L614 can only appear in the Class 1 W-space, and It should be N432 or Z142 to connect between C5 W-spaces and Nullsec/Lowsec K-Spaces. 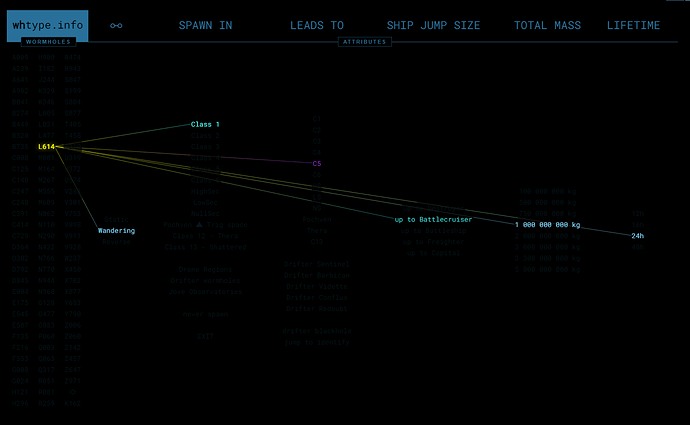 As far as I know, such like this exceptions can happen only in Shattered W-Spaces.

In my understandings, those terms of “spawns in” means they ONLY spawn in systems of specified class. Possibly I would be wrong now ?

Excellent find, and a weird one indeed.

Some have reported “deviations” in where wandering wormholes can spawn, or at least deviations from information available online.

You’re right, ‘spawn in’ column means - only spawns in systems of specified (highlighted/colored) class. In that case both anoik.is and my tool lacks this info. I would like to hold on it for awhile, to gather some more intel, but will definitely include that in.

Much appreciated for reporting!

No, it wasn’t. The C5 W-space connected with this L614 was normal C5 in Region 26 ( C6 static ), which is effectively inhabited with multiple citadels and Control towers.

Great info! Thank you for sharing.