Wow thank you very much

Couple of signature levels still left to document, they will be added on the go.

It seams that all K162's are Level 1, except in Drifter Wormholes where all K-space exits are Level 2, and in Thera where some K162's are also Level 2.
Excluding Thera and Drifter systems, one conclusion would be: if your wormhole sig in wormhole is bigger then Level 1 you can know it is an outgoing wormhole connection.

There is some indication that same wormhole type, one being static and other being wandering, have different scanning strength. More on that later.

If you find any missing info do report it here or hit me up in game. I would appreciate it.

This is an amazing WH Tool! Thanks Soth!

It appears that wandering medium sized wormholes, thought to appear only in C1 systems, spawn in NullSec too.
If you find any of the following wormhole types in NullSec, feel free to send your report (screenshots included). 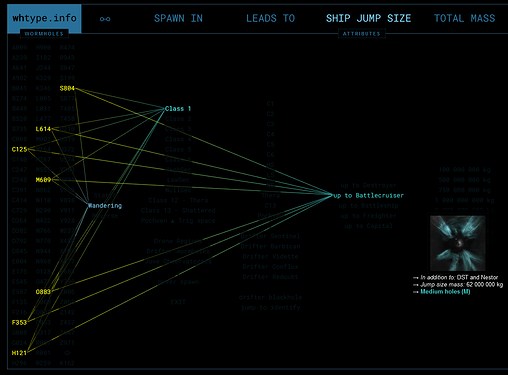 Information on the website will be updated after multiple confirmations/reports of the same wormhole type.

Heads up everyone, according to hoboleaks.space there are some incoming changes regarding few wormholes.

Frig holes lifetime is changing from 16h to 4.5h:

Also there is a new wormhole connection J377.
According to hoboleaks it’s specs are: leads to low-sec, battlecruiser jump size, 24h lifetime.

These changes could not be final but, once stuff hits tranquillity website info will update accordingly.

What does the “WormholeTargetDistribution” define ?

There are no other wormholes sharing this attribute with J377 and existing attribute to wormholes don’t seem to have common point.
http://games.chruker.dk/eve_online/inventory_attributes.php?attribute_id=1457

So if you’re sitting in front of a H121-ID that you can see the wormhole in your overview is named with, you know that this wormhole leads from a C1 into another C1-wh.

Maybe this value of incoming J377 type is temporary until it comes in game. If its true that it will lead to LowSec, value will change to 303.

So I have found the new J377 wormhole.
It is connected to the Turnur system (the one we had stellar incident yesterday). 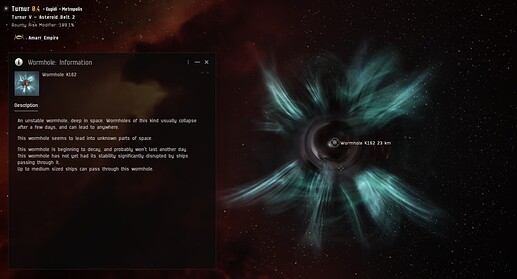 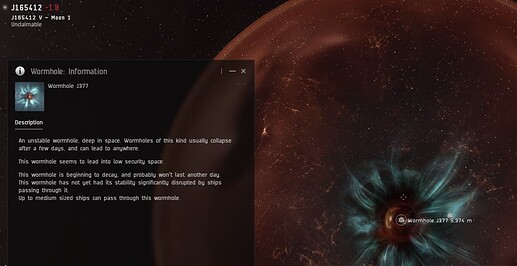 I will update the site with this clearly insufficient info for now.
It could be wandering and reverse (as in Thera connections).

Any new findings please report it here on mail me in game. I would appreciate it.

EDIT: Another one, also connected to Turnur, but spawned in C1 J155429 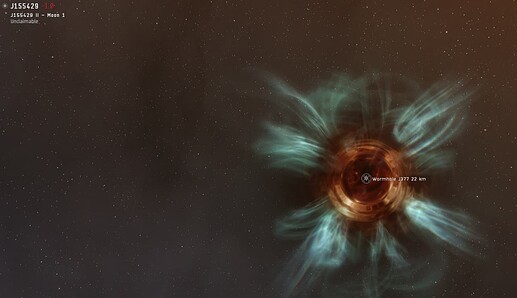 So does the Turnur have only reverse wandering?
Aren’t they static? Any updates through last weekend?

So far J377 is observed to spawn only in low tier wormholes (C1-C4), and leads only to Turnur system.
It is reverse static, as in Thera and Pochven connections, although I mark all those holes as wandering too (because their true type wanders nevertheless, and K162 is the static side).

Additional info from CCP Kestrel/Suitonia on reddit regarding spawn rate:

I do wonder how ‘end of life’ state applies to them now.

Interesting. I have encountered wormholes led to Turnur, this seems to be providing some interactions for forgotten low class wormholes.

I need to make some research about frigate holes.
How does the frigate holes age ? Do they look eol right after they spawn ? Is the K162 spawn rule changed on new frigate holes ? etc, etc

Interesting. I have encountered wormholes led to Turnur, this seems to be providing some interactions for forgotten low class wormholes.

Yeah, Turnur has become mini Thera as they call it. Too bad we won’t be able to see same effect in Egmar and Vard.

I need to make some research about frigate holes.
How does the frigate holes age ? Do they look eol right after they spawn ? Is the K162 spawn rule changed on new frigate holes ? etc, etc

Frigate holes are in observation phase at the moment. They don’t look eol when they spawn

though they are found eol most of the time now. I will write something about this as soon as more info is gathered.

Some have requested to put up visual showcase of eol state somewhere on a site, for newbros. Will do that.