Today we have a sizeable cost for Omaga plexing, from 500 PLEX right down to 300 PLEX. That is a full 40% sale. It is, as far as I can remember, the biggest Omega sale to date. Are you going to seize this opportunity to activate more game time? How will the sudden price hike of in-game PLEX affect you? What do you think triggered this sudden sale and what are your opinions on it? 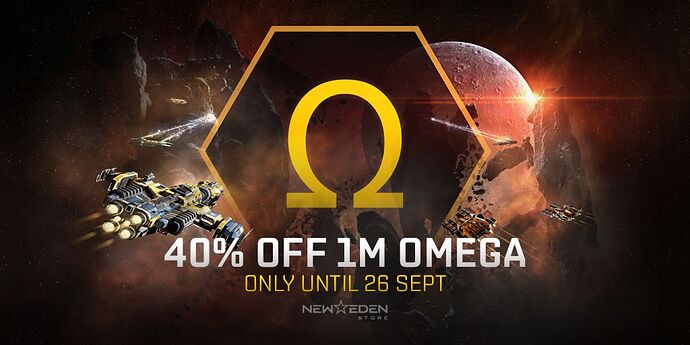 For people doubting this sale is real, here is proof that it is working: 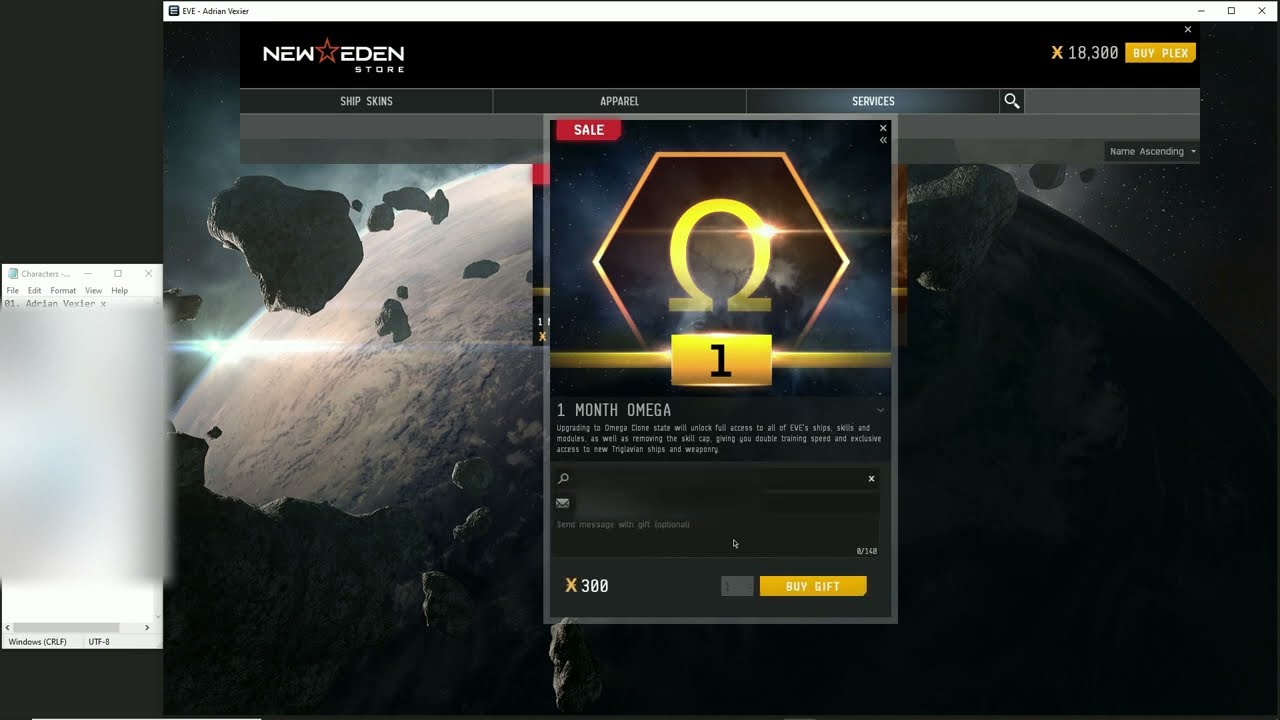 They’re probably trying to suck a bunch of Plex out of the system so they can offer a sale on Plex in a month or two.

Either way, it’s something to take advantage of if you’re able.

Link to it or it didn’t happen.

Look in the NES store.

I cant afford the PLEX to do this as it has increased too.

It’s still cheaper, even with the PLEX price spike….but I do sympathise; it does seem to favour space-rich players. I think maybe it’s an attempt towhittle down some of the PLEX hoards in the game, as CCP can’t use bought PLEX on their balance sheet until it’s spent.

as CCP can’t use bought PLEX on their balance sheet until it’s spent.

Good point. As Destiny Corrupted mentioned in your other thread, September is an important time to bump up the numbers for quarterly reports. So moving a bunch of Plex out of player accounts and allowing CCP to declare them on the balance sheet could be a quick numbers bump.

Whatever the reason it’s good for anyone sitting on Plex who wants some Omega time before year-end. Get your month now and win your spot in the “Year in Review 2022” video list!

What a Kick in the Teeth for anyone paying to play…

I thought CCP (and the CSM) had a little more respect for it’s older players.

It would seem, that sadly, this is not the case…

I am, however, at a loss to see how this sale benefits anyone other than the richer players - Even more saddened that there is no-visible CSM response…

I rarely ever use PLEX to buy Omega time, basically only done for emergency situation like when my Omega status is going to run out before I’m ready to buy yearly subscription.

Mostly use PLEX to boost my ISK wallet whenever needed.

How will the sudden price hike of in-game PLEX affect you?

I bought 2 months had 300 plex before the sale and spent 1.6bil for 300 more. I worry I will have to pay 2.8-3bil for 500 plex if nothing happens. This has been the biggest sale I can remember seeing in my years plexing.

Can anyone send me 100m plz?
I just busted Evan out of jail and now I need to get Scooter McCabe out…
Thnx in advance.
o7

What a Kick in the Teeth for anyone paying to play…

How is it? If you are on Omega atm you should be swimming in isk, so just buy some PLEX and get a month off the $20.

Whatever the reason it’s good for anyone sitting on Plex who wants some Omega time before year-end.

Exactly this. Im only bitter because I already cashed in my stockpile before this happened!

Why would you think it was supposed to?

Link to it or it didn’t happen.

How about a video of it happening? I just PLEX’ed 70 months. 19 of separate characters and 51 on one single character. I hope the game will still be on in 2027 when my Omega expires…

Thanks for posting this AFTER the “sale” is over.

Thanks for posting this AFTER the “sale” is over.

I made this sub-reply now and the sale expired not even half an hour ago. However, the main post was made two days ago and you even answered to it two days ago. You had plenty of time to verify for yourself. It’s not my fault you do not have the mental fortitude and the will to verify for yourself.
Sad for you that you practically missed the biggest Omega sale in EVE’s history, while it sat right under your rummy nose. Tuff luck and pay more attention next time, Chuck!

you do not have the mental fortitude

Wow. You assume much.

Why are you so sensitive?

Wow. You assume much.

It’s not an assumption, it’s an obvious observation.

Why are you so sensitive?

Another misinterpretation on your part. I’m not sensitive about the matter, I am merely stating the obvious. It seems you are the sensitive one. What? Did you miss out on PLEX’in one or two months?
Again, as I said before, you were informed of the sale and even acknowledged the main post, but you still didn’t take the time to verify for yourself. Now that you missed out, it’s entirely your fault.
Tuff luck, Chuck!

The daily player peak is edging perilously close to falling below the symbolic 20K mark.
If the daily peak happens to fall below that value, it will be the first time that has happened since 2006.

This action should keep that particular wolf from the door for a few more months.
After that, who knows what will happen.

Also, I would have taken up this offer if they had bothered to advertise it. But never mind, I shall remain as Alpha in protest at the Omega price hike for the time being.

The promotion, is it still active? I am always offered 500 PLEX/M

nope - you had to log on to the game client and look on the NES store as far as I can tell. (someone please correct me)