@ISD_Dorrim_Barstorlode
Why doesn’t this forum have a Block Feature?

Every forum I ever used has a Block feature.
Why not this one?

What would it take to have a Block Feature, is it too hard or too expensive or did someone think the forum didn’t need one? Why not?
The most toxic community in gaming ever but the forum has no Block feature… makes sense.

There is a “Mute” system in Options but that doesn’t do anything besides the system won’t alert you if someone you have muted replies but his/her post remains in the thread to be seen, the user isn’t blocked, only silenced.

So, again, why no Block feature??

Take a look on the Settings, when you inspect the Charakters Forum Infos. Ignoring should solve your problem. 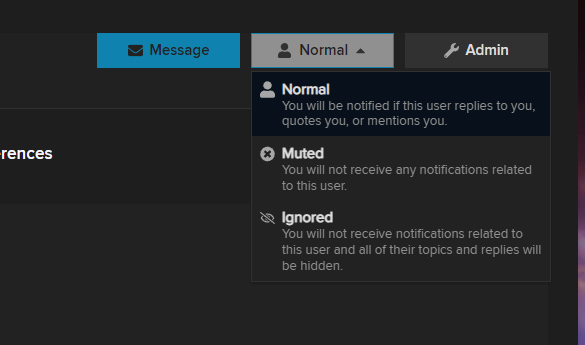 Never used it myself yet but heard several people mention there is a feature to hide users or even them being quoted by others so the forum should have such a feature. As far as I understand the posts will be there but their content will be hidden so you won’t see their posts unless you click to unhide them.

@ISD_Traindriver Thank you!
I was logically looking in Options - my bad.
Should make for a much more enjoyable reading experience now, I appreciate it.

There are some who hidden their profiles, so you wiuld have to manually add them to the ignore list on your profile settings

I don’t yet have that option. All I can do for now is Mute a member. I should be able to block soon and thank you for the tip.

Blocking/ignoring anyone means you have already lost the argument.

Unless it’s harassment. Then report it to the moderators.

I have never blocked anyone. Meh…

Blocking/ignoring anyone means you have already lost the argument.

Doesn’t bother me. Does it bother you?

Bother? Not at all

But it does show the content of your character

You can block/ignore me all you want. No loss to either.

No need to take it personal.

Already? My character? You judge fast. I shall do the same for you.

Just stated a fact. Nothing personal about it.

I mean you’re scared of internet words my guy.

That says a lot

Looks like Ignore does not work anyway. I just noticed a new Lottery topic by BIG Games in the New section, even though I have him set to ignore. When I open his topic, it says “(Ignored)” but the topic still shows up in the New section. What’s the point of Ignore then?