A message to all Triglavian Invasion players

I was in the sistem yesterday, a cople ppl send me mail that if i side with trigs i get on their killboard.
Man what a way to scare a poor noob that is salvaging in sistem.

no change is good right ?

all that will be left are a handfull of botters with 100’s of accounts.

lets mix it up lets make this shithole a little more interesting.

no change is good right ?

No change is better than change for worse.

I want to say thanks to every single Trig FC I’ve flown so far for never, every saying “you can’t go, we need you”. Everytime I was tired, and said need to go, I got nice farewells and good nights. Sometimes it meant the fleet had to stand down, but such is life.
Thank you all folks, for being decent humans first, and blood-thirsty killing machines second!

i advocate this everyday to my fleetmembers when im running trig fleets. I however am in control of my body and my time and ill kill myself if i want to reeeee

I blame CCP for creating content where i have to exist for long periods of time in order to ensure victories because no one else wants to or can lead fleets.

It is kinda funny how the null guys can set their timers and do their ‘leet PVP at their convenient times. But when highsec gets hit, it is a no-warning 24 hour mid-week death-grind.

I thought you were going to come out with an agreed upon time to fight over the system.

It is kinda funny how the null guys can set their timers and do their ‘leet PVP at their convenient times. But when highsec gets hit, it is a no-warning 24 hour mid-week death-grind.

27 to 70 hour death grind depending on the system and the balance of power.

I thought you were going to come out with an agreed upon time to fight over the system.

When I approached Leon originally, it was about two possibilities to reduce the hurt people are inflicting upon themselves. The idea I spitballed was reducing the number of concurrently invaded systems. After some discussion it became clear that would probably not do anything to stop people from going bananas. The second idea I spitballed was introducing vulnerability timers similar to those of TCUs in NS space. After some further discussion, it became clear that it was unlikely that CCP would do that. So we settled for the option that was actually within our reach, having the FCs come out and publicly say that people need to take care of themselves.

Didn’t really change much. When Niarja went First Liminality, I withdrew the HS fleet and sent it elsewhere, began forming an armour fleet, made half a dozen pings in an instawarping Ares, went back to HS, broke through the Dock Workers gate camp at 0930 servertime and started to run emerging conduits by burst DPSing them before the 75 Ferox Goonball could drop on us. Then server restart happened and my fleet went from 20-30 on grid to 6 because all of them were USTZ who had been working themselves too hard.

That manpower drop, in combination with the passive stationing of Sisters Combat Probes in every Emerging Conduit was reason to withdraw completely. Thankfully only a single Exequror was KIA because of landing at an EC at the same time as some fast tackle did, but it goes to show that the fleet was essentially entirely comprised of tired people, and the cloaky eyes facedesking because it was 4 AM for his timezone was a particularly hard hit at that moment in time. I appreciate the dedication but they should’ve all been in bed long before I started forming.

23.5/7 grinds without end, without pay, scripted by ccp that’s what you sign up for.
Think about that when you sub next time…

Actually, I installed this game for Faction wars, went there immediately after the tutorial and subscribed specifically for it because:

Granted I had the benefit of starting FW right before the Floseswin War heated up, so my memories are mostly those of fleet pvp, nanogang pvp and solo pvp. It was the best formative experience a new player could ask for, and I have a deep sense of pity for those who started out in Highsec and never left it.

Invasions are the first time I’ve seen where the expectations placed upon individual players in terms of gameplay time are in the regions of the absurd, but without any real reward. However it is also a necessity, as these invasions will have permanent repercussions for the systems they spawn in and the routes they are on.

Actually, you may all be nastily surprised when CCP will make something, that you never expected will happen.

What they may be forced to do.

You will all be really displeased how much time did you lose for that meaningless in the end change.

All the tears I’ve seen so far from people is more than enough. At this point I will be happy with whatever changes will come.

All the depressing posts after niarja were as sweet as honey dribbling down a tower of tear soaked pancakes.

I think you will be most disappointed.

i think edencom need a break
Especialy after Niarja event 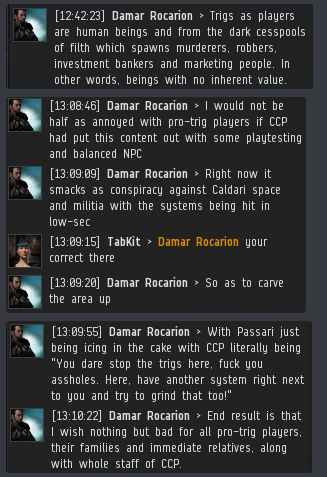 Using mental health as a troll stick is low. I see you . In another post you commented “https://prnt.sc/u290z8 The mental state of Kasiha Valkanir and the rest of edencom after the fall of niarja”.

This is a serious thread (by a frankly excellent FC who I’m happy to have flown under) about the enormous time demands this content has placed on people trying to achieve an objective.

It’s not a place for you to low-key smack talk about mental states. As I said, I see you.

I have already spoken to him about it, and it will not repeat itself, but the Caldari State has been screwed harder by this event than any other faction, so I can understand perfectly why a diehard Caldari loyalist would snap after watching this stuff happen for weeks on end.

I feel no need to apologise for any of that after weeks of putrid local smack by Pro-Triglavian players, including your bitter shouts about me being an a…hole after the time I shot your little ship in Kino.

Wake up, i already replace that ship with the money i make with the invasion.

Also, edencom deserve smack talk since they brag about arshat been “save”
And again and again, until you and all edencom player start to enjoy this content instead of stagnation

You say we should enjoy this content, which consists of soul crushing, non-playtested monotonous npc grinding for little reward and then you say I have mental health issues?

Try harder. Gallente militia went much much lower decade ago and you are hardly worth the attention in this regard but I humored a troll for a while.

I wont bother continuing it after this.