So… people love skins, right? Being able to recolour your ship is cool. But it’s only a palette swap, what if it could be more than that? I’ve seen a couple of skins which add some flashy effects around the ship. Only fairly small details, but they’re there. There’s also some ships which have been given major overhauls in their visual design. The new version is much different from how the ship used to look. But what if someone liked the old version better?

Why not add skins that let you bring back an old ship model (updated for the newer graphical quality, of course)? Why not add skins which change a little more about the ship’s aesthetic than what we have now? Don’t totally redesign the ship, it’s a visual change, not a totally new ship. There are a few ships already which have model changes based on choices made by the owner about how they’re equipped. The weapons you mount on a ship are modeled on it in a visual way. This would just be another layer of visual customisation.

Or maybe it could be a manufacturing-based thing? When you put a ship blueprint into a manufacturing slot, it could open up a second “cosmetic blueprint” slot which could be used to alter the ship’s appearance. The variant model would have a (small) resource cost in addition to the base ship cost, and when using copies, the smaller number of runs is always the highest amount the player can queue up. If you have a 5-run BPC for a ship, but only 3 runs on your cosmetic BPC, you can only make the 3 modified versions, not a full set of 5 with 3 getting the cosmetic applied.

These could start out as unique PLEX store BPCs, with no originals available at first, just to test the waters. See how they’re received by players. If nobody likes them, or they cause riots for some reason, cool, take them off the store and remember this idea doesn’t work. But if they’re popular, consider making BPO versions so players can make a (bigger) one-off purchase to set up a supply chain for the altered ship design going into the market in a bigger way. If there’s an additional resource cost to the updated version of the ship, then it’ll cost more to produce, which means it’ll have to sell for a higher price than the regular version. But maybe not by much, so there could be pricing competition between the different versions of a ship.

It’s a real shame that we can’t have nice things in EVE because of this.

One could argue that the skins should go through the same process that alliance logos pass through before they go into the game, but that would probably require a dedicated CCP staff position and someone who is consistent in the decisions (we all know the hideous alliance logos that made it through CCP’s decision process).

Tools were made for this, there was even a website for a while where you could test it out. Players were originally meant to be the ones to make skins for one another. Unfortunately when they went to “test our interest” we proved so interested they realized they could make a lot more money “paying artists” to make the skins for us.

You weren’t able to make things in bright colors, or combine shapes to phallic results.

Apparently, CCP has changed their mind on the bright colors, and someone would find a way to turn ships into phallic shapes. There are something like 1,000 skins in the game as it is. There’s more than enough, and most of them are hideous…

You couldn’t find a way to make a phallic Shao as you didn’t really have control over over shapes. And if course they “changed their mind” about bright colors. If they thought they could get away with it you better belive they’d sell hello kitty.

Ccp has never let a promise get in the way of making money.

People seem to forget this is the same company that sold an in game t shirt for more than the real one it was based off in their store.

At what point in my post did I say players can DESIGN these skins? I said the skins which are provided and designed by the devs, would be available for players to apply to their ships, or possibly for player manufacturers to apply to the ships they build. And the player manufacturer side was a secondary suggestion to the one of adding skins which have only slightly more than the palette swap worth of change in appearance we get now.

Also, how are people discussing the idea that players are the only ones capable of making phallic looking ships? This is an in-game model and it’s not hard to run into one: 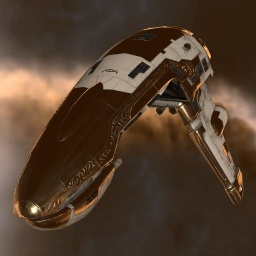 That was the idea, yes.