Tonight Live on Twitch EVE did the draw for the remaining spots in the tournement- each allaince had ONE ticket in a hat and an equal chance of getting a place.

at 14mins 45 seconds they pull MG420 out the hat at 16 .40 they pull their second ticket and admit they have two tickets

Hello, I was the one who did the draw. This is my ping in the EVE_NT Discord after it happened.

Tonight if you watched the stream you’ll have seen that one team was drawn twice in the first 8. This was a ■■■■ up on my part and my part alone. I want to walk you through how it happened and what we intend to do about it.

First: How did it happen.

Mrs Hawk very kindly offered to make little cards for me to draw out of a hat for the show. She isn’t an eve player and needed a list of Alliances. I made the list from the entries and, using Whatsapp web, I sent it to her along with an image for reference for colours (Times in UK TIME): 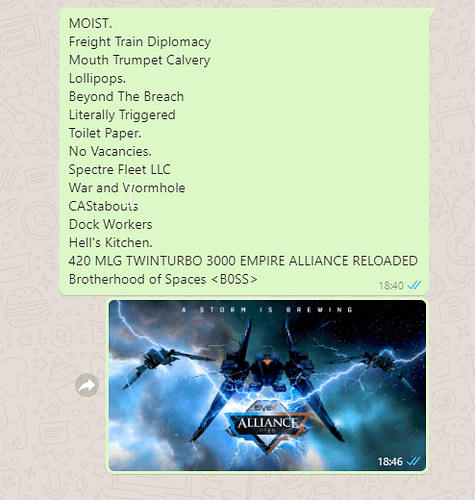 This was received by her and she got to work using her phone to view the message. Due to the long name of 420 MLG TWINTURBO 3000 EMPIRE ALLIANCE RELOADED it spilled onto two lines on her phone as shown here: 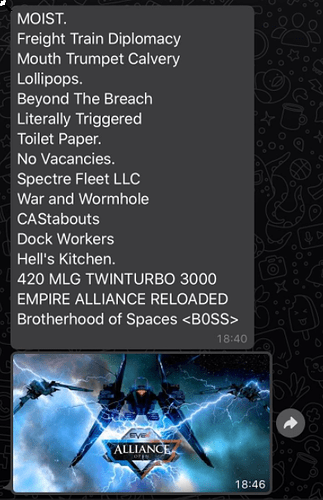 As you can see, 420 MLG TWINTURBO 3000 and EMPIRE ALLIANCE RELOADED appear as two items on the list.

She set about making the cards. As I was running a little low on time and trying to fix other technical issues with the streaming setup I started cutting and folding them before they were all completed. I should have checked them again but I did not. This is how MLG ended up with two entries in the hat.

Second: What are we going to do about it.

Obviously this effects the odds as 420 MLG now have double the chance of being drawn over any other team. This isn’t fair. However, thanks to an amazing stroke of luck, they were drawn first.
What does this mean? If we discard the first ticket now we have a ‘new’ hat with 15 teams each with ONE card only. As such, first ticket discarded, each team now has a 1/15 chance of being drawn AS IT WAS ORIGINALLY INTENDED.

As such, we are REMOVING the VERY FIRST CARD DRAWN ONLY. Therefore, the first team drawn will now be Brotherhood of Spacers. Each ticket drawn after that will bump up one spot. 420 MLG were then drawn again in position SIX (same chance as any other team here) so that draw will stand.

We are only able to do this thanks to the fact that 420 MLG were drawn FIRST and can then be disregarded meaning the odds are the same as if there was no additional card in the hat in the first place.

I can only apologise for this mistake, it was my fault and my fault only for not carefully checking the details before starting the draw.

can you therefore explain why all those who pointed out this “error” in the twitch chat were banned from the chat channel?

This is how you do damage control and public relations.

You admit the cock-up, explain the what and why of the cock-up, and then correct it without inconveniencing anybody.

While blaming it on the wife 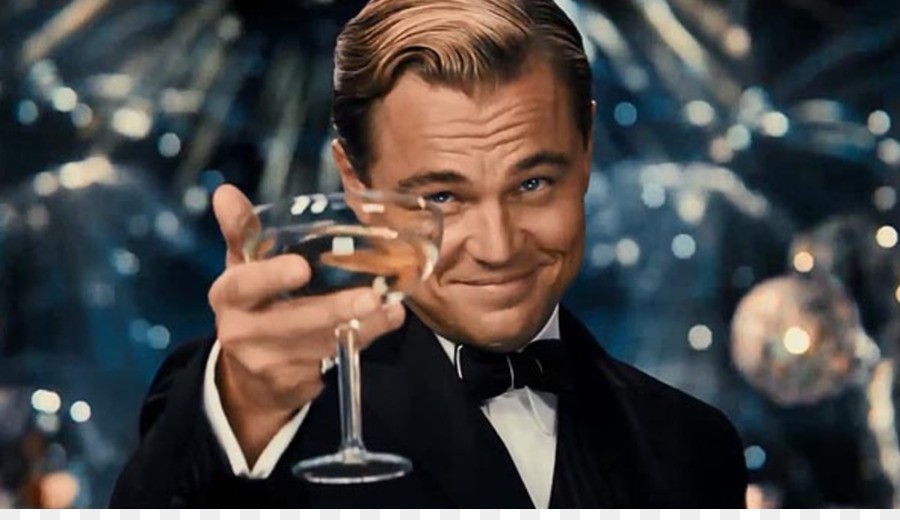 That’s a lot of words to justify why you didn’t immediately start over from scratch after you discovered the “mistake”. Like any other lotto would have done. Now you are tainted.

I agree the draw is flawed- and in fairness to all should be redrawn with the right amount of tickets in the hat. while mathematicaly your “fix” does remove MG420 from the results, it doesnt take into account the randomness of the draw. and for that reason it is flawed beyond repair even coming in 6th place they still had the advantage- Once you introduce logic( in this case mathematics) into a random draw it is flawed and no longer random, removing their first place doesnt alter the fact they still had a second ticket to get 6th- they had two chances to get 6th when having first they should have had no chance at all of a second placing - I dont know who taught you logic and how it affects randomess but you need to rethink Just do the right thing and redraw where everyone is equal

it doesnt take into account the randomness of the draw

Yes it does. Once the first ticket is removed and that draw excluded from the results the pool is now a correct random draw with the same odds as if it had started the day with no double ticket. You’re just like the people losing money at the casinos, assuming that somehow prior RNG results influence the current draw.

Correct. And because EVE is a game where scamming, bribery, etc, are all legal and encouraged there is no problem here. Even if the draw was rigged it’s a perfectly EVE-appropriate thing to happen. Perhaps you should consider using in-game methods (war, scamming, etc) to punish those you feel are guilty?

Nope they had two tickets- one more than any one else- that gives then double chance of a place, in this case first and 6th if only one ticket is valid then the other is forfeit- and that is the organisers response- However they still had two tickets, reducing the odds for all the other allainces By removing One from the results doesnt change the fact that during the draw the other alliances were massively disadvantaged- and by simply removing the first place result dosent change the fact that to get 6th 420MG had two bites at the cherry- its not rocket science -the draw was flawed- do the right thing and redraw with the right number of alliances in the hat

Nope they had two tickets

No they didn’t, not once the first pick was discarded. Picks 2-9 were a perfectly random draw of 8 tickets from a pool of 15 with each alliance having one ticket in the pool. The existence of something happening prior to that sequence of picks is irrelevant.

And, again, even if it was rigged it doesn’t matter. Rigging an event to favor a particular alliance is a 100% acceptable thing to do in EVE. Feel free to lobby them for a re-draw, but they have absolutely zero obligation to conduct a fair draw or prove its fairness to you.

as soon as they had two tickets in the hat every other alliance chances of getting in were reduced- do you agree on that simple math?

And, again, even if it was rigged it doesn’t matter. Rigging an event to favor a particular alliance is a 100% acceptable thing to do in EVE. Feel free to lobby them for a re-draw, but they have absolutely zero obligation to conduct a fair draw or prove its fairness to you.

That’s more like it. Way better than trying to prove something with your serious lack of math knowledge.

they have absolutely zero obligation to conduct a fair draw

Yup I think they showed that

as soon as they had two tickets in the hat every other alliance chances of getting in were reduced- do you agree on that simple math?

Nope. Because the draw in question is picks 2-9, where each alliance had one ticket. The existence of some unrelated events prior to picks 2-9 does not change the fact that those picks were a random draw.

Basic understand , Alliance A has one ticket has a chance of ONE place - Alliance Two has two tickets now has a chance in a random draw of TWO places, Alliance two gets first and 6th place Allinace two gets caught with Two Tickets , one is removed- they still had double the chancee a second place in the random draw, the fact one was removed after the draw is totally irrelevant they still had the advantage and two bites at the cherry

Not during the draw of tickets 2-9.

And, again, who cares? If the draw was rigged they’re certainly not going to re-draw it with different results. At best you’ll convince them to fake a “correct” draw with the same desired result.

There was no second draw they only removed the first place

Correct, there was no second draw. But the draw of tickets 2-9 was a correctly executed random draw of 8 tickets from a pool of 15 with each alliance having one ticket in the pool. The existence of pick 1 is irrelevant when you only consider 2-9.