Posting this because CCP wont 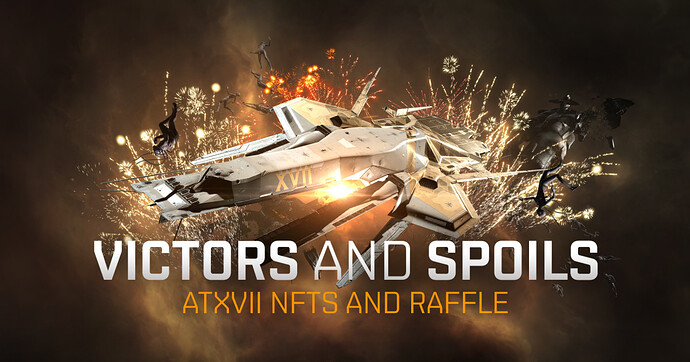 CCP seem to have once more failed to listen to their playerbase. They are determined to get NFTs into EVE oneway or another. During the AT it was announced that NFT killmails will be made and handed to those that made the kill. However, they also stipulated that the first 10 would get a bonus of 20 Tez ontop of whatever they sold it for. The fact they handed out 75 and are STILL desperate to get 10 people to sell them show how much of a failure this idea is and will be in the EVE Community (as in others), so they have introduced a raffle.

I for one have no intention of EVER going down a crypto/NFT route. I have even publically stated that if someone gifted me a hard drive with bitcoin or etherium on it, I would destroy it. I dont want to have any part of an industry, no matter how “clean” it claims itself to be, helping ruin our planet. CCP should know better. But clearly they do not and having CCP Hilmar wax on about how good this nonsense is going to be in news articles. needs to stop.

And a direct message to @CCP_Hilmar - I have no confidence in your leadership anymore at CCP. You are a serious threat to the integrity and continued survival of this game, especially if you seem to want to insert your fingers into your ears and believe that you know better than your player base. Listen to us, rather than what you have read in CEO Monthly.

NFT’s = No f ucking thanks

I have even publically stated that if someone gifted me a hard drive with bitcoin or etherium on it, I would destroy it.

Or you could give it to me and I give you an empty hard drive instead that isn’t “tainted” with evil crypto.

I will totally try to get that stuff from CCP so I can immediately sell it for more Bitcoin.

Quoting from reddit
“On a different note - don’t Dovblegs usually have a forum link to “discuss”?.. Where’s the one for this ■■■■?”

Two things can be true at the same time:

Yeah f this. I needed some disposable cash for my Switch, so guess Im unsubbing for a while.

On that note, we should probably start to think about selling mining permits as NFTs.

Knowing the OP, they aren’t an idiot.

The climate impact argument is valid, in appropriate context. Proof of Work systems, on our current energy production systems in many parts of the developed world, are a nightmare. It would be a negligible issue if we were already, say, on a Nuclear/Solar/Wind primary triad of power generation.

Full disclosure, I hold Cryptocurrency, in some capacity, primarily in Proof of Stake systems.

I, generally, understand the reasoning and spirit of the posting made by Arline, having discussed these sorts of things in private on more than one occasion. While the articulation could be better, the passion of it is clear, in my mind.

If EVE started a direct crypto tied to ISK, or anything in-game… well, I’d pull my subs and biomass… painful as that is to say. I’ve got four years of history, reams of RP, kills, fun… managed to get some of my insanity canonized in the game world news… but that’d be my bridge too far. The NFT thing is somewhat Skeevy as is.

Can someone explain to me (like I’m an idiot) why I should care about this? Why is this bad? Because right now I couldn’t give any less fucks about it. Give me some new ships to do ■■■■ with and do all the nft or what the hell ever you want.

So basically when someone comes to you with his NFT proposal, he might see it as the “cutting edge wave of the future!”. You should probably review it with all the same trust and acceptance you would of a person offering you an “amazing deal” on “untouched, pristine land in Florida”, “Brooklyn bridge futures”, and “ground-floor investments in the lunar hotel and casino industry”.

From a strictly-EVE point of view, this looks like another hare-brained “hey let’s develop Dust 514 for a console platform at the end of it’s life cycle!” type notion.

I’m admittedly not at all invested in this crypto thing so I really still don’t get it. I’ll just continue being mad about the scarcity and mining changes you fiance types can run on with this one. Thanks for the explanation though.

The climate impact argument is valid, in appropriate context. Proof of Work systems, on our current energy production systems in many parts of the developed world, are a nightmare. It would be a negligible issue if we were already, say, on a Nuclear/Solar/Wind primary triad of power generation.

Can you help EILIF on how this is bad for the environment vs gameplay in general? (I get that each mining rig consumes more, but what is that impact as compared to the volume of people playing games and again people using electronic devices in general)

What we need to go with those NFTs is a captains trophy room: if you are docked you can leave your ship and wander around in a special room designed to showcase your NFTs. That sounds so amazing, and would definitely be better than spending Dev resources on other game aspects.

It takes A LOT of processing power on top of what you’re already doing. Like, a lot lot. Power consumption gets kinda silly with that stuff.

Perhaps, but again: this is ON TOP of what’s already happening and it’s not for something we need or do on a daily basis. That goes for more things but mining might just be the most BS of them all.

Proof of work systems, in there current form, due to their nature in requiring exponentially more complex algorithmic data problems to ‘mine’, require an exponentially more brute force, power hungry energy draw. At last estimate that I read(worth taking with some manner of skepticism of course but worth consideration), bitcoin specifically, currently registers about .5% of the world’s yearly energy production and consumption. That, may not seem like much, until you consider that’s more energy consumption than some 1st world countries outright, often done in places with cheap, less than ideal energy production systems(like coal, previously, China was the world leader on that until their government outlawed/cracked down on it). Let’s put that into some perspective. Roughly on the order 50 or so million households per year. Which, if memory serves, is more power than the Netherlands uses in a year.

Ethereum(we’ll disregard that they’re planning to move to a less energy intensive, and far less carbon footprint producing Proof of Stake system in the next year or so), currently eats about a 10th of that. Still significant, and maybe to contextualize, is more energy consumption than Peru by a good mile.

For such a small set of systems, that power draw is insane, as well as the proportionate carbon footprint from existing mainstay power infrastructures where they’re most commonly produced.

Does that help to highlight it?

Its going to be so amusing when the world economy crashes and electricity isn’t available to most. Digital currency is the biggest scam ever, invented by the energy wholesalers to boost thier portfolios.