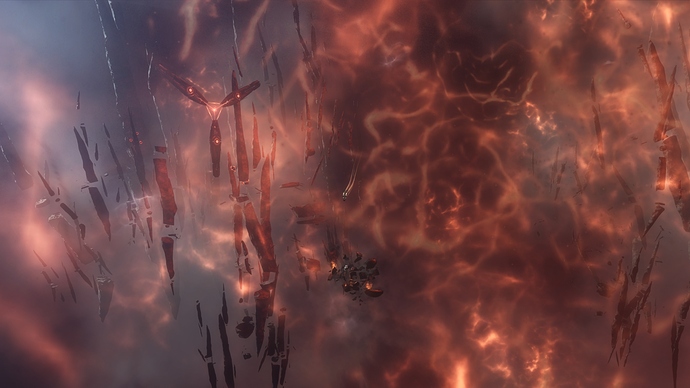 Please use this thread for General Feedback.

The August release brings a rework of the system for enforced peace periods, as well as the end of the transition period for non mutual wars that do not have a war HQ.

In addition to this, the release of the Community Fittings system is here, with a small selection of new player ship fittings submitted by the EVE community and curated by the wonderful members of the ISD Team.

This release also contains a number of user interface, graphical and gameplay fixes that round out or second light Summer release before we head into the fall!

Do mutual wars work yet?

What issues are you experiencing with mutual wars? Have you submitted a bug report?

Well basically that nothing happened when I tried to make an ongoing war mutual.

I havent tried in a bit though because I just wrote off the loss and moved on.

I had meant to file a report but it slipped my mind. Will do so if it happens on my next attempt.

Thanks for the response,

As of the War changes we made in the Invasion Release, Offensive Wars cannot be converted into Mutual Wars.

See the “Improved Mutual Wars” section of this dev blog for the full details.

the full patch notes link above goes to a June release…

the full patch notes link above goes to a June release…

lol sorry, this is now fixed

“Triglavian Recon vessels have been sighted outside of Invasion zones.”

This is just what i wanted, keep turning up the Triglavian dial CCP!

Ah ok I had no idea theyd changed so dramatically. Cool will check it out!

My inner triglavian turncoat is so damn happy for This!!!

“Triglavian Recon vessels have been sighted outside of Invasion zones.”

This is just what i wanted, keep turning up the Triglavian dial CCP!

Agreed. But also, either more ISK and LP from the actual conduit sites or… bounties from all the trig rats, even if low (event rat bounties/HS anom frig/cruiser rat bounties, nothing major) or… some other way to balance the risk vs. reward, please!

I dont know about any of that, ive been making plenty isk how it is now.

I would just really like some anchorings warping around, camping gates!

They never do that? Not even in Foothold systems? Very surprising.

I’ve heard that if someone’s fighting a roaming fleet on a gate that the reinforcement wave can bring in anchorings (I guess in all 3 system types). If someone wanted to be a prick, they could do this on purpose and then MJD away (or jump through the gate) rather than killing the anchoring rat.

Edited to add: oh, and I personally haven’t done any Trig stuff since July, been trying to get together with a corpmate who’s been running majors and world arks but he’s AUTZ and I’m USTZ and yeah, timing hasn’t worked out, plus tons of people just majorly idle/AFK these days in my circles. But I’ll get back after it in a bit.

But last time I ran some (just minors and roamers mostly back in June/July), there was little reward relative to say running incursions, and the main reason me and most I was doing it with were doing it was just out of curiosity/to try something new. If these are here to stay for awhile, they need to be tuned to be a bit more rewarding for everyone, right now they’re mostly rewarding for ninja salvagers and looters (not that there’s anything wrong with that, would just be nice for the ones actually generating the wrecks to get a bit more guaranteed cashola for their risked shinies).

and then MJD away

You can’t if scrammed by an anchoring rat.

You can’t if scrammed by an anchoring rat.

Ooops, forgot anchoring = scram, not point like most NPCs. The reason we all fly ABs in the Abyss, not MWDs, after all!

Well, jump the gate, then, like I said as option B (the new option A).

Well, a couple of months ago I lost a Marauder to the Triglavians in an asteroid belt in a adjacent system when a reinforcement wave brought some anchoring frigates in I wasn’t expecting ( or ever before reported or shown in release notes). Adding to this, some other irregularities dealing with commands and modules being delayed/ignored by the server which actually showed up in CCP logs

, allowed the ship to be comped. Never have seen an anchoring since outside of a conduit area and I have been running solo against the random fleets for quite some time.
Guess it’s time to renew my paranoia and extra carefully watch those NPC icons flashing above my capacitor.