Same issuse , try running client is DX9, it works but is grainy

Opening it in DX9 gets the client to open, but it’s still dead in the water, and the client will crash if I change windows to anything other than the game client.

i tried earlier and it worked as normal without changing anything…

Open Chrome (if present, any website will suffice), launch game, set “Fixed window” instead of “Fullscreen” and the game should run without crashing with normal FPS level.

^Exactly. I can never find proving conduits in my USTZ unless I play in the mornings 1400z.

The keyword here being “can” You ask why stalemates are possible and feel as if you have been betrayed by CCP because of their own words and description yet you fail to acknowledge that nowhere in your original post does CCP ever state two will enter but only one will leave - they state verbatim that "two enter but only one CAN leave. No one was ever promised or given the expectation to believe that they will be able to leave for sure, only that the possibility exists for them to be able to le…

posted it again in the new known issues thread for august release, might ccp answers there…

there you find about a dozen more abyssal pvp threads, all stating that proving conduits don’t spawn in US TZ

We’ve been digging into the code on this and I update our internal resource, but neglected this thread.

CRASH: Clients set to DX11 may crash on start up on Integrated Intel GPUs (workaround: use DX9)

This doesn’t necessarily solve the problem. I’ve been able to launch my client using the DX9 setting, but if I ALT-Tab between windows on my system the client freezes up and crashes again. This may not be an issue for people with multiple monitors and such, but for people like me who are playing on laptops and moving around from place to place, this significantly hampers gameplay. I can’t even switch from one running client to the other without one crashing.

Since then I’ve tried various options, DX9 on/off, 64bit client on/off, hardware rendering on/off, but no noticeable improvement on any of these.

Then I thought it might be something to do with the UI, so I hit CTRL + F9 to hide the GUI and my frame rate went from < 3 fps to > 60 fps … hitting CTRL + F9 to enable the GUI immediately brought the frame-rate down again to < 3 fps.

I had a look in the ESC Menu under graphics and I had everything set to “Low”. The only thing I did here was to click “Optimise Settings” - I selected “Optimise for Performance” and straight away my frame rate improved to > 45 fps.

This is the only work-around that worked for me so far. Maybe there’s something that can be patched in the next release to help out those of us on older hardware…

failure to jump. running cloaked, land on gate, decloak, then sit there. not approaching, not doing anything, even though option selected for warp was jump. ran 43 jumps , failed 22 times

there is still bugs with some wars. not all of them have been fixed. there is a razor pirate war started 6/16 that is still continuing and it has no station declared and there is no end date on it. no it is not a mutual war.

Graphical bug on Target painter: the laser is pointing sideways but not on target… 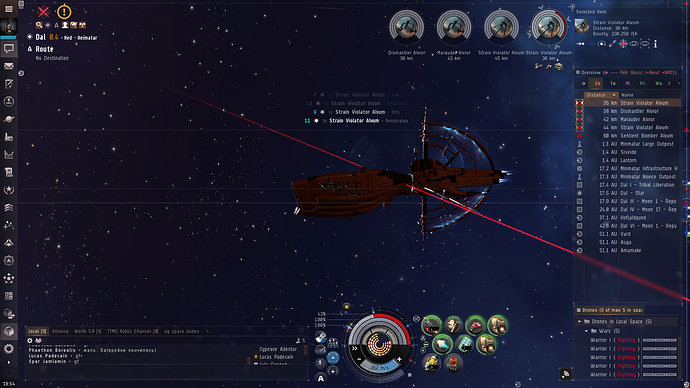 Yep , thought I was back on, but as you say crash occurs if you switch , not even a reply from the ticket system . Poor!

Thanks for the report Zaayr, wars with no HQ are not instantly cancelled on release say, but are instead checked the next time their bills are processed, this will be sometime within the week.

I hope this clears things up

Can someone please help me understand how to get eve to scale properly again on hidpi screens? I don’t have supereyes to play eve at 4k.

Even though the amount of screen estate is amazing, I literally have to crawl near my monitor to read things

@SPAECMARNIES and @Enyap_Xam, this appears to be an issue with the suppressed setting you have saved.
A workaround for this is to go to ESC> Reset Settings and in the first column, reset the option for the skill purchase.

Thanks for following up. I don’t have this extreme, but still the problem that FPS degrades over time from healthy 60 FPS to stuttering and fluctuating <20 FPS. Same scenes. It looks like it gets worse faster the more windows gets opened and closed and session changes occurred. Only relog will rectify the issue (after some startup time of low FPS even in char selection mode). I will check out the options you used.

Also for ages I have low FPS after startup (even on char selection screen), which is fluctuating and improving over a time of a couple of minutes, until it suddenly jumps to 60 FPS, like something got “switched” in the client. Precisely at this “switch event” loglite also writes an info message about the used memory, but nothing else. The slow FPS period is shorter on subsequent restarts of the client.

The two symptoms seem to me similar, but the degrading is much worse of course because it doesn’t heal itself eventually.

Using Thinkpad W520 with Quadro 2000M card and latest NVIDIA drivers for this card on Win7.

If it’s not Win7 problem after all… I also have these issues you describe, though I thought it’s as the core heats up the FPS goes down… but it’s more like something’s not quite optimized and now it just grows more extreme as more things wrap around.
Maybe we will live long enough for this to get resolved. Maybe…

Was also thinking about temp, but temp monitors didn’t show something unusual, also my CPUs are almost idling with EvE running. The bottleneck is the GPU.

I’m looking for a new PC, but I’m not looking forward to get all my stuff migrated … collected and optimized over the last decade …