What is your best DED run you have ever completed? This is how it works.
DED Rating - Complex Name
Profit: Your best
Ship Used: Your ship

DED Rating - 3/10 Guerilla Grounds
Profit: 470mil EST (cant remember what I sold it for, was in 2020)
Ship Used: Caracal (i remember the site taking forever to complete)

This was a long time ago. In those days once you got the key, you could stay in the site all day. When someone else pops in, you target them and they run away most of the time. If not, they’re usually in a frigate and I’m in an Assault Ship. So they’re leaving voluntarily or in a pod.

It’s two pockets where the first one has key in a secure can that unlocks after killing specific NPCs in that room. As I enter someone’s already in that pocket clearing NPC and moving to the can so I mwd there and we get there at the same time.

Since most people are slow I spam Open Cargo on the can as the last important NPC dies and grab the key, this makes the other guy very angry and he unleashes cyrillic nastiness. I’m prepared for such occasions as my Ishtar is PvP fit: heavy tank, 2 med neuts, scram and web. I grab something from one of his wrecks to go suspect and he immediately attacks with his Gila.

His Gila drops 400 mil in modules and explorer loot, I proceed into the second pocket and the phi outpost bs drops 210 mil. Afterwards he sent me several mails which after translation were the best loot really.

Angel 4/10 Contesting head to head with other player. Just as we finish the site, Orthrus lands in the room. I managed to get the boss wreck and rushing to loot. Orthrus starts locking me but he is like way over 40 km out. I thought, bait or trying to scare me out. Loot in and in same second I hear buzzer going out. Panic mode on ( at the time probably one of my first PvP ish situations). Before I managed to understand what is happening I see concord landing. Orthrus aggressed. Dropped around 700 mil. Site was a trash. I tried to bait some salt in local but he ignored. Third guy was siting in one spot for few minutes. Probably even more confused than I was.

As far as most isk. I got 2 guristas 5/10 hisec escalations in row. Managed to clear both with my gila and both had same loot table. Over 1 bil loot and gila BPC. In less than 2 hours I made almost 3 bill isk.

Does stealing someone else’s loot from such a site count as running?

Besides the obvious of running with the loot?

If it’s part of that DED run then yes, it’s what the OP asked. When you count mission income you also count loot, salvage and lp.

But the guy that actually runs the site and produces the loot is different, I just grab the juicy drop if RNG provides otherwise don’t bother.

Anyway it was just a funny way of saying there are more than one way to interact with these sites than just simple ratting.

Best was a 6/10 serp escalation, escalated to xyz in cloud ring on the last boss the loot was just the after effect’s but as I warped out I went to a random belt on that belt was the officer Brynn with about 4b xD Think it was the enam + sensor booster and something else cant remember the last.

Actual ded runs I think was also a 6/10 serp with about 1.2b. cant remember the drops was years ago.

i never did much combat sites , the most memorable PVE i ever made was jumping in a wormhole in a paladin and almost getting killed cleaning a Instrumental Core Reservoir, them came back in a t2 mining frigate and making a lot of iskies in gas

for some reason i like to mine ICE , i find it zen, but the money is so bad the only money i really did on ice was buying and hauling to jita in a providence (did it a lot)

gas was different , i don’t particularly liked to mine it , but i did a lot of wormhole day trips for gas wen i lived in HS and wen i was in the goons i made 100% of my isk at the time mining null gas because i dislike the other activities more

edit: btw i love to share tips form the things i discovered in EVE
you buy a orca but you don’t use it for nothing , you just put a nice cruiser , a cover ops frigate and a mining frigate inside , them wen you find a good wormhole you take the orca , park it in the closest NPC station and you can do it all , at the end of the day you put the ships back and the gas and go away, the orca is a mobile HQ , its a nightmare in logistic to have to move separate ships to do the work

Since we all know @tutucox_Khamsi is one of the all time PVE greatest players this means alot. Tutcox has done more to advance removing PVP from this game and push for PVE only than anyone else and we salute him for this great achievement.

trust me i’m an expert 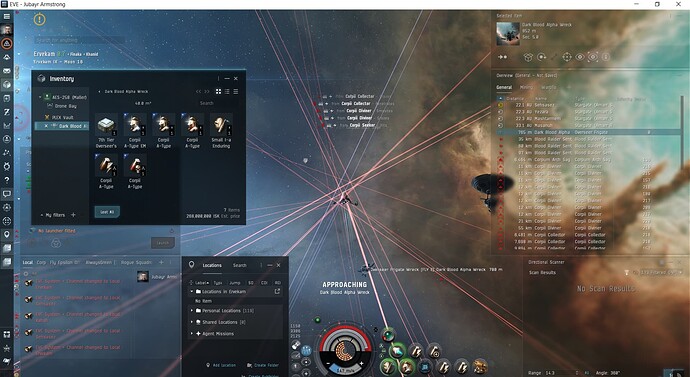 This type of drop is very rare (268 million), but remember, loot drops can go anywhere