Okay but what do you spend the profits on that you acquire through mining (and assume through industry and trade)? Don’t you spend it on some skills or something?

But you were going way off topic here but I used to always give my isk away and now I had been saving my iskies.

Well maybe you could optimize your stuff to get a better profit ratio. Btw you mean you started the off-topic with your inquiry about the Gila.

Yes my bad, let’s focus on DED runs, what system do we find them in please?

You can check the agency window (exploration section) for anomalies and cosmic signatures. The sigs can be DED sites and running the anomalies can produce escalations which are also DED sites.

DED 3 and 4 can be found anywhere in highsec or lowsec.

You can get DED 4 as an escalation from hideaway or refuge anomaly, which can be done in highsec too.

DED 5 can naturally spawn as signature only in low. But it can be gained as an escalation by completing den anomaly. And this escalation has a chance to be in highsec. Chance depends on region, but usually it is going to be low or null.

Can’t say much about DED6+ never done these as it requires t3c which I never trained into (t3c for safety reasons as it spawns in low/null only).

A DED 5/10 can occur in high-sec but very rarely. I have had that happen twice

This griefing thing, if this is a joke then haha but you know some things we should stop bring it up as the way I see it is that the community is losing a valuable capsuleer. There must be more too it as HatelesS used his Kaboom Cruiser fit and bumped an Orca so far off the belt but now that vod had taken down.

Let’s just curb discussing about it and even coming from you Sir I think it calls for a Karren complaint on Vinnies next Stream. I now want to see you on the list for WHPD.

Inclosing wouldn’t it be great to see the release of the Astra Police Skin!

But it can be gained as an escalation by completing den anomaly. And this escalation has a chance to be in highsec. Chance depends on region, but usually it is going to be low or null.

In minmatar space (angels). Refuges and dens escalate to 5/10’s. Other factions is just dens.

Escalations can spawn up to 9 jumps form system you get it (ignoring any system security). It don’t depend on region. Technically it is. But you make it sound like specific faction have higher chance. While it’s only EVE map geographic. nothing more. You effectively can find systems where you have 100% chance for only highsec escalations

What this thread reveals most of all that there are a lot of prolific posters who know fck all about the game.

May I step up to the plate and could I take a swing at your fast ball? Or am I the one who is always being struck out.

Was that ever a thing or is it just Rattlesnake Im thinking of?

‘Subverted’ JVN-UC49 is a medium drone version of the Gecko but where do we get them from?

Only playing since 2017 so not sure what was before but I never saw, read or heard about Gilas using geckos so I think it is safe to assume that yes you confuse it with the Rattle (or even Ishtar).

where do we get them from?

Fair dos. They work well in a Stratios too. Impress noobs by doing SoE in one.

Wasn’t it like a free gift in the form of BPCs during some event or such?

They have been at least once though the original bunch were gifts from the Yule Lads.

Was that ever a thing or is it just Rattlesnake Im thinking of?

More commonly used on Rattles, Stratios, Ishtars, some others. Gila doesn’t have the bandwidth for one.

It was a thing a long time ago. I do not remember when they did change the Gila to it’s current form but I can state that I remember flying them with heavies and even sentries at some point.

“I really like the Gila. Its more maneuverable, can fit 10 sentries, 5 heavies, and 5 lights, and I can mission in other places with no problem. I fit exp/therm ammo, as that hits most NPCs on their primary or secondary, and exp/therm drones (I keep some in the cargo bay in case I need to switch).”

While I don’t go suspect to steal loot it has been really fun contesting the Union Day sites just like the Christmas event. My best steal was sadly only a Raven Jita 4-4 skin. Literally caught the guy on the LAST TWO npcs!! SWOOPED IN. Killed the commander and ran laughing at myself

Like my god I felt so bad… EVE really brings out the worst in normally good people. I love it! 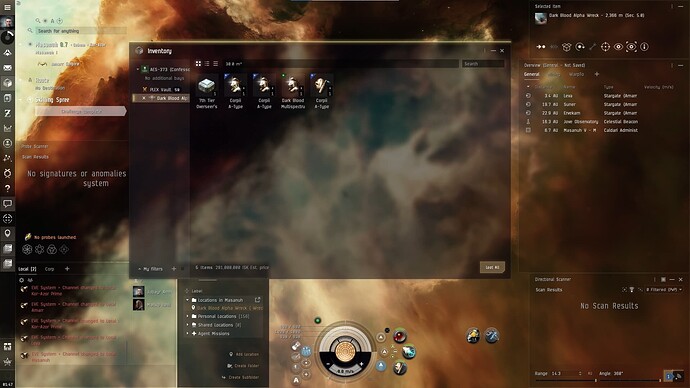