First, welcome to Eve.
Second, train destroyers.
Finally, to honor your question the Comet. I can fly any frigate in the game and I still buy these. Shoot me a message in the game and in time (not my main) I’ll send you my very special beloved staple fit which you will understand …probably sometime later
:)

Well I got the ISHKUR!

And… if you have the time to talk me through your fit and the choices you made (and how to fly it) that would be awesome!

pffff, I am a newby here and I have no CLUE what you guys are talking about. But I’ll buy the ISHKUR and now all I needs is to find a good fit…

What they were talking about are the following:

Generally in PVE you get sustained damage so a regular DCU is better than the assault version. And if you know how to spiral in, you won’t take a lot of damage while approaching enemies.

Just like in another thread with a similar question, in my opinion, only YOU can decide what feels good for you.

7 years ago we had a huge “tiericide” project that made a good balance, that is now way out of balance between all the ships in New Eden at the time of the project.

The goal of that project was to make sure that there was no “best” ship anymore and in the same ship class you would have a pretty even level of power for the combat ships, some ships got a new role as logi ships and except for the Blackbird all the electronic warfare ships were nicely balanced within the same ship class.

Now we have some very (un-) balanced new triglavian ships that are better than any other ship in the game but if you ignore those for the time being, all the previous factions are pretty balanced and you have to decide for yourself what kind of combat-style you prefer to fly.

If you like that someone else is fighting for you then check out the Tristan or if you like to deliver a lot of pain at close range, you may like the Incursus.

Once you have secured a better income for your habit, then the Navy Comet would be a stronger Incursus without the local rep bonus.

The Tristan however doesn’t have a direct Navy cousin, so your next option would be in the next bigger ship class, the destroyer class.

It depends on what you like. Always go for what YOU like and not what someone else likes which may lead to bad experiences when it doesn’t fit your expectations.

Thanks for the time to explain! Much appreciated!

I don’t know what I like yet, this is my first step away from mining towards fighting and fighting PVE seems the logical first step.

My next step is to move from drones to turrets and maybe then go electronic followed by moving up a class. :))

I would say Imicus, but its so ugly it doesnt deserve place on podium.
It can field drones so can fight and scan and do exploration really nicely. And thats where is cash in frigate PvE.
https://wiki.eveuniversity.org/Imicus 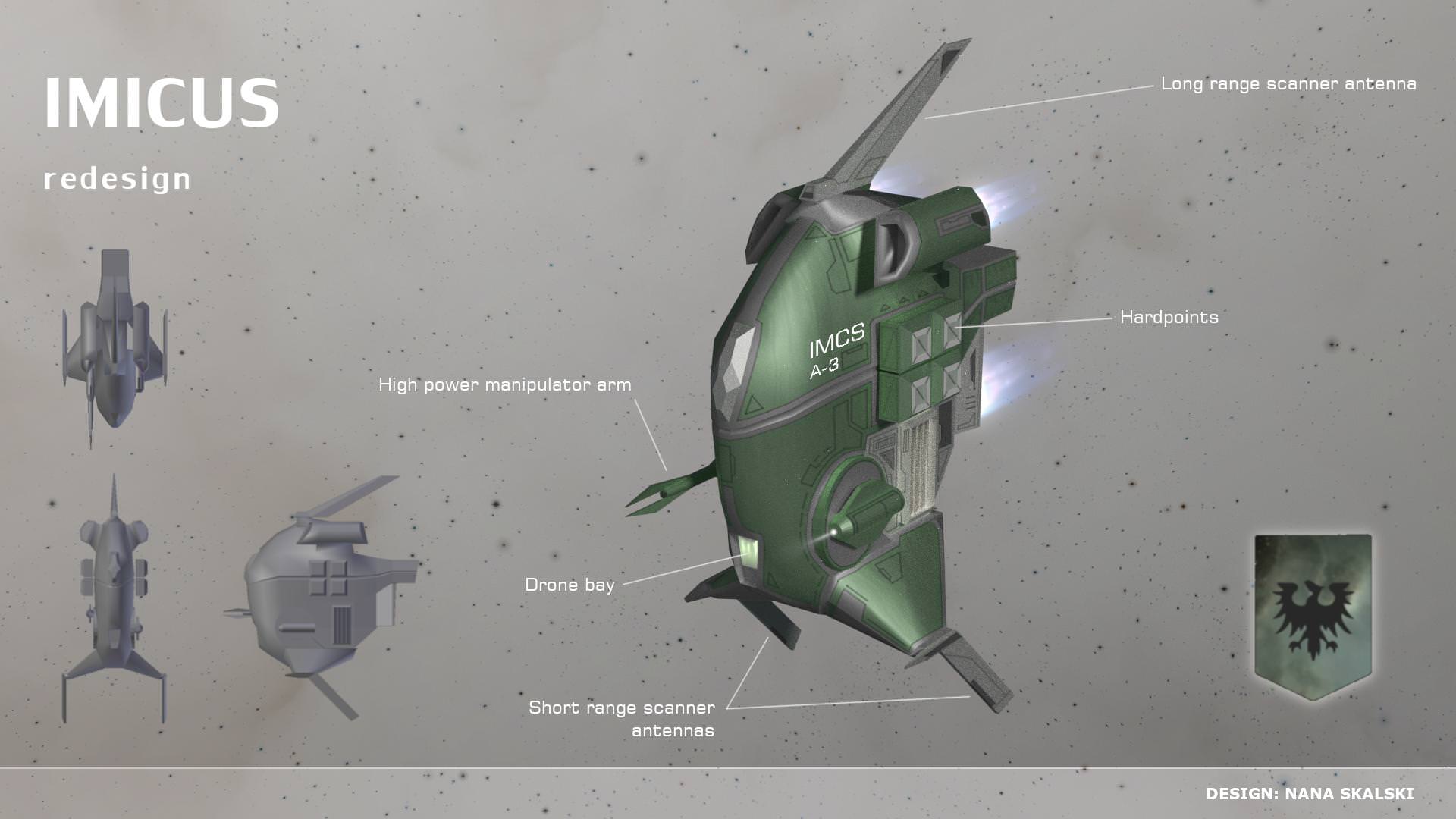 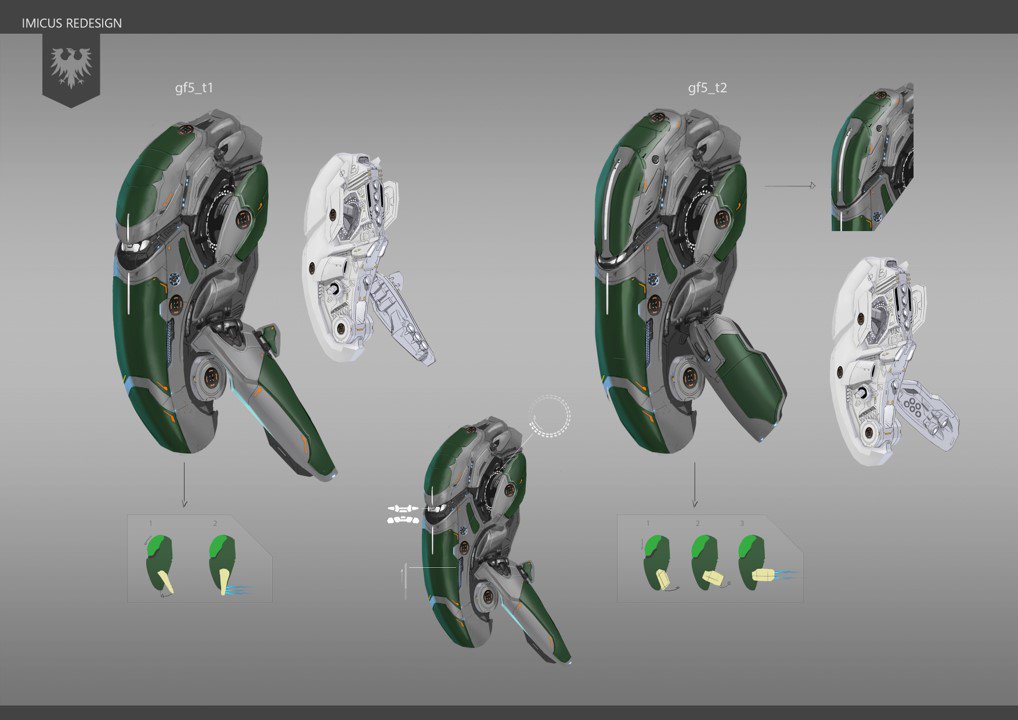 I would say Imicus, but its so ugly it doesnt deserve place on podium.

Oi, why the hate for the Imicus?

I love how that little frigate looks, it’s one of my favourite ships together with his T2 brother. Sure, it doesn’t have a symmetrical hull, but that’s part of the charm of the ship. I don’t get why some people want all ships to be symmetrical. Nothing wrong with symmetrical ships, but most ships are already symmetrical and it’s much nicer to see some variety in EVE ship design by having a few asymmetrical hulls.

I agree that the bottom redesign you linked looks really bad: it would be a massive step backward from the current Imicus. The current Imicus looks like a fragile exploration frigate and doesn’t need to look like a sturdy cocoon with a tiny asymmetrical twiddling leg on the side. You can say what you want about the current Imicus hull, but at least it looks like a stable hull that could stand on my desk with it’s (admittedly different) legs if I were to 3D print it.

The upper redesign looks a bit better and more like the fragile exploration frigate it’s supposed to be, but to me it seems to be too ‘aerodynamic’ and they took away all the asymmetry.

We don’t need our ships to be aerodynamic in space. And I want the Imicus to be the functional fragile asymmetrical exploration frigate it already is. /endrant

You cannot redesign ships. It would interfere with Skins!

I dont hate it, only think it deserves a lot better. By proper redesign that is.

Gallente ships just look like they’d fly in circles. I can’t help picturing that in my head.

The Imicus makes me think of Gumby…with a kickstand.
How can you not love Gumby?

It’s not about the asymmetry really, the design overall is unpleasant. People don’t make such a huge deal over the Atron which isn’t too pretty itself, but the design is passable and falls in line with the ship’s role and strengths.

I can almost bring myself to accept Imicus for what it is, it does have the recon features going for itself, but so does Heron and I don’t feel like I’m looking at a trashheap when I’m zoomed in on it. Celestis and Imicus are long overdue for a trip back to the drawing table in my opinion.

if you’re starting missioning an Incursus or Tristan will get the job done as far as Gallente ships go(the Atron in theory could do but its paper thin). you dont need to jump into anything higher to run L1s. just make sure the ship is properly skilled up and fitted (you dont even need to have expensive modules, regular T1 will do fine).

it depends more on which weaponry you favour, most people will probably go with the Tristan because hurr durr drones are very efficient for PvE, but you could very well go the turret side and focus mainly on Blasters/Railguns with Drones as a support element agaisnt smaller enemies.

As a newbro, Tristan with a bunch of drones makes most ratting so easy it’s almost boring. I’ve started using some of the brawlers (Atron, Incursus) for a change just to make things a bit more interesting.

On my alt, an older player sold me his Caldari Navy Hookbill for a good price. Has some T2 light missile launchers and solid tanking, and basically one-shots most L1 guristas. If you have the money to spend, that’s also a good choice. A bit more fun than orbiting at a large distance with a Tristan and basically letting the drones do all the dirty work.

Tristan is an A or S class T1 frigate, but requires drones V.

If you don’t have Drones V, then Incursus is probably the better option. Comet if you are willing.

As far as the Ishkur goes, I would say the Nergal is the far superior Gallente Assault Frigate

(It was made by the Gallente, look it up)

I just finished building my Incursus brawler (close to 100 dps and CAP STABLE), and I have to say it’s a fun little ship to go shooting up rats with. Too bad it can only fit a single small drone, but it still can take L2 combat anomalies with ease.

Yip agree the Nergal with good skills,implants and the right fit for the role can be deadly.

Only limiting factor is what to mount in the second highslot, completely dependent of role its been used for.

My opinion is not based on the fact that I build them, I assure you.