I also know of no instances where a permit holding miner has been ganked. If you do, please post the mails.

LOL. How can you be that naive? Permit holders are ganked all the time for the simple reason that many of them don’t understand what it’s all about and think getting a mining permit is all they’re being asked to do to avoid being ganked.

And no, I’m not going to go look for those killmails, but there have been examples of this in the minerbumping website even. Just ask some other agent that knows better if you don’t believe me.

KNOWLEDGEMINER, this is a NO SCAM ZONE. Do not try to trick new players. You know very well that the permits are valid and legitimate, and you yourself are a shareholder in the New Order! Do not spread misinformation here!

, and you yourself are a shareholder in the New Order

Yep, check the shareholders list, Knowledgeminer is amongst those who will be summoned before James in Hek, on dividends day. I can only pray that on this day, Knowledgeminer has the wisdom to purchase a mining permit.

The following is a list of the New Order's shareholders. Shares may be purchased by sending isk to James 315 . Please include "stock purchas...

Wow. It’s pretty clear. Kind of hard to know who to trust…

please, even CCP considered your “permits” a scam

[Guide] How to spot a Scammer. [Work in progress] New Citizens Q&A

Mining Permit Scam On the contrary of some organizations or groups’ beliefs, that often say that they are the self-proclaimed police of Highsec, no single group or organization can hold sovereignty over all or any parts of Highsec space. One organization does come to mind, as I’m sure you’re also aware, but for the sake of this “article” it shall remain unnamed and it does not matter to the point I’m trying to make here. So this sort of scam arose with the significantly increased activity in… 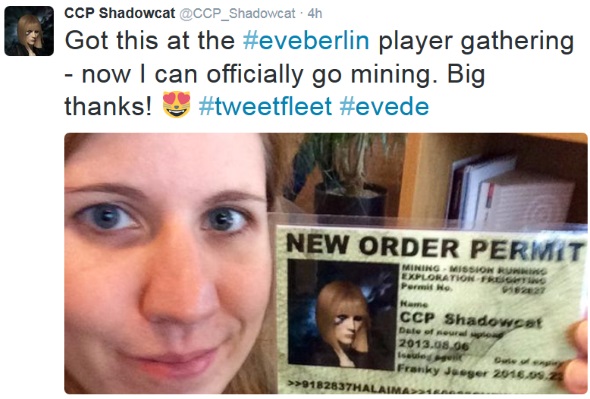 KNOWLEDGEMINER, this is a NO SCAM ZONE. Do not try to trick new players. You know very well that the permits are valid and legitimate

LOL. And this contradicts what I said exactly how? Where did I say anything about the permits not being “valid and legitimate”?

Do not spread misinformation here!

I never do. Not here, not elsewhere.

Wow. It’s pretty clear. Kind of hard to know who to trust…

ROFLMAO. You’re getting lost in all the trolling. Check this minerbumping article for the story behind the “purchase” of those shares: 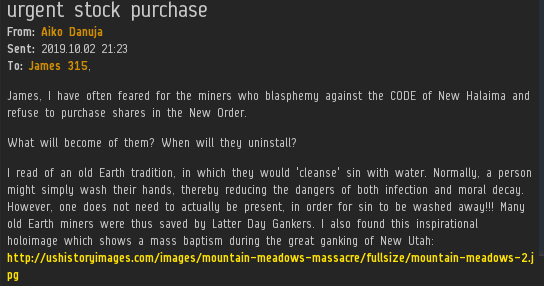 Over One Trillion Eight Hundred Seventy-Nine Billion in Shares Sold

The EVE community at large has long been fascinated by New Order shares. We'll explore an aspect of our share program in a moment, but first...

Not that I have anything against players purchasing shares of the New Order or that it would make a difference to anything I’ve said here or elsewhere if I had actually purchased those shares, mind you.

@CCP_Shadowcat Where are you? Come gank with us.

I’m not going to go look for those killmails

In other words: It never happens. Thanks for elucidating that for me!

In other words: It never happens. Thanks for elucidating that for me!

It’s been a week and I’d like to know if there has been any update on this bounty hit.

I’m still willing to contribute an extra 30 million ISK as additional reward once we get confirmation of a successful hit.

Nobody has claimed the bounty, although I imagine there aren’t very many people terribly interested in chasing down a procurer who logs in occasionally. Nevertheless the bounty stands and is available.

While you are free to offer to increase the bounty price, please note that many people harbor doubts about whether a bounty will be paid. If you send the 30 million isk to me I will be able to guarantee payment with the full backing of the New Order Treasury and Currin Trading.

Regardless, I assume at some point the miner will face justice.

If you send the 30 million isk to me I will be able to guarantee payment with the full backing of the New Order Treasury and Currin Trading.

I’ll send you the money when I see the kill. I’d rather not let you just hold it for who knows how long it’ll take for the hit to be completed.

Yes, I understand. Let it be known that Scoots has promised, on his own personal honour, an additional 30 million isk on this bounty!

How does this hold any seriousness compared to the official statement by an ISD member?
She is just interested at your antics like how wee see apes on the zoo cages.

I dunno, she seemed pretty interested when she jumped up and down and clapped her hands and shouted, “Hey, everybody, I got a mining permit! WOOOOOO!”

I doubt that
But to be accurate, I’m guessing a few minutes later someone else came in, attacked her claiming she was committing “bot aspirant behavior” and you all posted it on your website.

What happened that CODE cant do it themselves like it used to be? Unarmed and not dangerous seems to be perfect target for CODE enforcers.

I’m guessing … you all posted it on your website.

The mind of a goofus. He could read the website for himself, and make an informed decision based upon actual evidence. Why not be a goblok instead? Just speculate and jump to erroneous conclusions, and then argue about the truth with people who actually know what’s on the website. What a fool.