Can I put my paid account on hold ?
I’d like to do this until the Disconnect/Log-in issues are fixed which seems that this will an extended amount of time.

Yeah, that would be nice but highly doubtful CCP would do that.

I don’t have it and many others too…

I log in normally and stay on for hours without a burp.

I hope they add a few days of Omega after all problems will finish,game is unplayable at the moment for few days.

According to the VERY low and frequently dropping numbers of log on users during these DDOS attacks, CLEARLY there are issues, and CLEARLY you should use “some” rather than “many” in your funny statement. Did i just get baited? I hope so.

I STILL can’t even log in, 4 days later. Off and on I’ve been able to log in but its so laggy it’s unplayable, for hte past 6 hours its literally https://puu.sh/F5BkT/8bdcedb0cd.png

According to the VERY low and frequently dropping numbers of log on users during these DDOS attacks, CLEARLY there are issues, and CLEARLY you should use “some” rather than “many” in your funny statement. Did i just get baited? I hope so.

FACT is what i see is(beside myself as an example,which would not be enough statisticly) is just a few people complaining here in forum and if i look at the server is see stable 25-28k online without player drops.

And yes,this is meant offensively because pc is not mine

Supporting OP’s idea. I have an entire month of Omega status left on my account since I extended it before the problems started, but now I have no desire to play until CCP fixes their servers. Yesterday my ship even stopped responding to commands, but I couldn’t even close the client…luckily I didn’t lose the ship, only one drone.

I explained that there is no real issue…

We have 8 replies here dude,taht’s nothing…

Servers are down right now buddy. Did i bite?

Yep. Your lack of issue doesn’t preclude the possibility that there is an issue (ie. your set of 1 isn’t significant).

What is significant is CCP’s views:

this is meant offensively because pc is not mine

Seems PC isn’t the only thing you don’t have.

They say some have a problem…does not,by any means say that it’s a ‘real’ problem…

But it’s not armageddon…

They say some have a problem

But it’s not armageddon…

No one has claimed that. People (many) individually have had problems. CCP acknowledges there is a problem. There has been an on going DDOS issue.

You can ignore facts to live in your bubble, but your bubble doesn’t match the reality that CCP are seeing of “many players”.

They’ve also described it as “widespread”: 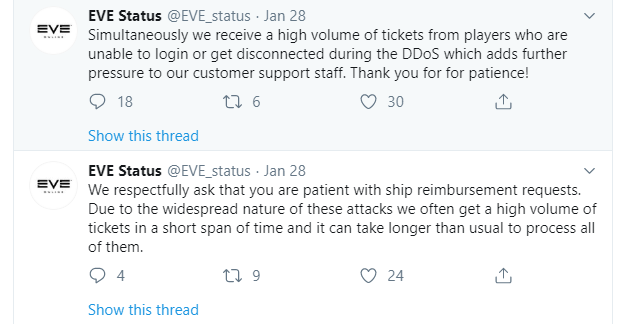 To make a real world analogy, few people are having cancer. If you come to a doctor and say that you have a cancer, it is viable for him/her to say “I don’t have it and most people on the world don’t have it, so you’re just imagining that you’re having it” and ignores your disease?

Not beeing able to Log in into a game for which you pay and complaing about that fact is reasonable and you would do the same if you werent on the side of those who currently cant play due to the DDOS attack aftermath.

No need to put our Omega subscriptions on hold. They should just take the game offline until the issues have been resolved (as I believe they have now done) and then add whatever time we’ve lost onto our accounts.

just leave it… we all know that he knows he’s being an idiot to annoy frustrated people. People elevate themselves however they can. He’s probably looking at the same screen as we are. Let him have his time of pretend superiority. pat him on the head, pinch his cheeks, call him a clever boy, and move on.

Sry guys but this is fact

And you are wrong…