Can't join Faction Warfare. Is this UI a bug?

I tried joining the militia and according to this UI, it says I can 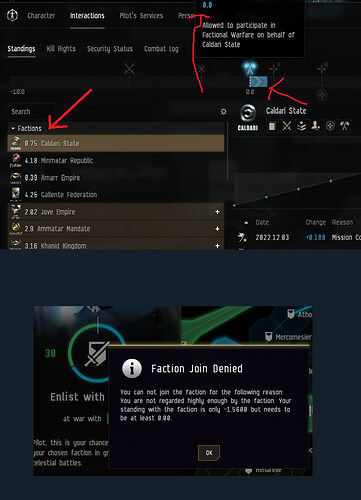 As you can see, I have an effective standings of .75 (factoring in social skills) and the little blue progress bar at the top indicates that I can join.

However, when trying to enlist, it says I can’t (bottom screen). Is this a bug? Confusing UI or something else?

Faction warfare is based on unmodified 0.0 standing

So you would need your base standing over 0.0 to enlist in FW

Ok, but then UI is misleading.

Yeah my thoughts exactly. They need to fix the UI if it’s calculated on base standings. Hope CCP sees this.

Ok, but then UI is misleading. There is UI element that will show you your unmodified standings value also all modifiers

It isn’t. You just aren’t looking in right place. 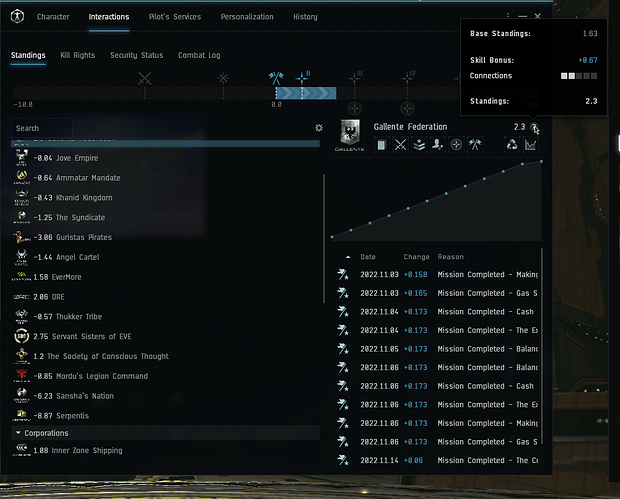 It isn’t. You just aren’t looking in right place.

Yes we are. My screenshot literally shows what the UI is intended to convey; that I can join FW. It literally says that in the first shot of the UI…“allowed to participate in FW”. Literally.

Then report it as a UI bug so it can be addressed.

Besides the UI bug leading to an unpleasant surprise, are you able to plan your path to joining the militia of your choice?

For example, you can join a player corporation immediately to get in the militia (computed based on the whole corporation’s average standings IIRC), but you may already know this.

It seems like a bug. Same thing is for enlisting a corporation or the whole alliance into FW. For some reason having positive standing between alliance and imperial faction is not enough for alliance to join the FW. Also I have an open ticket with the described problem via EVE Support but have no official response yet. So the question is still stands the same: What are the exact requirements for a character/corporation/alliance to join Factional Warfare.

As long as their standings are sufficient enough to not be impacted by his negative standings a week later. Which that weeks time, also gives him time to raise it up enough to not get the corp booted

What are the exact requirements for a character/corporation/alliance to join Factional Warfare.

I mentioned it above for a player. Have base 0.0 unmodified with the main faction ie. Cal State.

For corps, its the average of base standings of all corp members. Any new corp member takes 7 days for their standings to show and affect the corp.

As far as alliance, the executor of the alliance makes the choice to allow corps to join, to which corps retain the decision to join or not. Takes the next DT for corps and alliances to join.

I mentioned it above for a player. Have base 0.0 unmodified with the main faction ie. Cal State.

Even if it should be like what you say, but it doesn’t work that way. My alliance has a positive unmodified standings towards one of the imperial faction and we are not able to join this faction side in FW because it says that the standing is negative. Same thing as Sheriff described. It is most likely the UI bug.

I saw nothing about standings for an alliance to join fw. Maybe its one of the corps causing issues with its rolling average against one of the main 4 empires.

Unless something changed, alliances do not have standings with npcs. Only pilots and corps do.

Well in our case it seems to be that some our claimed systems in Null Sec region don’t allow us to be a part of FW. But it is not officially clarified by GMs or CCP, just personal guess. I will keep investigating the issue.