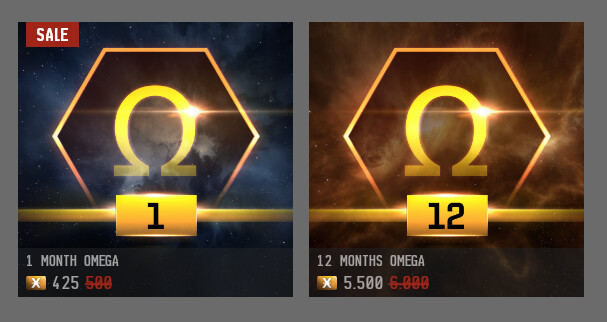 Yeah CCP does this a lot. We’ve added up many of their “deals” in the past 2 years and they’re literally not a deal at all unless you place a high value on skins.

Not being able to tell that a 12-month package should be a better deal than buying 12 1-month packages is standard CCP.

Completely out of touch.

Are you guys touched in the head or just obsessed with hating CCP?

The 12-month offer is a now long-running offer to entice people to spend their PLEX and commit to an entire year. I don’t know if it’s permanent, but it’s quite likely. The 1-month -15% offer is a yearly special thing that only appears for a few days around Christmas and always causes PLEX prices to surge because it’s the absolute best PLEX-for-Omega deal.

I get the feeling you people would complain even if CCP just gave you Omega time for free. You are out of touch.

Considering that CCP uses unethical advertisement since the introduction of the new PLEX numbers I do not think that we are out of touch. The 12 months, 6 months, 1 month, 3 months PLEX packages have never been for sale at their original price, the one that is red and crossed out. Except for these actual promotions, there was never a time when you actually saved 500 PLEX when you bought the 12 months omega time pack because you never had to pay 6000 PLEX ever. Just an example.

I get the feeling that you don’t understand why people dislike CCP and why they throw resentment towards then whenever a legit situation presents itself, because almost all the time when someone hates CCP in recent years it is for legit reasons. The ones who are out of touch are those people who don’t accept that.

I didn’t want my name on that monument anyways

The 12-month package costs a premium because you have to click fewer times to subscribe for a whole year.

Bedamned, how could I have missed that! You’re spot on there. I guess CCP is moving to the “pay-per-click” model, which explains that odd “1 game action per click” they’ve had for a while now.

What, are you saying that an item that is cheaper because of a temporary sale is cheaper than the small discount you get for a package deal all year round?

By the way, how long does this sale last?

News mentions the 24th, so probably gone after DT tomorrow.

Link? Can’t seem to find it. The 3-month deal is going into January so it’s a bit weird that this sale would only last a day.

Why would they only make it last a day? That’s pretty dumb.

*CCP Games not responsible for any carpal tunnel, arthritis, disappointment with the eve franchise, or mild skin rash caused by this offer

Why would they only make it last a day? That’s pretty dumb.

It wasn’t just one day. If it was more visible and lasted any longer you’d probably see PLEX shooting up to 3.5+M followed by a crash due to lowered demand after the special ends. Which you’re still going to see, just not nearly as bad or as fast.

One is a short time sale.
The other is a permanent bulk discount.

At the moment the short time sale works out cheaper.
The rest of the time the permanent discount is cheaper.

I just wish the sale lasted into next week at least.

The three and three is a pretty good deal. Not as good as they pretend it is, but not bad.

I usually buy a couple when it comes around.