From hisec to lowsec? Im sure there are a lot of people trying to build stuff in lowsec like capitals, so i dont doubt it.

I’ve had success with a scythe fleet fit with 420’s, large cap battery/charger mwd, combat prober, and gyro/tracking lows so it’s stable with MWD on. No tank so it’s curtains if you’re caught.

Pop a shot off at one, mwd away immediately, preferrably not in to the asteroids.

if it’s the frigate (and sometimes) cruiser response fleet, keep going on grid with the response fleet in futile chase and combat probe down where the mining fleet warped to. Battleship or missile cruisers that hit to ungodly range, warp off and try again later.

Warp to 100 on the fleet, mwd burn away about 200km per skiff, 100km per retriever, 70km per venture, stop mwd and let response fleet catch up to 100km then warp back to the mining fleet on grid which is sitting there looking pretty Destroy all of them. MWD away again if they get too close. Once the barges are dead and it’s 15 plus minutes later, come back with an orca, miasmos or porpoise for an ore load anywhere from 25k-150k in size depending on which mining ships and if the hauler has anything in it. MTU is advised.

Pretty easy to make back what you would have mined otherwise in the same time frame and you can chain them together and get buckets of ore in a far shorter period of time than if you sat there and mined. I got a 300mil mining mod off of one of the skiffs two weeks ago which was gravy on top.

Best of all, the gankers have to combat probe you to find you.

Pretty easy to make back what you would have mined otherwise in the same time frame and you can chain them together and get buckets of ore in a far shorter period of time than if you sat there and mined. I got a 300mil mining mod off of one of the skiffs two weeks ago which was gravy on top.

Just to be clear, you got the mining mod off an NPC exhumer wreck? Not from the strongbox dropped by the NPC hauler?

Yup, and the 20 mil one has dropped for me once off the normal barge. It happens, but it’s pretty rare.

Nice! I never bothered blapping the mining ships, only the haulers.

CCP does not want people to mine solo.

Then they need their heads checking. Reducing solo play options kills the game, end of story.

Yeah I healthy drop in their abilities in both mining and pve would be nice, I literally have to hunt npc fleets for about 2 hours a day just to leave something for me to mine that day. Also when you do fight them game braking mechanics like this shiit happens… 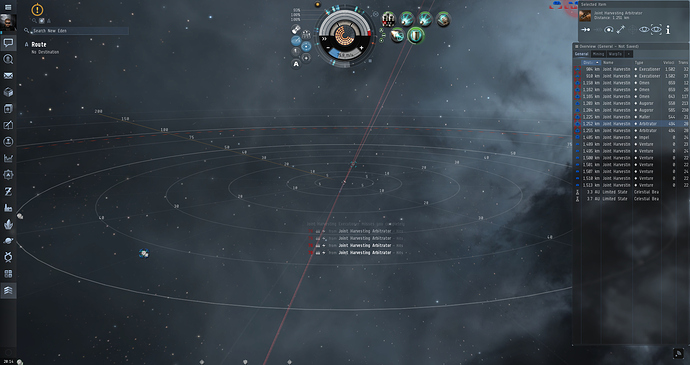 Impossible shots.jpg1920×1017 425 KB
you get hit from 1200KM out from a freakin cruiser. Did you forget there are rules in this game that are supposed to apply to every thing when you made these npc mining fleets.

You don’t have to get rid of them I kinda like the idea just make them at least playable against. I have alpha pilot friends that can’t even start a mining career because these npcs have removed that option for them completely.

I have alpha pilot friends that can’t even start a mining career because these npcs have removed that option for them completely.

Let me re-enable that option:

(1) Create a second character, make it dock up where you mine.
(2) Start mining.
(3) When the evil npc miners appear:
* log in your alt
* undock, fly to belt, shoot the mining ships a little. Shoot not wreck. Warp off once the npc miners warp out. And before the defense fleet arrives.
(4) get back to your main and continue mining. tell the npc defense fleet in lockal that you made babies with their mothers.
(6) Goto (3)

There, it wasn’t that hard, right? He does not even needs skills, even a civilian gattling gun will scare them out. If you are too late, the starter ship gets wrecked and replaced instantly. You have literally NOTHING TO LOOSE. But DO NOT WRECK any of them. It’s easy, just try and understand the mechanics.

This is only showing how CCP makes things that dont even work as they think they would, just are an annoyance to many players.

Or maybe they just wanted to annoy them? That would support my idea that CCP wants miners out of belts in high sec.

This is only showing how CCP makes things that dont even work as they think they would, just are an annoyance to many players.

No, this is showing how I solve any problem with an ALt. The way to win eve online is ALT. Not the key on the keyboard, a second character for EVE.

If the miners would work together a little more it would not be a problem. It’s a trick to either make people work together but us being total sociopaths just clone ourselves.

Making alt is not working together tho. You can make alpha char and log it in few seconds after alpha account.

They can be amusing when unintended interactions take place though…

Shall We Play A Game? Emergent AI Results In All-NPC Fight - INN

“The CDIA Working Group on Emergent Threats has assessed the intercepted tactical communiques from Blood Raider Covenant field commanders, together with the material from Joint Harvesting provided by the Amarr Navy. It seems clear to us that the...

Shortly afterwards some Drifters turned up and both the Amarr Navy and the Blood Raider fleets turned on them; the Drifters called in some reinforcements and a slugfest ensued. Once they dispatched the Drifters the opposing fleets went back to beating the crap out of each other.

This is game playing itself, also Devs playing with a game mechanics for the sake of it. Note it wasnt appreciated at the time it was happening in game, and CCP had to say to us that fact, else it would be unnoticed. This article is about showing off.

Given that NPC vs NPC fights aren’t tracked, it’s the only way we would have heard about it anyway.

CCP didn’t know about it either, the discovery was accidental.

(1) Create a second character, make it dock up where you mine.

Unnecessary complication. If you shoot a miner the defense fleet will come and then miners and fleet wil warp to a safe spot. So if you want them off the belt you just need to align, agro them with drones and GTFO leaving drones. By the time you align back they will be gone (although just in case they bounce back like they sometimes do I’d run a dscan of the belt).

They will not chase you, and they will not attack you again when miners get back to belt. Obvious drawback to this is that you don’t get rid of miners, just scare them off for a short while.

I’ve seen this myself. This was hilarious and awesome at the same time.

I am against further saturation of space with NPCs, I am against it, and also support removal of some of those that serve no other purpose then to make game more tedious, those NPC miners in belts.

It’s ok, you have permission to play the game your way. I just told the OP how I do it. Your way is more awesomesauce. Thank you for sharing.

Which doesn’t solve the issue that they mined the belts out before you even logged in for the day.
The NPC Miners are not the problem, they are simply highlighting the problem, the real problem is that belts are tied to downtime in highsec (& low & WH), not to a respawning timer like Null Anoms. Fewer respawning anoms also concentrates miners making competition & co-operation more likely, as well as less wasted time if you are hunting miners.