CCP to implement a better mechanic for killrights

A better and fairer mechanic

The road to insanity is paved with “Fairness” and good “Intentions” .

let me be clear: we need a third flag status, somewhere between suspect and criminal. it should imply: no docking, no gating, no thether. maybe allow warp so they don’t automatically get killed by CONCORD.

You already wrote that.

Let me be clear, it won’t change anything, but as above, I agree, do it. That at least will let you move on to the next “one more nerf” request, because nothing you propose will make a difference because it isn’t the gankers you need to change - it’s the carebears and they won’t change. They’ll still be self-imposed victims who things are never safe enough for.

you gankers have the ability to warp through high-sec, gate, dock NPC and player stations and also receive tether. you also got a buff to weapons damage and the victims got a nerf to rezistances last ear, during the Surgical Strike update. Don’t think I forgot about that! plis killrights are absolutely useless against a player that has at least -5 sec status. you have everything going for you, while hard-working and honest players have only disadvantages.
i think it is time the playing field was leveled!

Proceeds to autopilot through uedama…

we almost never autopilot. and certainly not through Uedama. most people get ganked during the decloak. and freighters get bumped after they decloak and prepare to jump to the next gate.
so much for the autopiloting myth!

mature MMORPG that EVE could become

no, if your idea of “Maturity” is that eve becomes your little safe-space where you can run around doing what you want without anyone interfering with what you are doing. You you can go back to Habo hotel or something. You want a game where the “icky icky bad People” are locked away".

Originally posted by CCP Wrangler
EVE is a dark and harsh world, you’‘re supposed to feel a bit worried and slightly angry when you log in, you’‘re not supposed to feel like you’‘re logging in to a happy, happy, fluffy, fluffy lala land filled with fun and adventures, that’'s what hello kitty online is for.

yes, continue with this attitude and in a few years you’ll be the only ones that log in. eve’s numbers have been going down for years now.

It wont happen because CCP wont implement your ideas.

i think it is time the playing field was leveled!

Maybe you didn’t read it the first 2 times - I agree with the change. Go ahead and make it CCP.

It’ll change nothing, except result in crybears and white knights asking for the next “one more nerf” because the people in highsec are too afraid of their own shadow to even attack suspects, let alone go chasing after gankers.

It wont happen because CCP wont implement your ideas.

Maybe you didn’t read it the first 2 times - I agree with the change. Go ahead and make it CCP.

It’ll change nothing, except result in crybears and white knights asking for the next “one more nerf” because the people in highsec are too afraid of their own shadow to even attack suspects, let alone go chasing after gankers.

That’s a dumb attitude to have. The more you give, the more that will be demanded. That’s how we got to this point to begin with.

The line between high sec ‘carebear’ and troll can sometimes be thin when it comes to forum posts about ganking, but this character leaves no doubt about their intentions.

This character has made only troll threads in the past and here we have another? Why do people fall for it?

You’d think that, but I’ve experienced the expression of genuine sentiment that’s ten times as batshit as anything expressed in this thread. You can find ideas worse than this on Reddit pretty much every day. How about Steam? Have you been reading the game’s reviews and threads on that platform? 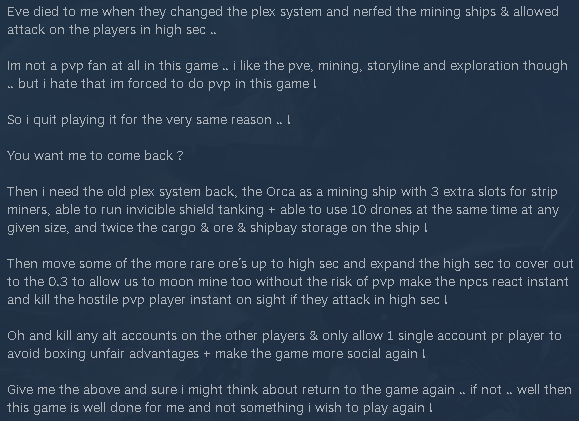 There are dinky online blogs with like 12 readers in which the authors spew frothy-mouthed rage about how CCP “screwed up their own game” by putting the “peeveepees” in it.

I even have internal corp Ventrilo recordings of a dude railing for 3 hours about how he would go to Iceland and murder all the CCP staff if they don’t “fix” the game by “removing the PKing” (rant after a Retriever loss during a war-dec).

Y’all have no idea what kind of public sentiment the game is facing these days. It’s a totally unique phenomenon even in the world of non-consensual PvP games. And this is what CCP sees when they’re doing their market research. They’re sure as ■■■■ not looking at a handful of forum posts from people like us.

Hey when did they add non-consensual PVP to this game?!

Around 2016, apparently. The game used to be “much safer before then” I’ve heard.

introduce a new flag or implement the No docking, No Tether into the Limited Engagement timer that comes from a KR activation.

no docking, no gating, no thether. maybe allow warp so they don’t automatically get killed by CONCORD.

Isn’t that what the weapons timer for?

Highsec carebears are so scared of their own shadow that they don’t even attack suspect baiters, let alone seek retribution against gankers.

True they barely ever dare attack my suspect Atron even when they fly destroyers or higher class ships. Not even a chance to see if they stay on grind while I reship to my PvP ship after they shot me.

you scummy people! twisating my words!

You’re not new to the forum, you should know how it works here. Not one of your words will be taken at face value, let alone seriously enough for an honest conversation. Your thread is useless here, and even unwanted.
Also, you should know: Only trolls speak up about ganking on this forum. And if you were ganked it automatically means you were using Autopilot, there exists no other possible explanation.
Finally, no need to mention declining player numbers, it’s a myth… until the day it isn’t.

Also, you should know: Only trolls speak up about ganking on this forum.

Nah, I’ve seen plenty of posts that speak up about ganking with a serious intention, unlike here.

It’s not the complaints about ganking (or any topic) that define a troll, it’s their intention.

Nah, I’ve seen plenty of posts that speak up about ganking with a serious intention, unlike this troll thread.

Trolls are able to sound serious too, I mean, it’s a possibility to consider. I don’t think “once a troll always a troll” and serious posters can also make trollish posts. It doesn’t have to only be black and white.

It’s not the complaints about ganking (or any topic) that define a troll, it’s their intention.

Doesn’t look like it on this forum. You could’ve fooled me.
Also, second-guessing and assigning intentions to a poster you barely know online or offline sounds pretentious to me, especially when forum rule is to not attack the poster but the ideas.

This idea doesn’t really contribute well to “gameplay” options, just one-off executions. And killrights isn’t a good tool to work with even for that. If they’re cheap, criminals will buy them themselves. If they’re expensive, it’s not worth using them and could be a scam. If they aren’t put up for sale, chances are the person who has them can’t make the kill anyway.

Better to modify a workable bounty payout system for hunting repeat offenders/low sec status. Then you have gankers keeping their gameplay, bounty hunters adding in new gameplay, and the additional gameplay that would be needed for repeat offenders trying to repair their standings.

(An offender bounty system can include, but does not have to be limited to, player-posted bounties.)

It would be a step in the right direction and a sign of a mature MMORPG that EVE could become. CCPlease implement this!

By “mature” you mean, entirely not EVE, i mean if you want to turn this game in to a super shitty version of WoW in space you’re thinking along the right lines, but that would also kill the game entirely

Now, I’m wondering if you’re trolling. because your argument actually supports PIM’s position, and not yours. I mean, you have to realize that… right?

And no, your mechanics will not level the playing field. Ganking is already so heavily balanced in favor of prey that you can reduce your chances of being ganked to damn near zero if you know what you’re doing. The real reason people keep getting ganked is because there’s no shortage of people doing stupid stuff that makes them attractive gank targets.

So, maybe you should probably spend less time advocating for your enemies to be nerfed, and more time figuring out what you can do to get better outcomes. In fact, I’ll provide you resources and answer questions if you actually want to learn.

Or, you know, you can do what most nerf-gankers do, and ignore my offer, or bat it away while calling me condescending. Whatever works for you.

coming from a carebear perspective… no these changes will make it worse, and by it i mean EVE. sure -5 and below can dock etc… but they are also chased by facpo/navy until they do something criminal then concord will intervene (why do i feel like deja vu writing that)