In a cluster so often torn apart by war, prejudice, and dank memes, it is important to remember that there exist, also, cooperative ventures that have bettered the lives of untold billions. To that end, behold, the Arataka Corporate Messaging Competition!

The basic idea is this. There have been some awesome things that happened in the lore that demonstrate that, indeed, this isn’t the Grimdark Future Where There Is Only War, but instead a deep and evolving narrative with constantly-shifting factions, political plays, and unexpected alliances of convenience and mutual benefit. Just so happens we’d like to show them off.

So, where do you come in? Why, with the art, of course!

We’re offering 3500 PLEX for first place, 1500 PLEX for second place, 1000 PLEX for third, and 500 PLEX for each honorable mention. Judging will be done after competition closes at the end of 21st December, and announced shortly thereafter.

Suggested topics: the Intaki-Ishukone system deal, the Caldari Prime DMZ, the Kyonoke Inquest, or more generally the Ishukone Corporation, or the Arataka Research Consortium! More on this will follow after the rules. Of course, if you know of something that you think really needs showing off, please do! Just be warned that there’s a tiny bit of bias toward cooperative ventures involving the Caldari.

Oh, and if you’d like some suggestions for slogans? Here are a few to start off, but whatever you think works, go for it.

As we receive questions, we will probably update this post with clarifications.

Some Possible Themes:
The Intaki-Ishukone System Deal:
In YC111, the Caldari militias had complete control of the Gallente-Caldari warzone. Tibus Heth decided to auction off rights to the Gallente systems. The most heavily-inhabited system, Intaki, needed to be protected from exploitation by less savory types, and so brought in the Ishukone Corporation as a way to protect the Intaki people. After some backroom dealing, the Intaki system is now served by Mordu’s Legion and the Ishukone Corporation in many capacities, preserving the system and demonstrating the power of a collaborative approach to resolving what would otherwise be a crisis.

The Caldari Prime DMZ:
Tibus Heth had preserved the Caldari control of Caldari Prime in the Luminaire system, the heart of the Federation, by threatening to bombard Gallente population centers on Caldari Prime. Indeed, he went so far to attempt to order the Doomsday bombardment of the planet seven times during the Operation Highlander attack, which would have been an extinction-level event. When Heth’s gambit failed (seeing as not everyone was so keen on destroying Caldari Prime, and the admiral in charge ignored his order), fighting continued on the ground. As it turned into a stalemate, the Ishukone Corporation stepped in to offer a deal: joint administration of a demilitarized Caldari Prime, with Mordu’s Legion security presence, and major population centers being under the governance of the appropriate party. To this day, Caldari Prime remains peaceful, and just over half of it remains in the State’s hands. The situation is far more stable than what occurred under Heth’s rule, and Caldari Prime has largely recovered from the tumultuous end of Heth’s regime.

The Kyonoke Inquest:
This one’s more recent! A small group of Templis Dragonaur, an extremist, racist Caldari terrorist group, managed to secure a sample of the Kyonoke Plague, and then things started to go terribly wrong. While we don’t know the full story, it does involve an intelligence agency trying to subvert the plot, weaponization projections, and a secret project operated by Poteque Pharmaceuticals. Despite this, the Inquest itself was a smashing success.

Players collected intelligence, shared it rapidly, and aggressively pursued any lead that turned up. This ultimately resulted in the creation of a treatment, apprehension of one of the intelligence agency personnel, and passage of mandates to begin widespread treatment, release intelligence that might expose other parties that might be involved, while also preserving the sovereignty of governments to handle internal matters as they needed.

This is certainly a story of cooperative work trumping nationalist tendencies, with players of many factions working together!

The Arataka Research Consortium:
Well, we can’t miss a fine opportunity to get some propaganda made, can we?

The Arataka Research Consortium is styled as a multinational scientific group that seeks to cooperatively resolve the mysteries or troubles of our times. We routinely operate fleets in Drifter Hives, we were a major presence at the Kyonoke Inquest, and we’ve done periodic events such as the recent Corrupted Trinary Relic drive, from which we produced some material, and have more to come! We also try to make the world more accessible and engaging with our Discourse production, a Scope-styled in-world news program that we produce on about a monthly basis.

So, if you want to go for brownie points, you can always do something for us.

Filing this away as our second entry so far. :3

Cheers, Nana, for the second entry! Got it marked down.

The colors and the general layout are solid, and you’re the first entrant to try to tackle the Inquest.

As a viewer, my only concern is the layout of the text. Without getting into the content itself, the bit that you intend to read as ‘The Kyonoke Inquest’ reads as ‘Kyonoke The Inquest.’ Might be something to look at. That said, thanks much for the entry!

Oh well… I guess it’s time I post my first entry too:

I know, it’s “simple”, but I hope you like it nonetheless!

A3 size can be uploaded if you need on the end date.

This time inspired by the Caldari Prime DMZ.

That blue/green combo actually works, which is fairly surprising. That’s a hard one to pull off.

I’ll be compiling the existing entries into a gallery and posting a link of that shortly, to all who’ve entered so far. And thanks again for participating!

Just to warn you, just tried to pull the high-res of the second entry, and it wasn’t up.

Also, I did notice a typo. Togheter => Together

I already knew that cause I was warned, I changed the file behind it all but it seemed it didn’t updated and broke the high-res link.

You don’t know how much I hate finding such typos when I stare to the artwork for so long before posting. Sorry.

Its good to put stuff thru autocorrect and print it on paper to read before you make final file for printing.

By the way, the entries so far; most of them can be found in this thread. 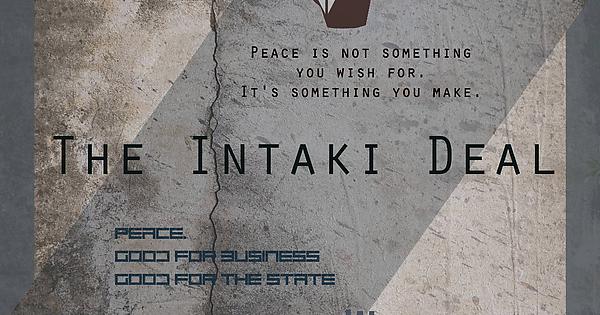 Based on the idea of “building blocks”. Each block bringing something to the “bigger picture” ( I think no typos are in there

Rather entertaining, must say.

That said, two weeks left in the competition, folks! The gallery’s been updated, though now I need to check to see if I grabbed Miyoshi’s typo. :x

Here’s a link to the larger image. Enjoy! Let me know if I need to change anything technical if you want to print it. Also, thanks for putting this competition on! These are always fun!