I bought a $30 drone 2 summers ago. Flew it for a couple of wks before it failed and I returned it. But after yrs of games like Gunship, I flew it effortlessly. I had enough of CCP for a while, so I spent the equivelent of 3 yrs sub for my 3 accts on a Buy DJI Mini 2 - DJI Store, its kit and lessons/test.

This thing flies like a dream. Being a camera drone, it can’t do stunts but that’s not what I bought it for. 30 min flight time. Transmitter has a 6 mile directional wifi range but the drone will only go 3 if you want it back. Which helps signal strength when flying under steel bridges and not lose connection. And no, you’re not supposed to do that or any of the other beyond line of sight stunts I pull. I just don’t fly over anyone for that.

I made this site that should be safe enough to post on the forums. Who knows who might still hold a grudge.

Short demo was a flight I just could not resist. I just had to get it out of my sys. Shows the range and a good idea of what the camera/you (at that point) can see while flying beyond visual line of sight. (BVLOS)

I got ganked by Homeland Security for the other flight!

My drone also signals its location and the transmitters as well if you have the tracking software. Turns out, HS does! Launched from the shops parking lot, brought it back and landed. Cracked a

and we all sat down outside as a lg regional/yearly fair had started that day. Just watching the heavy traffic/people go by. Suddenly, “Agent Smith” appeared outta nowhere, introduced himself and asked if I was the pilot. I said yes. Picked up my beer and placed it on my seat as I stood up so it wouldn’t get warm (on my 2nd 1 by now as he had to fight traffic to get to me

) and got ready to lose my ship. After a 7/8 min argument that even Gix would have been proud of where he accused me of everything he could think of. When he ran outta accusations, he started asking me a bunch of misleading questions, which lucky for me most which I could answer correctly. In the end though, he had me on 1 thing only, flying beyond visual range. So, you could say he popped my ship but not my pod, let me go and paid me for the loss.

After the battle was over and while saying GF to each other, we talked about drones in business, what parts of the course I found difficult, etc. He was a nice guy but I don’t think he ever ran across someone before who wasn’t afraid of him. He looked as astonished as I’m sure I did. I knew exactly what I did and I knew he could do nothing more than report me to the FAA. The FAA being overwhelmed with BS like this would only throw it in the trash.

A Zoomer would have curled up into a little ball and needed a diaper change from someone after that exchange.

I thought those 100’s of hrs playing Gunship would never pay off but it sure did when flying and turns out being relatively good at the game and able to at least survive the forums were good life lessons as well.

A few days later, I got an email from the FAA to join the site for hobbyist, which I did, but now the point is moot now.

Something I am looking at and am even concidering on doing an online TAFE course. 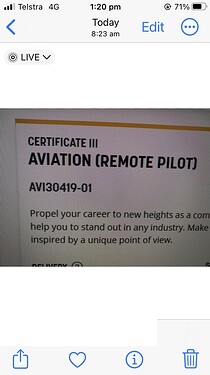 Well this was what I was doing at 8:23am here browsing online TAFE courses
I only own a 3 Channel Single Blade RC Helicopter currenty.

But can you fly it?

From what I’ve read, those are the most difficult to fly. I don’t think I would try it without sim training 1st.

Again, from what I’ve read, you should have an easier time with the test in your country compared to the US. Had to learn a bunch of crap I really didn’t need to. You’ll never pick up chicks or empress your friends with what you learn.

Cost $150 for the course and $175 for the test. Flying is the easy part, getting permission the fly is the hard part. 3 airports around me. Where I work shares a fence line with a lg AFB. No flying there yet. By next Sep, the US will have an active remote ID sys that should allow that. I want to be in on this from the start.

Anyway, best of luck with the course!

When you fly into Morocco, they have some very strict luggage control. Most of the time, they X-Ray 100% of the bags as you enter the country.

They have about eight police officers standing around while they do it. But, the funny thing is that after many trips through that airport I never saw them open a single bag. They were intently looking at all the X-Rays, though.

I wondered for a long time what they were looking for, until I just looked around the airport and realized there were hundreds of signs saying that it was completely illegal to bring any type of drone into the country.

I think those guys meant it.

You should buy a cheap 1 mil Gecko from Jita local and manual control it.

The one I have I would say yes and no, yes being on an empty park on a non windy day it will fly around but very difficult to hover on the spot. it has had a few crashes.

I had always liked RC and it was just the other night on the telly they showed a major supermarket doing a drone delivery trial. It made me want to see what is involved in obtaining a licence for drones. 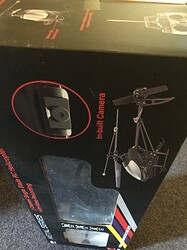 You should buy a cheap 1 mil Gecko from Jita local and manual control it.

You didn’t get the memo?

This drone has a camera setting that targets the nearest human and takes a picture. Not your dog or a deer, human. A nice touch of military software.

it has had a few crashes.

I had always liked RC

I have 3 r/c sets. 1 boat, 1 truck but no flyable fixed wings. I have a tag sale seaplane kit from 40 yrs ago that I never built. 11’ wingspan. I want to see if I can turn it into a survey drone.

For the drone, I bought a tablet for the larger screen. Then I made a cheap cardboard hood to fit over that and remove the glare. That made seeing the screen/instruments a lot easier. Buy a cheap camera drone to practice. Figure out what drone you want in the future whale doing that and then sell the cheap one.

It’s a up and coming field. Anybody who enjoys flight sims will find the testing harder than flying!