I started playing dust516 because it was free to play when i was about 14 i think and i didnt know anything about eve online back then and after servers were closed and few years passed i started playing eve out of nostalgia to dust and im still waiting for a pc version. I dont know all the mechanics that were in dust or problems it had so im sorry if i remember something incorrecly, or just dont know how something used to work. Wth thatn out of the way, here’s my vision:

Goals:
First important thing is who’s gonna play it and interact with it. The idea is that both eve online and this FPS will be impactful on one another.

solo/small group players shouldnt have to interact with the other game, they should be allowed to do what they want to do and not worry about other world.

medium groups should have some loose connection to second game where for example EVE organization could hire a FPS organization to do their dirty work. At the same time there wont be a reason to form medium PvP groups except for larger coordinated engagements and to find those you need to have contacts within eve.

For large alliances it will be esential to have its own army, generals, etc to coordinate ground assaults with space battles and win objectives together and also because eve alliance will have to supply fps alliance

Just FPS perspective:
For small/medium groups we will have Fraction Warfare with LP for victories much like in EVE and LP store, this will be also a form of quick play and you will be able to choose a size of a match to play
the biggest size would be 100v100 with multiple outposts and mixed arms much like planetside maps

Industry/Market:
Industry will be purely on EVE side and you will be able to sell your goods to FPS side via trade hubs.
both games will have isk and plex an will be able to trade between each other. Loses in FPS would have to be meaningful from eve perspective

SP/skills/gameplay
Game will be free to play but with premium accound granting x2 SP and unlocking skills
f2p skills would be T1 infantry + light vehicles like cars
premium would get also T2 gears and tanks and gunships
SP would be generated only via playing (not passive), so the better you would perform the more SP
You could extract SP and sell it but you couldnt make a farm without illegal bots.
T1 armors would be jack of all trades, while T2 would be more specialized and expensive. There would be 4 categories with T2 options:
light
-T2 jetpacts
-T2 invisibility
medium
heavy
-T2 activated abillity for better resistances/better regen
logistic/battlemedic
T1 would work more like a battlemedic with some support while T2 would rely on others to protect him
-T2 engineer for supporting vehicles and setting defensive shields and turrets
-T2 medic for more healing and pushing+reviving
All races would have its own set and there would be pirate sets

Vehicles:
pretty much exacly what dust had+ a bigger tank and some ground and air transport that would be able to carry a lot of infantry much like in planetside
EVE+FPS
Fraction warfare:
i dont have a good idea for interaction between those two. Ofcourse bombardment would be a thing and i guess victory on the ground would push system capture.

NULL:
now here we first need to go back to the concept of different sizes. We dont want to force small groups to logistics of groud fights, looking for someone that will fight for you, etc. That means that the system has to determin somehow which size is it.
First, there wont be command centers to drop(idk how that worked before) instead when the TCU is reinforced there will be timer for planetary assaults, so eve has to engage first and has to commit somehow.
Second, the amount of people for each side will be determined by the amount of planetary industry done within the last 30 days. In other words, the moment when TCU is reinforced, where will be a timer
for all planets, map sizes will be generated for specific amount of players, and if the gibbest map is not enough, then where will be multiple maps on one planet. in case planetary industry is too small, then there will be no content generated for FPS game.
Third: planets will generate NPC fighters durring station timers, bigger maps and more maps mean more squadrons to eigher defend your stations or attack enemy stations. (let me know if you have a better idea)
i dont know how many fighters, how much planetary industry for what size of a map, etc. this would require a lot of looking at statistics.

I would love to see tanks and gunships in the massive engagements on the massive scale. and for those who dont know what i ment by planetside maps: 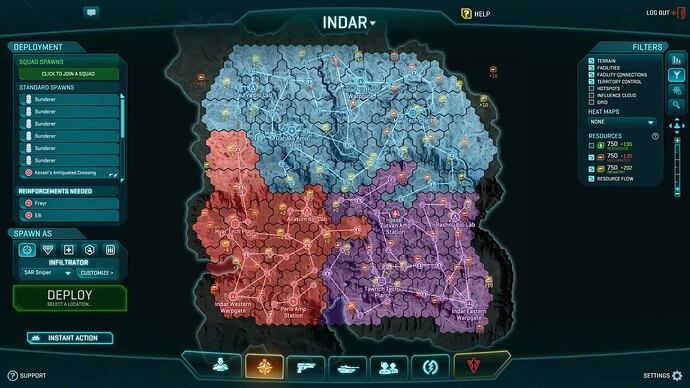 image1920×1080 236 KB
multiple facilities, with capture points, only infantry can capture those points and between them multiple transports and tank collums with air support. You can only capture facility connected to facility that you already captured and is not flipping. Thats it

If you played dust516 could you tell me what impact it had on eve and how their relation used to work?

or problems it had

CCP can’t split their focus. It never ends well for any of their products in the long run.

EVE is ships in space. Period. All you would be doing is splitting the dwindling player base…

CCP isn’t splitting their focus, another team under CCP is working on a not titled FPS game. I think its CCP London that is actually working on it

We have a history of breaking down barriers with our ambition. I think that’s very much true in this game. It is a hugely ambitious game, it will be genre-defining. And it has all the hallmarks of a CCP game. When I had the opportunity to meet the team, play the game, and I was blown away by what the team has been able to create.

We’re about 40 people right now. The final size really will be dependent on the scale of the game that we’re making. I’m confident and I have a remit to build the studio to support the game.

This in-development title already has a ‘Player Council’, as some of the most hardcore EVE fans have already been involved in the iterative process, according to Blunt.

They’re helping us to gauge ideas and bounce things off as we go through the early stages of development.

We took our shooter game concept back into incubation where it could continue to evolve. Doing so was the best way to ensure we create a memorable experience that satisfies our players and makes us proud as developers. Due to significant changes in its scope and direction, it also made sense to update how we refer to this project internally. Consequently, we are no longer using Project Nova as its codename.

Furthermore, we are moving away from publicly announcing our internal project codenames and will wait until we’re ready for a full reveal.
We remain committed to offering a rocksolid, action-oriented gameplay experience with stellar visuals. We want to show you rather than tell you how we have evolved this concept and we’re looking forward to doing so when the time comes to reveal the game.

CCP isn’t splitting their focus, another team under CCP is working on a not titled FPS game. I think its CCP London that is actually working on it

their resources and focus is split. or did you forget the original dust, that failed mmo and WiS were all also separate teams.

Furthermore, we are moving away from publicly announcing our internal project codenames and will wait until we’re ready for a full reveal

the team in iceland is doing EVE online… a whole 'nother team, not associated with EVE online, is working on this new MMO. WiS was this same team, its where they bought another company and wanted to introduce parts from that game genre to EVE, which failed.

CCP is headquartered in Reykjavík, Iceland, which serves as the home of the EVE Online development team. In addition to our headquarters on top of the world, we also have development studios in London and Shanghai working on additional projects and supporting our existing titles in those regions.

soooo still nothing really to show for any of it.