When i talked to Rise about it I offered alternatives for the logi drone bonus to something else. Like warp scramble strength (similar to maulus navy) or plate mass bonus like the Eris. As i wasn’t really sold on the bonus myself (even the comments in that thread show that I wasn’t fully sold on it).

The CSM in a nutshell. You propose changes, you provide good reasons for the changes, CCP agrees to make changes, they do half of what you suggested and then do something else for the other half, people hate the other half and then complain that it’s your fault bad changes were made you because you asked for changes in the first place.

Sometimes it would be nice if CCP listened a little more.

The CSM in a nutshell. You propose changes, you provide good reasons for the changes, CCP agrees to make changes, they do half of what you suggested and then do something else for the other half, people hate the other half and then complain that it’s your fault bad changes were made you because you asked for changes in the first place.

Poor baby… D’ya need a tissue or a shoulder to cry on?

Poor baby… D’ya need a tissue or a shoulder to cry on?

Oh, and I forgot to mention, you get guys like this who follow you around, get banned for talking ■■■■, and then make alts to keep doing it again, for God knows what reason. All because you had the audacity to run for CSM and actually talk to folks in the community. The guys who never post here don’t have to worry about these guys, which is largely why there’s like three of us who actually post on these forums.

Yeah, i’ve already experienced that a bit with the plate/extender role bonus.

“Your changes made marauders even stronger”

Well, my changes never included T2 battleships in the first place. That was a CCP addition. Though, its easy enough to point back to the original post to show them i never wanted those changes. Probably harder for CSM since they don’t really have a visible paper trail.

It should not matter where the person on the CSM lives in EVE. What matters is that they take input from anybody no matter where they choose to reside. Understand that impact in its entirety and see what can be done.

You say it yourself, “Understand that impact in its entirety”. For example, as much as Brisc does a good job of reaching out to parties in the wormhole community to advocate for them and try to prevent them being negatively impacted by changes, he’s not got the same degree of personal experience that many of the candidates who live in wormholes do. In the closed-door CSM meetings, he won’t be able to bring the same level of nuanced insight to help guide CCP in that area. Even going off and consulting with an expert isn’t the same as having all that knowledge at one’s fingertips.

It’s not his fault he’s not some kind of omniscient perfect being, but it does pose a wider issue when most of the CSM are engaged in similar playstyles. It can’t help but introduce unintended bias.

This is why candidates from different parts of space, or at least different playstyles to the large nullblocs are important.

The hard part of getting non block players to organize synced voting ballots that would support each others is hard as the playground is so split up. During last elections there was some talks amongst the independent and non block candidates to form comms channels but things never took wind under the wings.

I did my rounds last year when i decided not to run and instead spend tons of time studying the candidates which i could not do when i ran myself. I also talked with some larger and some smaller independent candidates and communities and the message usually was that if they did not had an own candidate running the leadership didn’t care about CSM and those who did care didn’t either care to make even a ballot of their own. It felt like most of them had given up on CMS and let it be a null thing.

Anyway there are ofc also interest in voting on CSM amongst these communities which brings us the next problem: getting their members to vote on some players that is not affiliated with the said members directly. We looked at the voting numbers from our own community of around 3k ish active players and when i ran myself we i think we pushed around 1,4k votes but last year when our ballot had external players only we pushed few hundred votes on mike and fellows. Granted Mike got in with those so op success but the numbers clearly indicated to us that CSM for a lot of players looks like a dick waving contest (at least on the HS side).

And lastly finding information and voting for the candidates takes so much effort and time that most players simply cant be arsed to take the time to do the research. Those who want to support their own corp/community or whatever often follow the corp ballots. Like suggested over and over again getting voting also into the ingame client + added some rewards for voting such as an “i voted skin” or similar could add a lot more random votes besides the premade ballots to the table.

added some rewards for voting such as an “i voted skin”

How about a MEGA hat? Make Eve Great Again? 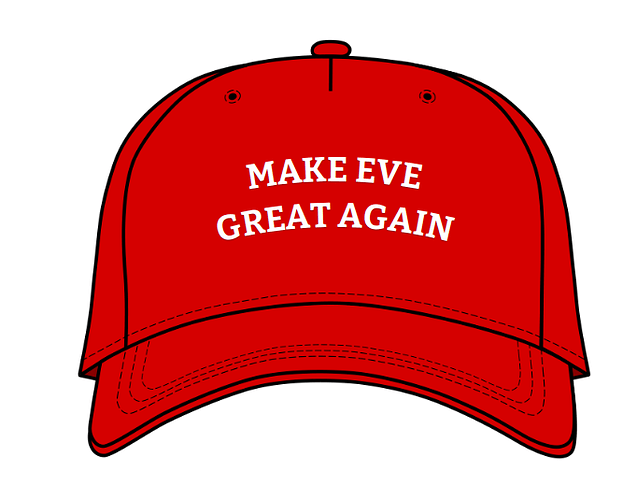 You have a wh candidate on csm. @Arsia_Elkin

So who’s going to count the absentee ballots?
This election is an electronic vote, right? Plenty of room for abuse there.
Will there be debates between the candidates?
Is there a pre-vote?

Null bloc gameplay is about loyalty, a sense of belonging to a team, and deriving meaning from the organization one belongs to. Add the established communication and player mobilization means, plus ballot trading, plus the fact that only a small portion of all players actually vote; null ends up with an unsurmountable advantage when it comes to influencing voting behavior.

You can be a renowned wormholer or a lowsec pirate but you’ll never have a similar influence on wormholers or lowseccers (or any such group you’re trying to get votes from).

Every year someone attempts to mobilize the non-bloc players (i did it for 2 years) . That never works. Do an extraordinary campaign and you can get elected, but that’s a lot of effort thus such campaigns are rare.

CCP can address the overrepresentation by adding specialized seats. Some bloc CSMs will argue all such systems are gameable, but they lack imagination. The issue is, such systems require some allocated devtime that I feel CCP doesn’t deem worth.

Perhaps CCPs reluctance is with good reason. I’ve seen null CSMs doing a very good job representing different playstyles. But I’ve also seen utter wastes of a CSM seat occupying it for years. Bloc CSMs typically unite in conservatism when it comes to nerfs to their playstyle to benefit other playstyles, which is the actual issue with the overrepresentation of nullsec. Meanwhile, some teams at CCP are good at filtering out that conservatism. Even if they revamp the elections, drama would likely occur both at the CSM and the wider null community levels, meaning further CCP reluctance. So CCP can possibly think they are at a good spot when it comes to cost/benefit of the entire CSM venture.

You can get elected as a non-null CSM, beat all that conservatism, and still end up watching some of your preciously suggested features ending up in the game but in a very weird fashion, realizing only a small portion of their true potential. You can fight the null overrepresentation CSM, but you can’t fight CCPs inner workings.

If one word summerized the entire situation with CSM that would be “Kafkaesque”.

So who’s going to count the absentee ballots?
This election is an electronic vote, right? Plenty of room for abuse there.

While the chart you posted looks like high sec can leverage a much larger portion of the playerbase than null , perhaps the actual picture is not so ‘rosy’

If you subtract from high sec and add to null sec

Then your percentage leverage is drastically reduced I would think

High sec blocs with some affiliation with null sec alliances

Just because an affiliation exists does not mean null’s voting interests will be followed. High sec arms of null blocs have at least in part there own interests. Not all of those players are alts or whatever as No.1 in your list. Many are players with their own concerns with no interest in moving to null. I don’t see how you can exclude them as “high sec’ players for the purposes of narrowing the lines on the graph.

Random newbros who dont know/care what CSM is , obviously not to be added to null percentile either

Just because someone is unaware they are being “represented” doesn’t mean they arnt represented. And isn’t this kind of the point of the thread? That the general apathy and lack of awareness is addressed. Letting these players know they do have a voice and can support someone who will represent their gameplay on CSM.

It’s somewhat cynical to suggest players don’t exist or that they don’t count if they arnt actively engaged.

It’s somewhat cynical to suggest players don’t exist or that they don’t count if they arnt actively engaged.

I was simply refering to votes , not wether they are represented or matter , if they arent engaged , as you put it , they wont vote

Literally a copy-paste of her campaign thread a year ago

I’ve decided to run for CSM16 this year!
My platform will be mainly focused on the following topics:

She’s a good candidate but it’s disingenous to suggest she’s there to represent wormholes.