Eve's War Dec Groups and who are they

Sounds like something someone who’s losing at PvP to superior players would say!

Several people mentioned this post to me so I had to have a look and wow this delivers real lies and some salt too.

Anyone who knows me is aware that I base entirely out of NPC stations, and have zero interest in player owned stations. I’ve been quite clear that I will not finance them, defend them, or use them.

You may not defend them, we noticed that, or own them with your alliance, but you certainly use them. You tether to them and you re-ship in them as well. You do use them, and to pretend otherwise is the level of denial I have come to expect from you.

Funny though and with that I am going back to ignoring your nastiness.

It is very much worth going after the structures used by Gankers with wars. We did it and removed gate tethering locations on key gates.

Dracvlad is a very proficient ganker-owned station destroyer. His skill at destroying structures belonging to players who can’t stay on the field longer than the 5-15 seconds it takes for NPC forces to destroy them knows no bounds!

I used the word we? As in the alliance I am in, Destiny reads that as Dracvlad, very funny.

you certainly use them. You tether to them and you re-ship in them as well.

Not really, I don’t.

This just shows that the ‘expert’ Dracvlad doesn’t know what he’s talking about. Anyone who fleets with me and gets in comms, trades ships and discusses tactics, they know that I prefer NPC structures. I actually make fun of structure owners. Even the antigankers who ‘hunt’ me are aware of this – but you are not one of those people.

You are not even a relevant antiganker. You don’t log in, undock, or do anything. You just blather on, ignorant and misinformed. You derive your sense of relevance from the fact that someone else (not you) managed to kill some random structures (a long time ago). That’s great, but it doesn’t make you relevant. I’ve killed barges that are more valuable than some of the structures you linked.

I warp from moon to moon, and gate to gate. So you can kill every structure, and I will continue doing what I do. If you kill a structure, you will not even inconvenience me. I probably won’t even notice. Other people use structures, of course. However, those people are not me. I use NPC stations, and that’s a verifiable fact.

Yes, you do, lying again, tut tut, I have watched you tethered many times on the Fortizar in Uedama. Though I will say that you move around more than most, and it may be that you did that as part of a ganking fleet that was after freighters. Your normal mode of operation is as you said, but you just cannot be truthful on anything can you. You have used them, period…

I will say that you move around more than most

Your normal mode of operation is as you said

It sounds like ol Dracvlad knows Aiko is not an ordinary tether monkey.

Heh, gwanker got rekt by superior logic and deduction skills…

I can confirm that when I flew in Aiko’s fleets, we used NPC stations.

Anyone who fleets with me and gets in comms, trades ships and discusses tactics, they know that I prefer NPC structures. I actually make fun of structure owners.

I don’t anti-gank Safety ( I simply can’t be bothered, and they generally leave me alone anyway ), but I do regularly provide intel on where they are and have done so ever since Cilla was my main. Not that all the intel seems to make much difference… 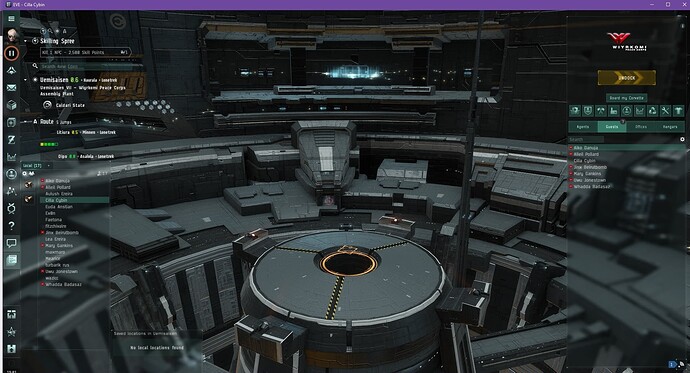 That was already tried. We had glorious fights with 700 people in local at the biggest of the fights.

But things go through cycles in EVE. People move on and other group grow and take control and it keeps on cycling around. Nothing in EVE is certain, I could loose everything I got tomorrow but I know I will be ok and move on to the next challenge.

This is the only truth of Eve.

Also, respect Kane that was pretty thoughtful and reflective.

So when a war dec group loses their war hq do all the wars drop , did Riot lose a war hq the other night out of interest.

Things seem quit hot around jita a fleet facing off Black flag and BF responding with a very large fleet the next evening.
Alway good to see and spotted some Jita holdings around again which is nice , from a people returning point of view

Correct and RIOT did loose their WarHQ. I am surprised they did not defend against that fleet. (NVM, bloody nados and some randoms…)

And yes, yesterday we had a 100 man fleet go to a specific system and clear out structures of a groups that allied against us last year. We were pleasantly surprised to see they expanded their corp and assets recently and though it would be good to say hello.

All the wars drop and they have a cool down period where they cannot war dec those entities again for two weeks. Just looking at that Astrahus loss, I always like seeing war HQ’s going down, and that it was RIOT’s was icing on the cake.

I will have a look at that Blackflag fight in a minute, I like keeping tabs on hisec wars, mostly because there are some pretty rampant ego’s in play and a lot of interesting skulduggery. AKA Destiny and RIOT in this thread for example.

People’s obsession with things that terrify them is a common psychological phenomenon.

Did you see your old friends at The SRS lost a structure and i think it was their war hq . Although i cant be certain but a war dropped , they may have been allied to Riot who did lose an hq

We (SRS) did not lose a structure over the weekend. (Its been a few weeks since last lost one, price of business when we do lose em though).

It still beats me how R I O T can continue to call themselves a merc corp when it seems pretty much that anyone in eve can own them. Looks like someone is already hitting their new war hq, and right now their shedding blood to phoenix naval. An alliance who can’t save their own war hq even after hiring low sec pirates to help.