Today we have a new feature, Fitting Warnings, on Singularity and we would like to ask for your help testing it!
The idea with this new feature is to help new and old players improve their fitting skills and help them avoid common pitfalls.
The Fitting Warnings feature analyzes the fitting of your ships and warns you when your fit is off in some way and give you hints on how to fix the issues. The combinations of modules and ships in EVE are near endless, so we’d love to get more eyes on it, have you guys test out your fits and tell us how it’s working or not working for you.

There are 4 new icons in the Fitting window, each of them is only displayed if any of the rules in the corresponding category are broken.

Each of the icons has a counter of how many of its rules are broken and a tooltip that lists what they are and gives you hint on how you can fix the issue. The problematic modules are also listed, and mousing over them will highlight them in the fitting window. 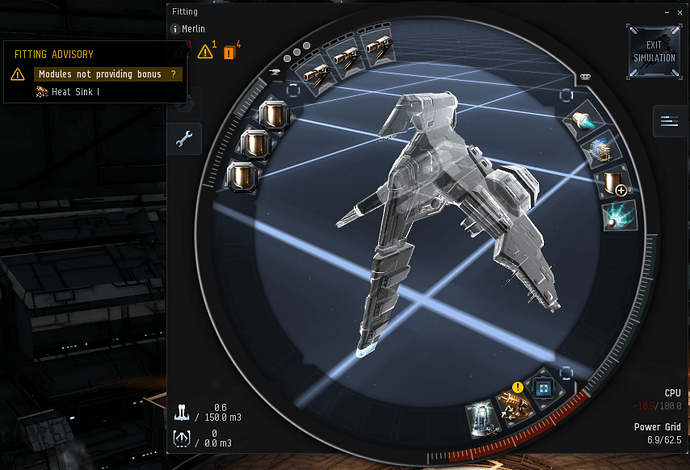 With this change, we have removed the “Skill mode” in Fitting Simulation. We felt that was a bit of a hidden feature, and instead we have added a new warning icon for the missing skills, and if it’s not visible, you have all the skills needed for the fit. When mousing over the skill warning, the modules for which you are lacking skills are highlighted in the Fitting window
With the skill icon gone from simulation mode, we have moved the “Copy All Skills” feature to be under the “Import/Export” functionality in the lower left corner of the Fitting window.

We’d love to hear feedback from you on this. What is working, what is not working, what other warnings would you like to see, do you feel some rule should belong to a different category, are there some obvious issues, suggestions on what the hint text could say, whatever you want to tell us about the feature

(the tooltip text is nowhere near to being final

(a ship categorized as …)

Suggestion: Maybe consider adding a Yellow Warning when a weapon system is fitted but no appropriate ammo is found in the cargo or loaded into the weapon?

As someone that hits the CPU limit (or the Power limit) alot, the first thing I want to know is which modules are the largest consumers of the overloaded resource. It would be nice if the top 3 or 5 (i.e. a short list not everything) could be listed under the Red Warning Icon.

Currently the only two ways that work are importing the fit into PyFA, which displays the info and I see the resolution fast, or guessing what modules might be shuffled - getting Info and checking the Fitting tab - not exactly user friendly…

Currently the only two ways that work are importing the fit into PyFA, which displays the info and I see the resolution fast, or guessing what modules might be shuffled - getting Info and checking the Fitting tab - not exactly user friendly…

Did you know if you mouse over the modules in the fitting window, it will show on the CPU bar how much of the CPU they are taking?

I would add to this any charges for fitted modules i.e. nanite paste, cap boosters, scripts…not in the cargo bay.

Dear CCP… how about finaly… in the second decade of eve online… finaly… give us different Icons for the 3 Types of DMG Mods… just put a little Ammo Type Icon on it?
and even the Mining Laser Upgraders and Ice Harvesting Modules looks the same… little rock and icecube on it maybee?.. would also take a special snowflake^^
also not to mention the resistance Modules and Rigs… or Missile DMG Types

Since CCP Rise mentioned it in Talking in Stations i dont expect the Module Tiericide to be finaly done or balanced bevor Eve switch to Aether War^^
the confusing naming of modules after the old and new system and even that loot of blasters and stuff isnt helping new players
but that module icons? hey thats grafix stuff \o/ would be mostly an Art Team thing… doing “real” Dev work to make the game better for everyone

other warnigs or better stuff for new players?
new players allways get confused about whats cap whats grid whats the skills for more of them or more cpu… (i constantly posting the old darkblad shildwall stuff informations because there are not an ingame information about it (evelopedia hust)
but thats nothing easy to do in tooltips i guess. or would be… but have to be an opt out option in the fitting window for old players

also in this thinking: the whole career missions are allways a big struggle for new players, mostly exploration and industry (and the missions where the ships get lost)
(hey as i rant a little bit today… long time not seeing any x-ray pictures from ccp ghost… same as the NPE 2.0 2.1 3.0…)

I feel a lot of these warrant a Red tag rather than a yellow, especially dual ( or even triple ) tanking and mixed turret sizes

What if when you open a fitting it showed you all of your ships cargo holds and correctly reflected what was actually in the fit rather than some kind of best guess system?

no appropriate ammo is found in the cargo or loaded into the weapon?

“Not Loaded” || “No reloads available”

I feel a lot of these warrant a Red tag rather than a yellow, especially dual ( or even triple ) tanking and mixed turret sizes

It’s important to have a distinction between “not usable” and “not advisable”. Of the proposed “yellow to red” list, I would only suggest moving “Modules not providing bonus” to the Red category. While you can undock in this state, you put an item in that slot, intending something would be there, but the choice was very wrong.

In PvP, dual tanking can be a valid choice for a “bait” ship with no weapons.

Hull Tanking (edit: with hull repair modules) could be flagged for the purpose of advice only, in White, as “not efficient compared to armor or shield” (but not “invalid” because the fit may be intended for the temporary purpose of repairing some hull damage.)

‘Invalid Modules Fitted’ makes sense as a Red tag because that would actually result in the ship being in an un-flyable state and force things to get stripped off. The rest of those can stick to Yellow because while they may be some degree of very bad idea they’re not inherently illegal.

Suggestion: Perhaps for when fitted drones have insufficient skills, like when downgraded from Omega to Alpha, the drone bay shows up as red, not just in simulation mode, but also in normal fitting window.

Currently when you board a ship as Alpha and you have insufficient skills for large T2 turrets, for example, the turrets are greyed out in the normal fitting window. Something like that should happen with the drone bay for when you have drones that you cannot currently launch.

Did you know if you mouse over the modules in the fitting window, it will show on the CPU bar how much of the CPU they are taking?

This lets you see the impact of individual modules, yes, but it doesn’t give a good impression of the relative impacts of the different modules.

Idea: Hovering over the CPU/PWG bar itself shows some form of visual indicator on all fitted modules of how much they are contributing to the total. (Color gradient, bars, even just hard numbers on the icons maybe.) So you can do what Far Farer was talking about, and in one move compare the resource drains of all modules in the fit, together, rather than needing to check them all individually to find the worst offenders

What about ships like the Myrmidon which don’t have a turret bonus but 5 turret slots you can put any gun on.
Would it be “wrong” to put artilleries or autocannons or lasors with a heat sink on the Myrmidon?

And since you are working on it, may I make a plea for adding a “delete all” button to the fitting browser please?
The wrists of many people will thank you in advance!

Would it be “wrong” to put artilleries or autocannons or lasors with a heat sink on the Myrmidon?

No warning since any weapon works on a ship with no bonus to type; but, we should see a warning for mismatched “module provides no bonus” - heatsink with autocannon fitted.

Separately, I would like to invoke Feature Creep: A button on the fitting window next to each slot category; “unfit all: high / mid / low.” Use case: changing fitted short range weapons to long range. Note this can be achieved by applying a previously saved fit, but fitting does not support pulling items from designated ‘use for fitting’ containers.

This is a good change.

An addition - perhaps some kind of indicator that the ship is providing a bonus to a module?

e.g. when fitting medium energy turret to an Omen gives a little tick, but not if fitted to a Stabber.

You could be more aggressive and have a negative indicator (rather than positive) that e.g. lights up if you fit the wrong type of gun to a ship, if the ship has a bonus for another type.

The same thing could be done for other modules e.g. shield modules for Gila etc etc, EWAR modules on the right ship etc etc.

This might help people fit the right modules on the right ship, especially as a beginner.

Bonus points: have a button in the simulator that is ‘show me only modules that the ship (is neutral for or) gives a bonus for’.

Aw. No!!! There will be fewer “HA HEY LOOK WHAT I JUST KILLED” in comms all over New Eden.