This is my first attempt at putting together a Rapier webber to help a freighter , the scan rez is 998, Web range 56km, EHP 40k using pyfa.

I know there is a formula but it is beyond my little brain so I ask:

I used to fly heavily for PushX and I webbed my freighters 100% of the time. Both for safety and speed.

I used a Huginn, but I believe both are similar enough. Covert doesn’t really matter.

You should only need 2 webs.

I honestly never bothered with scan res or really even tank. The scan res may help, but the time it takes to lock is still plenty fast.

I did put a MWD on, as even with a 56km web range there are some gates that you can still end up out of range.

I’ve made many billions hauling. Never had even a close call on either the freighter or webber.

Your fit will work OP. No need to complicate it… just make sure you practice it and figure out how to do it well to minimize opportunity for your Webber to get suicide jammed.

Personally, I used a Hyena for webs and also 3 webs. I have had a few instances where 2 webs would not cut it. I was triple expanded in one instance and 2 webs just didn’t web me into warp. Overall it was an extremely rare occasion but to be sure I always tried to apply 3 webs.

Yes, it will work fine. It’s slimilar to the fit I use and while 3 webs isn’t generally needed, the whole purpose of the fit is to web, so I generally always run 3 also.

For the scan res, it’ll be fine: 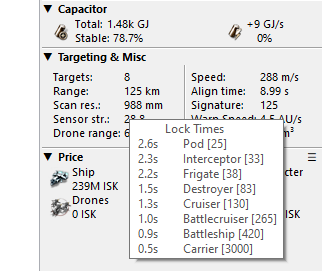 If you are new to webbing a freighter:

If over 56km, then heat the webs and range will be almost 73km.

Running a sensor booster with an ECCM script is something I do. IMO the biggest risk to the freighter webbing strategy is either your Webber being ganked or suicide jammed.

Taking precautions such as having perches on gates for your Webber to warp to in order to wait out a criminal timer is a bit extra… but if you find yourself hauling something worth enough for someone to go through the effort to kill or jam your Webber, all the effort on your side is worth it.

I am hoping to lock under 2 seconds for insta lock to have a chance incase something tries to insta lock and warp distrupt the freighter, have heard that 2 webs will work most of the time but there is a possibiity 2 might fail. 56km web range not being enough is worrying.

56km web range not being enough is worrying.

Only on regional gates. So it’s fine almost always, but on regionals there’s a chance it will be not enough.

Heat the webs in that case, and if that isn’t enough, hold cloak with the freighter and MWD towards it as best you can pin point it from the freighter overview looking at the webber.

It’s a good argument to drop a sebo and add an mwd or ab.

Rather than a separate overview tab, would watch list work?

Rather than a separate overview tab, would watch list work?

You have to Ctrl+Click in the watchlist.

If you have modules active on your webber, you just click on the freighter in overview.

Keeping it simple minimises the number of things that can go wrong.

Mauler, 3 webs, tank in the low. Once it takes gate, warp to closest celestial, align back. Once the freighter enters system, warp back to the freighter (using WL), switch to “fleet” overview, preload webs, once the freighter appears on overview click it (or just spam click the overview)

I didn’t realize that pyfa showed lock times. The rapier only needs 1 sensor booster with scan res script to insta lock anything Battleship or above in under 2 seconds

Due to the feedback I discovered that I could use pyfa to give me locktimes, I also needed a mwd and protection from jamming.

The following fit I think satisfies all of the above having sensor strength of 76.9, a mwd and a sub 2 second locktime of 1.2 seconds on a carrier with an EHP of 35K. The cloak is just incase.

I also needed a mwd and protection from jamming.

you don’t.
Once you are used to it, you are on grid the moment the freighter decloaks and you web it at once.

also you don’t need fed webs. Instead you should use mutated webs with 60+ strength, because with good enough lock time (<0.5s) the freighter only has 1s of acceleration.
A vigilant would be better(a single web is like 4 stacked 60% webs) but too expensive, a DD could be alphad when warping out after taking gate, making your freighter an easy kill.

Won’t the vigilant having no web distance bonus take time to get to the freighter being susceptible to jamming and leaving the freighter vulnerable as it waits?

That’s what I do.

Mauler, 3 webs, tank in the low. Once it takes gate, warp to closest celestial, align back. Once the freighter enters system, warp back to the freighter (using WL), switch to “fleet” overview, preload webs, once the freighter appears on overview click it (or just spam click the overview)

Overly complicated and takes too long IMO. In many cases due to the weapons timer, the webber and freighter end up jumping the gate at almost the same time. I used to use a frigate (cruor) and it was way faster to let the freighter hold cloak while you quickly MWD into range.

and protection from jamming.

so now, what do you need to make your freighter warp with webs ?

So first we assume you have preloaded webs, 0ms ping, 0ms reaction, so that when the freighter aligns you target it at once and 1s later it goes to warp.
Actually the requirement is to have ping×2+reaction+lockdelay<1000 ms.

So then what happens is that your freighter gets webbed after 1s, and can go to warp after 2s.
Note that someone else can point it . Your freighter CANT go in warp before 2s, which is ample for anyone with the same lock speed as you to point it.
Since the freighter is basically webbed after actually ping×2+1s , its acceleration after this is very small.
The requirement to get into warp is to reach a relative velocity of 75%, so Vr=0.75. A web multiplies the maximum speed by wm (eg 0.4 for a -60% unstacked web) so you actually need to reach 0.75×wm .

Since you actually don’t web at t=1 but at at=1+ping×2 this can increase a little bit .

In many cases due to the weapons timer, the webber and freighter end up jumping the gate at almost the same time.

That’s why I had pings on the gate.
Now maybe the warp speed increase messed up that a bit, but I had no issue doing so. The 1min timer is plenty enough to make your alt warp to the freighter.

I can see why they call EVE spreadsheets in space.
It makes my head hurt just looking at it but will help I think if something goes wrong.

Won’t the vigilant having no web distance bonus take time to get to the freighter being susceptible to jamming and leaving the freighter vulnerable as it waits?

no, you WARP TO the freighter once it enters local. Even if the freighter is still cloaked, you can warp to it and you will land 2500m around it