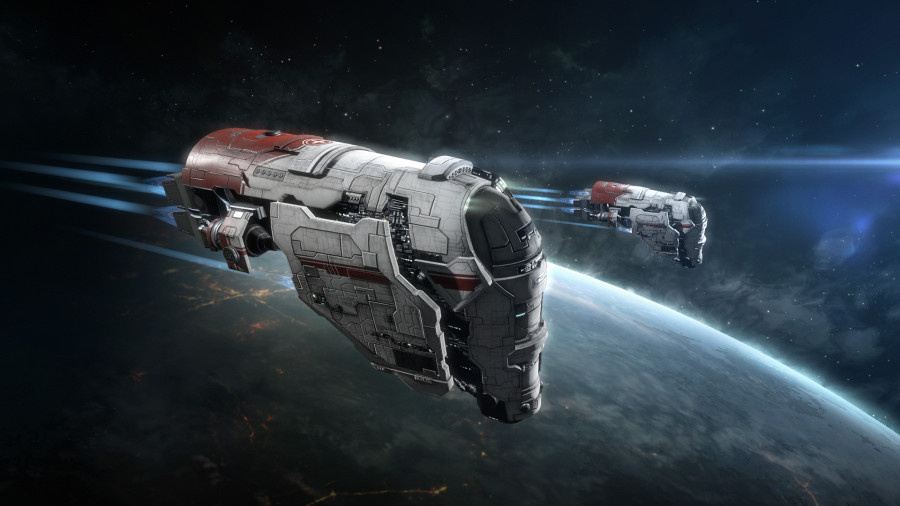 Have you ever felt like your favourite item in EVE deserves a more fitting description?

Maybe a little more panache? Perhaps a spot of humour, or maybe a touch of edginess to it?

Fear not, glorious capsuleers, for you can now have the chance to make things right!

This is the place where you’ll be able to submit your own ideas to the GM Week Item Description Contest!

For full details of the contest and the rules, read this devblog!

Also, please be aware that any posts that are not submissions for the contest will be removed from this thread!

Networked Sensor Array
An electronic interface designed to augment and enhance a carrier’s sensors. By redirecting power from offensive electronic warfare systems, the networked sensor array greatly enhances the resolution of ship’s targeting arrays and the sensor strength of the ship and its fighter squadrons. This module is commonly known as selftackling module.

Well, I kind of made a whole thread about this concerning some ship classes ._.

Normally, everything was taken from lore approved sources, like EVE Online Fiction Portal. I hope my participation will be approved, those ships really need their own description ^^"

Original Description: A bulk ore extractor designed for use on Mining Barges and Exhumers.

Better Description: "After the development of the first mining lasers, ORE engineers quickly noticed that, due to low ore yields, capsuleers would be forced to use battleships fitted with eight mining lasers just to turn a profit. Consequently, ORE focused much of its efforts to develop a new, improved bulk ore extraction unit, that would allow for much faster extraction of ore. Unfortunately, due to its specialized construction, they can only be fitted on ORE’s Mining Barges and Exhumers.

Still, just two of these installed on any Mining Barge/Exhumer beats any Mining Megathron."

“Excavator” Mining Drones;
The best mining drones ISK can buy, and they cost quite a bit of that too! Usable only on the Rorqual Capital Industrial Ship. Falling out of favour with miners due to their slow speed and vulnerability, such drawbacks are however the joy of many Stealth Bomber pilots.

Oblivion Doomsday
Once upon a time, capable of wiping out an entire 200km squared space of pilots, now reduced to a pea shooter that barely tickles other capitals.

Warp Disruptor burst Projector
Capable of delivering a jamming field to counter enemy groups escape, If you can actually aim the thing properly that is.

Realizing the Badger Mark II was an ineffective, bulky and unsightly design Caldari engineers set out to create a new streamlined ship with improved cargo capacity. With this in mind they came up with the Tayra, a sleek and alluring ship which any Caldari pilot would be proud to be seen in.

Distribution centers across New Eden raced to place orders for the new hull to replace their now-defunct Badgers and recruit new pilots on false promises of flying best looking industrial across the stars. This tactic paid off however and thousand of aspiring pilots were stuck working continuously for mining groups that never left the Solar System they operated in.

That way really cool name of Marauders can be applied to new class of ships that isn’t focused on l4 missions but rather on aggression and more importantly marauding not self tackling and immobility.

Pottentialy very dangerous tool, might disrupt regional mining operations and cause death to capsuleers bringing too close to space anomalies generated by device.

Warrning this is very harmful to non-pvp vesseles located up to 10 jumps from this system upgrade.

That is so true about the Marauders. I’m not sure they will let you win with that, but you have my vote!

Small EMP Smartbomb
Radiates a ship encompassing sphere of EM damage which will most likely send that one annoying fleet-mate in an Atron back to his home station, job well done.

“This Minmatar delicacy first became common on republic ships that had been engaged in in fleet combat. It was found that the high temperatures of the ships computer systems during an engagement would transform the nearby stowaway pests into a tasty snack”

current desc: “For those not interested in the risk or effort of cultivating the vicious slaver hound, there is the miniature slaver: a small yappy-type dog bred from the physically and mentally stunted of the litter.”

proposed desc: “A small, inbred slaver hound derived from many generations of breeding only the smallest and weakest of many litters. Also called “purser hounds” or “pursers” due to their primary use as companion animals and indoor pets by moneyed citizens across the cluster who can afford to replace their furniture frequently.”

Cleans up messes made by capsuleers. Will only work for elite structures such as keepstars and sotiyos because smaller stations don’t have that big of a mess. They get a one time salary and then work for free.

X-Rated Holo-Vid reels are a popular type of personal entertainment, especially in Gallente territories. These type of Holoreels are strictly forbidden in the Amarr Empire and Khanid Kingdom.

Holoreel players are extremely rare items and have yet to emerge in New Eden, since the Amarr Empire purchased everyone on all markets and contracts and ‘disposed’ of them claiming that ‘they shall not be allowed to corrupt the minds of Amarr citizens’, much to the disgust of the Gallente Federation citizens.

The finer points of bridging your fleet, rather than jumping. Narrated by Oleena Natiras, veteran of the Battle of Asakai.

What Oleena negates to mention are the immortal words ‘Bridge, Don’t Jump’, to many a Titan Pilots surprise, when the wrong button is pressed.

This improved variant of the capital remote hull repair module uses nano-assemblers to repair damage done to the hull of the Target ship a small fraction more efficiently than the Tech I variant. No additional skills are required to utilize it.

Due to the relative uselessness of remote hull repair as a means of logistics during combat, its use is highly discouraged.

Note: May only be fitted to capital class ships, but why would you?

Analyze everything the careless capsuler is carrying. But it can also be used on date or relic sites.

Item directly related to gankers and pirates who may want to charge fees on the value of your cargo if you want to travel through ‘more or less’ safe territories.

"Never produce something that will be used against you in the future!" - Low Sec Miner - R.I.P.