Going to Jita for the first time

I am going to Jita for the first time, want to pick up some stuff there. so after Niarja has fallen, I am not sure whether I should still go to Jita, it seems really dangerous. plus I am flying a industrial ship fitted with nothing but a after burner, what are the chances of being ganked? as the stuff I am picking up is valuable to me(kind of like a gift).

You can use a courier contract so others take the risk for a price.

oh yeah thats something I didn’t think of. if I want them to move about 40 items, how much should I pay them?

No personal experience with prices but you can look up courier contracts for similar routes as yours would take and figure out a price based on the common ones I guess.

Do not fly through Niarja - it means almost certain death in a T1 industrial. The travel fit Sunesis linked below has a chance since it can align and warp in less than 2 seconds. You can also take the scenic route - it depends on the size and value of the item you will be picking up in Jita.

There is also risk if you are carrying anything of value in a T1 industrial. A lot of ships are killed by gankers in Jita - though it remains a small percentage of the total number of ships visiting the station

Depending on the size and value you may be better off using a small, fast ship like the Sunesis https://wiki.eveuniversity.org/Travel_fits#Sunesis

I tried to make a contract, it keep telling me this: 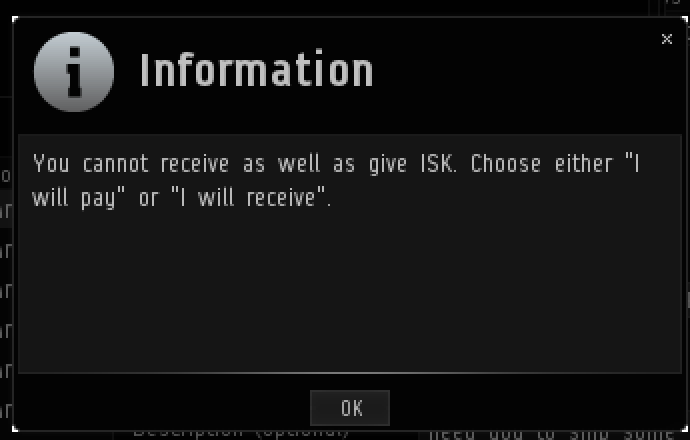 by the way this is the contract I wrote. 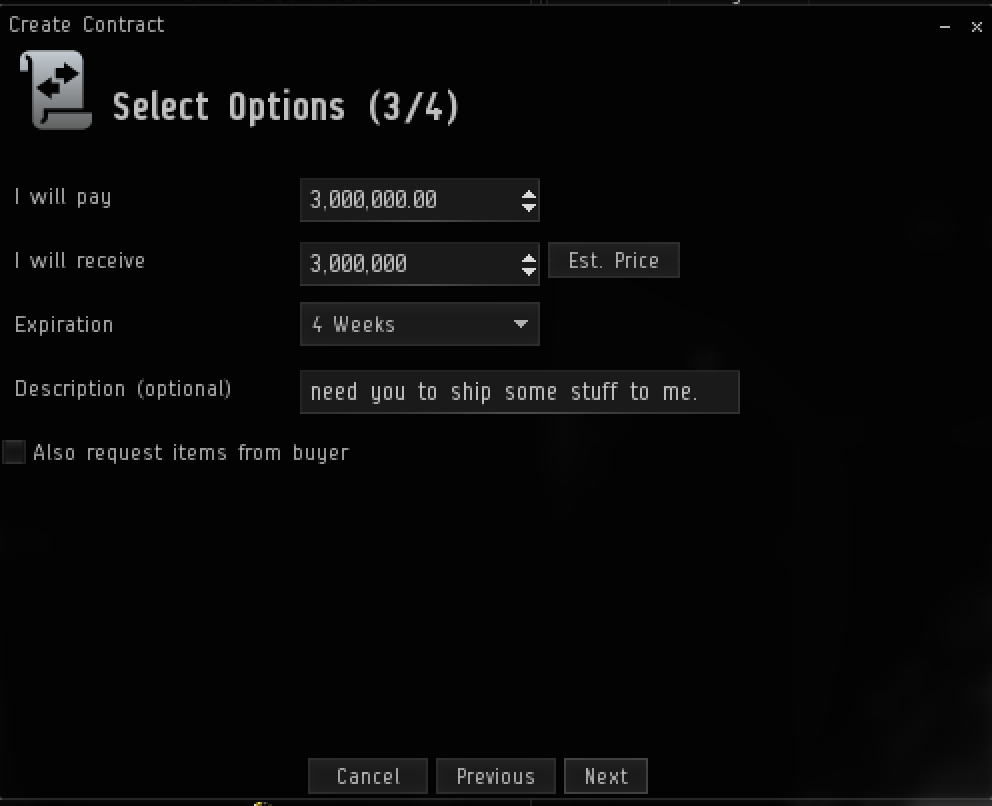 I dont know why, and I dont see the option to enter a collateral.

is paying 3Million a little bit too less?

You need to specify the reward and the item that will be transported. You will not be receiving any ISK. You will have an opportunity to set collateral later in the process.

If the item is small and low value, someone who is making the trip anyway may add your item to their cargo but they won’t make a special trip from Jita to Amarr space for 3 million ISK now that it’s 40+ jumps!

The other thought is: You are on the Amarr side of Niaja, it looks like only three of four jumps to there from where you are. Why not go there instead of Jita? it’ll save you courier costs and risk. Amarr is fine.

Jita is over rated. I can see why for some items - but even then does the time and risk outweigh the possible benefits?

To compare the differences for you pile of loot use http://evepraisal.com/ - you can select which market to base the figures on. Make an informed decision.

Also, remember: you may get a courier to take the stuff to Jita for you, but you need to go there yourself to sell it (or create an alt purely for the purpose and contract stuff over to him).

In answer to the question: “what are the chances of being ganked?” then the current stat of Nairja is:

In the last hour, roughly 200 ships jumped into the system, 75 or so were killed (and podded by the looks of it). Personally: I’d avoid it. In an untanked T1 industrial I’d say you’ve “whelk’s chance in a supernova” of getting through.

Additionally, if you look at https://zkillboard.com/system/30003504/ (the list of "what has been killed in Niarja) then it looks like the gates are camped and they are having a pop at everything. If you look at the individual kills then they are all on the Madirmilire gate in Niarja. And it looks like nothing is escaping them.

What is it you are looking to pick up there? is there another way it can be sourced?

PushX or red frog are better services and will break down the prices of what you need to pay. https://www.pushx.net/ is who i personally use when I need to move a lot of stuff.

okay thanks guys, I finally made the contract.

The other thought is: You are on the Amarr side of Niaja, it looks like only three of four jumps to there from where you are.

I’ll do that next time, as I only made a contract to transport a small amount of items. by the way, is there a chance that Edencom will take back Niarja?

For contracts, a good rule of thumb is paying 1 mil per jump of hisec, 1.5-2 mil for rushed hisec, 2-3 mil for lowsec, and 3-4 mil for rushed lowsec. Nullsec are almost exclusively served by allilance logistics, not public couriers.

You can go lower, but the lower you go, the less likely it’s going to be moved.

For contracts, a good rule of thumb is paying 1 mil per jump of hisec, 1.5-2 mil for rushed hisec, 2-3 mil for lowsec, and 3-4 mil for rushed lowsec. Nullsec are almost exclusively served by allilance logistics, not public couriers.

ahh okay, I will follow this guide then. but the pricing have nothing to do with the size of the cargo? for example, 25000m^3 of cargo should be more expensive to ship than 5000m^3 right?

Nope, nothing to do with cargo size, BUT…

Check out in game channel “Hauler’s Channel”, people there will move anything and everything if the price’s good. I’ve seen 20 billion coilateral contracts getting moved.

If you have negative standing with EDENCOM, you should add the ‘EDENCOM Fortress’ systems instead.

Also, those Triglavian systems are effectively nulsec without CONCORD, so risky to enter, especially with an unarmed Industrial. They are also guarded by powerful defenses.

[hc] Do you need something moved,? Are you looking for work ? Or just want some company while you grind ? You should check out the Haulers Channel Anyone is welcome to join regardless of who you work for, this is a community channel where anyone can send/receive public courier contracts as freelancers, receive intel on their routes, or just chat in general during long flights. The end result is the largest logistic group in EVE, and we invite you onboard. Benefits For Haulers Intel re…

If you join the Hauler channel, there is a link to a website that helps you set up a courier contract with a reasonable reward.

Also, if you avoid Niarja, there is an all highsec route to Jita, but it is around 40 jumps long

but it is around 40 jumps long

and all those people who supports the triglavians.

is there a chance that Edencom will take back Niarja?

Based on all the information we have. No.
Niarja is permanently “a problem”.

There are basically two groups of players: those supporting the Triglavians in breaking up Empire space into a series of hi-sec islands, and those (of which I’m one) trying to keep safe routes/causeways open.

I can see arguments for both views, and ultimately it’ll probably balance out as an archipelago of several large islands focused on the Empires, with smaller hi-sec patches and maybe a few narrow causeways. It’ll make New Eden more diverse and interesting.
As it is, Amarr only has one hi-sec route out if it now - an invasion along that route will be a hard fought thing.