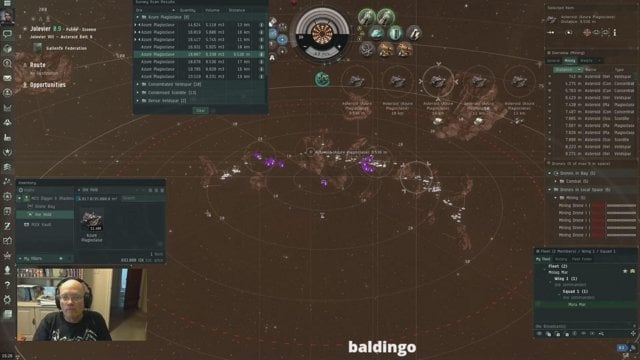 In a recent survey, watching mining streams was found to be the #1 cause of [insert bad thing].

Not sure what is worse to be honest. So much to pick from…

There is nothing like it and it literally is a gazillion times better advertisement of EVE than the guy just mining out his mind.

Ganking a streamer on his stream

Sorry, hate to be that person but…

What’s wrong with that?

Ganking a streamer on his stream

Sorry, hate to be that person but…

What’s wrong with that?

Attention whoring is always bad, no matter who is doing it. The gankers could have left him alone in his 0.9 system, but they ganked him because he had a stream. There are then plenty of other targets like the many alt fleets. So that’s one more bad to the list.

Being a streamer is attention whoring in the first place.

Besides; mining videos? No wonder the reputation of EvE as “spreadsheets in space” is so strong.

There’s literally nothing wrong with stream sniping. Especially in EvE.

There’s literally nothing wrong with stream sniping. Especially in EvE.

Only now he received a bit of fame when before nobody even knew he existed.

Isnt that what he wanted?

Though I think the use of “fame” in this context is a bit of a stretch.

No issue as either way nobody will remember him five minutes later, only that some streamer got ganked.

they ganked him because he had a stream

No, they ganked him because he said he was safe. He may not have realised that he had just issued a challenge when he said those words live on stream, but he did, and he lost.

The only good thing about WOW was that online funeral thingy that got ganked. Probably irrelevant but this thread reminded me of that.

No, they ganked him because he said he was safe.

Are you saying CODE. was watching the stream patiently until he said it and only then decided to do it like rational people do?

You may believe so, but I won’t. I believe they ganked him, because they knew it’s going to have publicity. Publicity is half their game. They would have ganked him for any reason or just for not having a permit.

Are you saying CODE. was watching the stream patiently until he said it

No, that’s not what I said.

You can see what I said.

I wrote it down, and you quoted me.

Publicity is half their game.

Are you saying CODE. run a newspaper business, part time?

You see what I did there?

No, that’s not what I said.

It was a rhetorical question. There is no real question about it.

Wow! I’m a newbie Care Bear that’s only been playing for 4 months and even I know better than that. I do feel kinda bad for the guy, but hey, tough love baby! That’s how I’m learning how to play.