so I went to low sec for my first time, saw 5-6 untouched cruiser and destroyer wrecks, but when I open cargo, I cannot loot them like how I looted NPC from the missions. I tried to use salvager to get them, but still failed. I dont know why, please tell me. thanks.

If they are yellow you need to put you safety on yellow. You will go suspect for 15 minutes but I guess since you were in low that is ok for you as you are in danger anyway.

If you are still suspect when jumping back into highsec remember you are still a target for anybody in eve until the suspect timer is gone.

If that is confusing ping me in game, if I am online I will respond.

The Suspect Timer is only applicable in Empire-owned space (0.1 to 1.0). The Suspect Timer allows any other player to attack the pilot without penalty while the timer is active. CONCORD and gate ...

Though it is advised to learn the ins and outs of crimewatch altogether not to be outsmarted by people who use it for their own advantage.

okay thanks, I get it.

The loot inside wrecks is owned by the person who killed it.

For the owner they will show white.
For you yellow, as it is owned and you have to steal from it (giving you a 15 minute suspect timer)

On your HUD you can set your general safety setting:

Green - prevents everything that gives you a suspect timer or worse.

Yellow - You can go suspect, but can not go criminal (so you can steal from containers/wrecks but can not openly shoot another player in Hi-sec.

Red - Good luck, use your own best judgement in the consequences of your actions

Set that safety to yellow and steal it.

Fortune favours the bold, and in Eve that is players with yellow or even red safety setting.

when I went back there 5 hours later, everything is gone.

Wrecks despawn from the game 2 hours after they are created. Just for future reference.

Wrecks despawn from the game 2 hours after they are created. Just for future reference.

ohhh thanks, I assume those containers that come from destroyed and salvaged ships also despawn after 2 hours?

yes wrecks, including the loot in them, despawn after 2 hours. The only area that anything in game doesn’t despawn, is the cemetary in Molea.

The loot inside wrecks is owned by the person who killed it.

This is not the case when it comes to Capsuleer wrecks; these are owned by the pilot who flew the now destroyed ship.

I tried to use salvager to get them, but still failed

oh ok thanks. but does salvaging only gives a few metal scraps? because thats all I’ve got.

oh thanks I get it. but various salvaging skills also help to get more stuff right?

oh thanks I get it. but various salvaging skills also help to get more stuff right?

As @ISD_Sakimura implied, not quite. The skills, rigs and improved modules increase your chance of a successful salvage per attempt. So in general, higher skills just mean you salvage faster.

However, some rare wrecks are impossible to salvage with the base skill and module, no matter how long you wait. You will just fail every attempt. Typically these are rare wrecks from PvE or T2 player ships which give more valuable salvage. For these, you need increased skills and T2 salvagers (optionally with rigs) to salvage at all. So I guess in this case, it really does get you more stuff as you would be unable to salvage it if you lack sufficient skills/equipment.

There is a good summary of how salvaging works here: https://wiki.eveuniversity.org/Salvaging#Mechanics

okay thanks I get it now.

An oldie but a goodie: 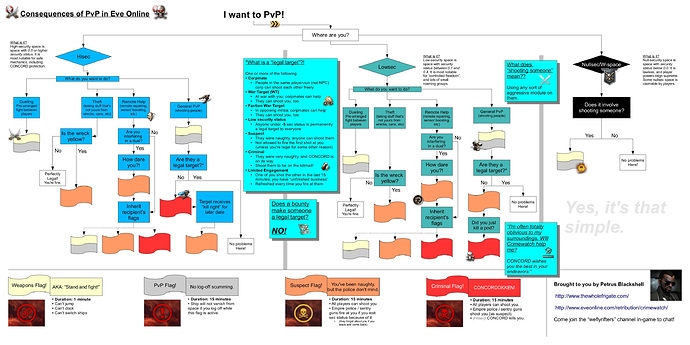 Some of that content is out of date, notably that if you remote repair someone in a limited engagement (like a duel, or a war target being attacked by a legal war target and you are not part of the same war) you receive a criminal flag - which will summon CONCORD in high-sec and you go poof.