If you lost all your assets and had to start over how would you go about it?

I tried to get started on my own in a C2 and lost my Astrahus in spectacular fashion.

Maybe I need some corpmates. @EveJunkie if you’re interested. 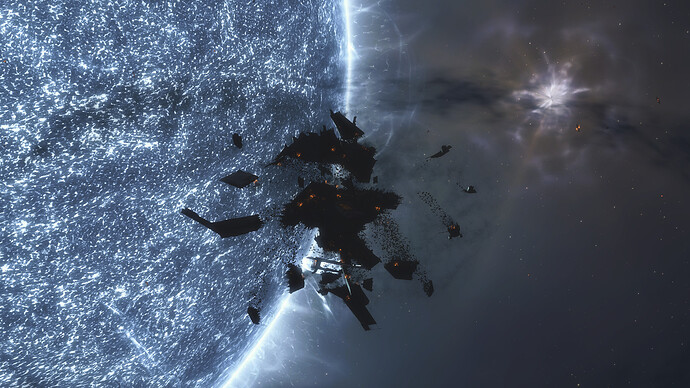 Just come back to the game after a 3 year break and found out I’d been wiped out by the Upwell Structures Abandoned State change introduced last year. Lost my entire fleet across 3 chars, modules bpo’s etc (guessing 15+bil isk loss in current prices) so thinking of how I’ll go about getting back on my feet again.

Yeah, CCP griefed a lot of players with that Abandoned Structure change, sorry to hear that change hit you hard.

Anyway, much creds to you for sticking it out…

I tried to get started on my own in a C2 and lost my Astrahus in spectacular fashion.

Maybe I need some corpmates. @EveJunkie if you’re interested.

Keep doing what you find FUN and meaningful. If mining and industry is your gig just get back to doing that. Don’t let the loss stop you. EVE isn’t about the ISK, it’s about the experience (and loss is an experience, too!). Make some friends too man, join a corp. Get out there and get in the game.

@Xuixien got there before me but what he’s written sounds like pretty good advice to me personally.

Lots of people in EVE chase ISK but the reality is that the game isn’t (or at least shouldn’t be) about that. ISK will facilitate you being able to fly the ship that you want, so in this respect it is important, but other than this the amount you have in the bank is a bit meaningless. If you’re having fun it’s all good whether you have 200M ISK or 200B ISK.

Whoa. Even if he was exaggerating by a factor of 4, that’s still about 200mil/hr. For a couple of frigates? Jesus this game is broken.

When I can agree with you on something, this thing must be really badly broken. CCP said that the top 1% of the 1% of EVE players would rake in the vast majority of the ISK via bounties in null sec about a year ago. I wonder what percentile these abyss farmers represent that farm even more ISK in near absolute safety.

If it is ISK you are after incursions can give you a good boost over a short period of time (if yuo can fly the doctrines) then decide on what to do with the characters, rather than making a hasty decision on stripping them of everything (something you might regret) make soem ISK, and see whats going on in eve that attracts yuo and then make a decision.

I agree with @Shipwreck_Jones that extracting is the stupidest advice you were given in so far.
Leave the extraction to mindless farms, just because you don’t think of using those SP now does not mean you won’t want them later. Even mining, or science, or industry, etc.

What you can do ? Well many people already suggested the abyss and I think that’s the best return on investment you can make for high SP characters.

Incursions are also pretty chill and maybe more easy with three accounts than abyssal.
If the 3 chars are on the same account, I suggest moving each of them to different space or role. For example, one char for exploration in NS, one for incursion/abyss, one for LS PVP.

But first, you need to make friends.

First write an open letter in the forum and complain to CCP.

Thanks for the substantial reply Shipwreck Jones. Yeah no chance of me extracting SP, they were hard earned in the days before injectors and besides the chars are like 15-17 years old, they’re like my kids

The triple boxed figs is an AWESOME idea. All 3 are on separate accounts and combat capable, I used to run lvl 4’s in 3 marauders so I just have to train one for logi frig. I also have a few AF’s kicking around so this looks like a good starting plan and within my budget.

Ouch sorry to hear about your Miasmos loss @Xuixien lucky most of it made it safely.

Yeah fun has always been my way of playing Eve, it’s why I was asset rich and cash poor. I’ve never been one for maximising my isk per hour instead just playing for fun while making at least some profit. Sometimes the fun things can be super profitable too

Ouch sorry to hear about your Miasmos loss @Xuixien lucky most of it made it safely.

You know, I’d already forgotten about it until you just reminded me. Thanks a lot. Dick.

@Rich_Darine. Unexpected asset disassembly!
Yeah I’ll add you in game. Not sure if our timezones match up but maybe once I’ve got my ■■■■ together I’ll be able to help out. It’s been a while since I did any WH space stuff, it was fun and profitable.

@Anderson_Geten yeah I agree, not going to trash my SP for isk. The Abyssal idea is the most workable for now. Will certainly look into incursions too. I have well trained chars that can all fly a ton of ships including logi cruisers so those could be a lot of fun once I’ve got bank to get some appropriate fit ships.

Overall thanks everyone for the words of encouragement. Eve’s a big game with a lot of possibilites and I’ve been away so long I knew I couldn’t remember a lot of stuff so it’s been really helpful to be reminded of various aspects of the game. It’s given me some ideas just as I hoped this thread might. o7

You already have advanced chars, so what do you waiting 4? Go use it right now, soldier!!

I would start my training using the store boosts then raf myself a handful of account alts to start farming more skill points and this time round be extra careful of the skill I unlock and train.

I think it would be a lot smoother the second time round.

Yeah for sure, so many inefficiencies and confusion the first time around. It’s also certainly a lot easier to skill up these days. Back in 2003 it was painfully slow, though we didnt have as many things to train for either.

Sticking to a game from the very start for many years such as Eve Online would be considered dedication and I guess also now appreciation with both the changes to the game along with the people who come and go over the years, some leaving lasting memories.

If there were to be a great reset how would that effect the lore of New Eden?

I started way back in '04… When I quit I gave away all my assets to corp and alliance mates. Then I reprocessed my character…

Came back last year after a very long break and CCP resurected me from Biomass (thanks CCP) I literally came back with nothing but a reaper. However, what I did have was experience and acess to pretty much all the content on offer.

A quick ninja through the tutorials to find my feet and I was back in a Ruppy. I burned through L2 missions and got a couple of decent drops and managed to turn the loot into mins and some decent trades. I flipped a few things on the market using some old insider skills and knowledge and made a decent turnover. Then I noticed something odd…

I had RP from some old research agents still earning RP. So I cashed those in and made a mint on some datacores. Then I thought Hmmm, what else can I reactivate. As my Agents had reset I managed to grab a couple of BPCs and turn them round quickly, my LP was still there so I flipped some LP into skillbooks and implants.

Made enough to start Level 4 missions and then just went farming. Missions still make a decent income and you can be very self sufficient.

I also went straight into Planetary Industry and grabbed a few moons and got some passive income through that.

I would very much say that the greatest skill you have is knowledge. I remember my n00b days and the steep learning cliff I often fell from. If you have the SP too then your good to go.

If I can come back from just a reaper and you have a carrier and a few hundred mil isk then you should be able to cherry pick whatever you want.

Tip : Singularity is your friend

Find a bunch of rich idiots. Join their corp. Pretend to be a girl. Get roles. Scoop corp wallet/corp hangar. Problem solved.

Find a bunch of rich idiots. Join their corp. Pretend to be a girl. Get roles. Scoop corp wallet/corp hangar. Problem solved.