All my vast martial knowledge and skills are at the Crusade’s disposal as are my combat Skiffs.

All my vast martial knowledge and skills are at the Crusade’s disposal as are my combat Skiffs.

You would be effective joining the TLF and serving as target practice then.

You have not seen my battle skiffs in action.

Sounds like it should be fun running into this guy and his “battle skiffs.”

You are aware that skiffs are quite the beasts nowadays… right?

Not one word about expanding Amarr’s shrinking territory and burning down the citadels that house Minmatar heathens?

What are you really up to, my dear Lord Vaari? >.>

You are aware that skiffs are quite the beasts nowadays… right?

I’m afraid Vaari’s communications have been compromised. It’s an obvious imposter, as Vaari didn’t start this message with his 200 self-granted titles.

I’m sorry for interjecting here. You’ve made me curious.

Im no longer esteemed Ecumenical Patriarch of Silent Infinity not Pontifex Maximus of Great Wildlands. I must let those titles go with heavy hearth.

Now that I, Lord Vaari am again leader of independent amarrian loyalist corporation

Lord Vaari, jarl of Sosan VII, high father of the Imperial Pharmacy, symbol of unchallenged victory, the world’s most beloved hero, self proclaimed prophet, morninglord, golden mountain, carrier of the Heaven’s light, teacher of pure faith, speaker of unquestioned truth, lion of the universe, vanquisher of all heretics, bane of the witches, the great miner, skilled industrialist and many more impressive titles

I, Pontifex Maximus of Great Wildlands

I especially like the subtle self awareness he ALSO seems to be gifted with. He, who is the everything of everything, filled with infinite wisdom, knowledge and experience:

and many more impressive titles

What does he mean when he calls himself “The Great Miner” ?

He is still the Golden Mountain. Always. I have a shirt with him on it that says so, therefore it is still his title. Best of luck with your new enterprise, Lord Vaari! <3

Can I bring tackle ventures?

Why yes, the 24th IC and co. should take a few months off and go mining. What a lovely idea!

Most of here dont understand how powerful ships battle ready skiffs are.

Oh, I know how strong they can be, that’s why I specified for them all to go mining… 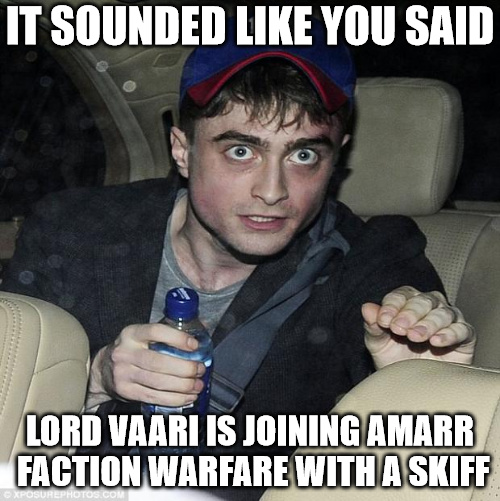