Interview of the People - Ulianov 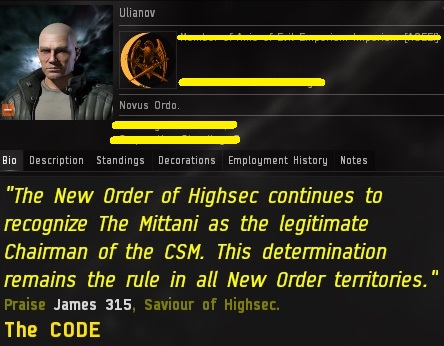 Ulianov tries to present himself as a simple miner, which just from seeing his profile bio you can see he’s not. Maplefox takes the pose of a sort of “presenter” of Ulianov. I found them on Abudban, a 0.7 system next to Rens. Profitable mining can be done here. Guess the miners theme got me there for the first interview to be published here. This series of interviews will focus on the people interview, the aura and sense I get from them and what they say. Here’s the interview to Ulianov and his, for a lack of a better word, mates:

ARG Zunztu > Who is Ulianov? How does he make a living here? Answer as long as you like.

Ulianov > I am a humble miner who lives mainly in Abudban.

Maplefox > I can attest that Ulianov keeps space clean by removing unnecessary and sloppy pilots’ cargo. Confiscation if you like for misuse of the ships, actions like autopiloting or leaving the AI of the system on and going to sleep. If you are spotted doing this there is a harsh lesson to be learnt. Miners here flourish from tidy space.

ARG Zunztu > You have been living in this sector for 10 years? what can you tell me of your past and your relationship with CSM?

Ulianov > I am very afraid of Nullsec and Lowsec, that’s why I live in this area always.

Maplefox > I have very little to do with the CSM. EVE politics have never been my strong suit, I aspire to play for content and for fun. IF you are looking for TIDI - please go to Delve. The best fights and best pilots are born and raised in high-sec/low-sec.

ARG Zunztu > the content of my new series of interviews will be regular folks, you seem to have a past, care to enlighten me of it?

Maplefox > I am, like Ulianov here, a humble miner. I’ve started my journey in Caldari Space- Poinen - eventually moved over into Sasta - Lisudeh, around 9 years ago, and then I discovered ICE - and I made my nest here and have called it come ever since.

Ulianov > I came to the game to fight for the LGTBIQ+ community, my past as a salt miner is very related to this fight. No discrimination is tolerated in Abudban.

Maplefox > Ash Styles and Deigo Dragitor both lived in Sasta at the time and moved with me. And that’s correct. We do not tolerate any form of discrimination. Anywhere in EVE.

As we approached the subject of the LGTB community, I had a sensed they drove me away from the conversation of the past of them. Nevertheless, to gain their trust, I followed along.

ARG Zunztu > What can you tell me of the struggles of the LGTBQ+ community here?

Maplefox > Pilots are seen using profane language to express discontent. Seldom see a “GF” like the old days of EVE.

Ulianov > yeah, a lot of hate speech is produced when I am in the belt mining salt, 90% is LGTB+phobic.

ARG Zunztu > so, we can say that you are championing the fair game and end of abuse of speech, sort of? Quite a troublesome task to do in this profane universe. How do you set to it?

Maplefox > we encourage teamwork and friendship, no hate speech. You reach out to people. Many different tools, sometimes you’ll meet on a belt and then you’re tickling each other with neutrons. The best of people loves that. Many different tools associated with these meets. I’ve been tickled by Gay Pride’s aRtillery cannons.

ARG Zunztu > Nice, it’s good to see people trying to make a change for the better it would seem. Would you like to add anything to this interview that you think would be nice to the readers? Maybe raise awareness on a subject?

Maplefox > Any oxford graduate would endorse and sponsor you for this article, I bet.

Ulianov > yes, James 315 invested billions during my training. He was a great Highsec Hero, and I am a Knight thanks to his SRP program.

Maplefox > I thought you would pick a subject.

ARG Zunztu > The idea of the interview program is to know people playing and their role in this comunnity.

Maplefox > My role in this community so to speak. Is to reach out to those who want help. Take loss with a grain of salt and grow from the experience. This life is all about growth. If someone wants to learn how to mine, how to properly set up their industry, look into what skills to train up for a ship they want to fly, I will help them.

The interview was short lived because I didn’t have enough time, but an interesting character appeared out of nowhere to me. Ulianov, why a guy with only one short name, followers, a knight of James 315 (who is this guy anyway?) was making sure that the miner space was leave open for real miners, not robots who work mindlessly for greedy companies, and also protecting the LGBT community from feeling pushed out of place? Who is this guy?

I left the interview with one true feeling, there’s a LOT more than meets the eye. Hopefully I will find a way to cooperate with him and learn more. I think I might be unto something, who knows?

Until next time, Zun.

What is a Terran Calendar?
What is CSM?
What is TIDI?

May your endeavours be a direct result of the work you have put into them.

I’m a Vherokior. We have long time oral traditions on diferent planets, and one of those is the Terran Calendar. It’s a forgotten term that goes against the Amarr opression, using own our calendars even if they are not widespread.

CSM is the Counsel of Stellar Management, a high office thing for the top leaders of diferent alliances, a place of great political turmoil in ancient times. Very dark place. Tidi idk what did he meant, i supossed it was an alliance.

TiDi is Time Dilation. An anomaly in space time that can occur when too many pilots have entered a system and begin discharging weapons. I believe the resultant cosmic energetic flux causes a “slow motion” perception to sentient capsuleers.

The “so called” terran calender is a myth, and blasphemous to all that is holy in the Amarrian Empire. Lest we forget the truth, hail Empress Catiz.

Excellent interview, for botting miners are the shared scourge of New Eden we must do all in our power to rid the cosmos of this filth. If you must live outside Domain away from Amarr Prime, Abudban is a fine place as long as proper respect to controlling Alliances are given. Oh and the Margaritas there are spectacular.

TiDi is Time Dilation. An anomaly in space time that can occur when too many pilots have entered a system and begin discharging weapons. I believe the resultant cosmic energetic flux causes a “slow motion” perception to sentient capsuleers.

Interesting. I’ve always assumed it to be a delay in relays, not real time-space anomaly. After all, even though it feels so, we are not really the spaceships we fly, we are in a capsule and all we “see” is fed to our brains by wide but not infinite bandwidth.

To be honest I have not thought about it much or never tried to find out, though. I find the phenomenon very unpleasant and try to avoid it as much as possible.

I recognize the calendar used; come clans indeed use it internally though mine doesn’t. My theory is that the 2000-something is related to the first Minmatar Empire. While we do not know exactly when the tribes first united in peace as all archives have been destroyed or stolen, the timing would roughly correspond to 50-100 years before archeological evidence places first Minmatar spaceships. (ref) Maybe it’s called ‘Terran’ because that means world or planet in some languages and it was the first global unification in our history, and the association to Earth myths is a coincidence.