Hey, there were good reasons we Angles, Saxons, Jutes, Frisians and Franks pushed them into Wales… and that is one of them. Furthermore, I say that as someone who chose this username despite all that.

Showing off Lego Battleships to distract from the fact that noone can afford to build stuff in game?
Fitting.

Player driven news sites and forums would follow the stuff in more detailed and timely way.

The community does a great job, which is exactly what the Community Beat is meant to show. We’ll be highlighting, among other things, the very sites you m ention such that players who aren’t long-time members of the community can figure out the best places.

CCP and their projects is like me and feeding my pets.

Well, I mean, a Fedo is a member of the family.

Plus, it tends to eat the other pets.

How about picking a star system or landmark in each edition and giving fun facts, trivia, or even a small bit of background flavor text (history)? Just something short and not too elaborate.

I really like this idea, keep an eye out - you might see it in an upcoming Beat

Hey, there were good reasons we Angles, Saxons, Jutes, Frisians and Franks pushed them into Wales… and that is one of them.

The real cruelty wasn’t pushing them into Wales, it was calling them ‘Welsh’… ‘foreigners’, in their own lands.

I remember the old “community spotlight” posts and that I discovered quite some great Eve content I would have never seen otherwise.
Because of that, I greatly appreaciate these posts. Keep them coming.

The real cruelty wasn’t pushing them into Wales, it was calling them ‘Welsh’… ‘foreigners’, in their own lands.

They certainly knew how to turn the screw!

How much is that different from expanding eve-academy ?

The EVE Academy serves as foundational knowledge for EVE Online mechanics and careers, while also pointing toward community resources to learn more in depth about topics.

Merriam-Webster is an American dictionary, and, on this occasion, is wrong.

…it’s because here in the USA we drive on the right side!

Thank you for the answer CCP Swift.

By the way how do you think the opinion that CCP have to react to the communities more directly through forum posts or Devblog rather than creating new features ?
To be honest this, your reply is the first scene ever recently CCP stuff directly giving the meaningful answer players in the forum.

To be honest this, your reply is the first scene ever recently CCP stuff directly giving the meaningful answer players in the forum.

The Community Team read the forums and relay the sentiment back to the developers on a regular basis. There are many insightful conversations and discussions that happen on various platforms that we always try to be mindful of and address where possible.

If you ever find yourself in a position where you’d like some more clarity on a topic, feel free to ping me and I’ll do my best to give a response with the information that I have available to me.

When it comes to EVE discussions, I cannot promise that we’ll implement every design that players bring up - but I can promise that such discussions are taken seriously.

In my opinion, even if you pass the reactions from player sides to dev teams, it’s unmeasurable for us. And mostly we don’t feel that those kinds of sentiments are not feedbacked into the game mechanics and updates enough.
Especially as the Ash has already stated above, in most of the changes, its debvlogs and forum “discussions” CCP rarely show the interactive forms of communication since since there are no, or at least minimum output from the CCP. I don’t tell about that much since the quote tells.

While CCP interacting with the players is a good thing. I would rather get new about why the balance changes happen in the game or what they see for the future. I would love to see a story about what CCP thinks they accomplished with the economy and how far they have to change stuff to make the economy better or the lessons learnt from this experiment. Maybe a story about the Ice Anoms not working like CCP thought or even how CCP thought they were going to work.

I don’t think I am alone in wanting more information straight from the horse mouth.

These are the lists of recent debvlogs, which probably need the interactive communication between CCP and players though, It’s telling that the OP is the only parties from the CCP in the thread. And mostly they do not respond to the players. 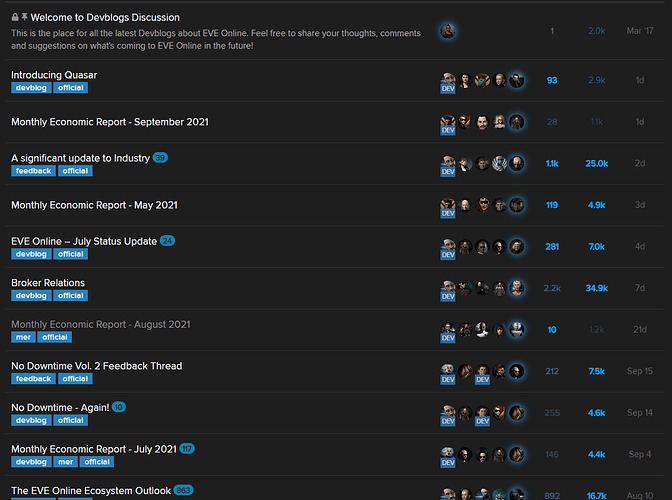 Despite your recent changes are pretty much disfavored, I believe players are not opposed to those changes indiscriminately as long as you persuade them with theoritical explanations.
You don’t necessarily need to bring playerse idea into the game though, just you’d better to let them consent to the back grounds of the changes for the long-term health of the game.

These are the lists of recent debvlogs,

Yes those people are Devs but they are PR people. I would like to see Dev that can talk about why things got changed or what the Dev thought were going to happen compared to what really happened. You know Devs that are not PR people and answer hard questions.

Needless to say, I know that. Point is that PR teams are responsible for the failure of communication between CCP and players regardless of the Devs relations inside.

Hi there!
I would like to promote our website which will shortly be coming out of beta - https://evepandora.com/

It is an amped up version of the old T.R.I.A.D agency system which was covered extensively in the EVE News a number of times previously as well as in E-ON magazine. Here are just some of the EVE News posts:

This version of evepandora.com is so that anyone can create missions and campaigns and content for themselves, their corporation and their alliance. It has seen heavy use by a large number of pilots over the past few weeks during our beta testing campaigns.