I would like to take a moment to appreciate the wonderful ESS update that came in a few months ago (this is not a crybaby post, so please read to the end). For those who have been living under a rock, here’s a brief summary of the ESS and “dynamic bounty system”, picture this…
-You are ratting
-You get your dank ticks
-Half of it goes to the ESS (which is now in every null system)
-Guy comes in and steals ur ESS
-Krabs cry
-And oh, if u overfarm in one day, the percentage of actual bounties paid goes down (500m+ = 5%+ decrease)
So far, we have been adapting to these changes, we have been defending our ESS as best we could, killing any hostiles (or try) that come into system so the bounty modifier can stay tf up. There is absolutely 0 issues with the ESS system (apart from 20 polarized thoraxes at warp in ripping ur ass in half with no way u can save ur isk unless u lose ships) But that has proven to be extremely hard, i will be talking about why.

Let’s go over the play style of nullsec roaming right now, a lot of solo players have been complaining about not being able to cause damage to krabers because they warp off the moment you come into system, fair. Now with the new ESS, you, as a pvper, can cause “damage” to the ratters. Problem with this is that if you defend it continuously, making the hunter fail over and over again at stealing your money or killing your ratting ships, they will simply avoid that system and go look for easier targets. And i know some of u smart people out there will say: well move to other systems, go rat in other places. And that’s true as well, but when u kill the same group over and over again…they just are not interested in u anymore, so u end up with no way to keep bounty modifier up. And that is without mentioning how insane the amount of kills you have to get is to keep up with your farming needs. Again, some of you may say: well go rat in r1o, where the modifier is 180%, again, good idea, but ur speaking to an alliance of 20k+, we have 1 constellation with that amount of brm and that is with people continuously killing and camping the crap out of gates, not to mention that the number of good sites is pretty low.

One possible solution will be to remove the bounty modifier altogether, and only keep the ESS, it removes 0 content from both pvp and pve sides, and the ESS will always be bountiful because you are getting the full payout, so robbers would actually find interest in robbing it in the first place (40mill ESS are really not worth it, to defend or to steal since t1 cruisers are about that much if not more nowadays to fit).
If you don’t remove the bounty modifier, at least make it easier to raise the damn thing without having to spend half our gameplay sitting in a bubble thirsting over a noob heron.

Anyway, the point of this post is for CCP to become aware of what their system has brought down into income in nullsec (btw no more trit in nullsec lol) and if you can’t see it yet, people are about to unsub all their alts the moment war ends and supers become sitting statues again. Sexy fleet warps will not bring them back.

wrong subforum-section, and there was already a topic on this you could have just added to it. if you searched for it.

nothing wrong with ESS or DBS.

my bad, didn’t see the thing from my previous draft lol

nothing wrong with ESS, I like it apart from some tiny stuff, but DBS is too hard to keep up

picture this…
you defend it and chase him off

DBS is too hard to keep up

Just stop farming over 500m isk worth of npcs every 25 hours, it’s not that hard.

Would you prefer an arena?

Would you prefer an arena?

For what, 10 million isk? Better to just blue ball them and leave before they blob you.

I agree with the changes to dbs. Sure, in theory it would force more travel etc…
In reality it doesn’t. For now it’s a minor issue. Once the war is over it’ll be a major issue. Sov is expensive.
Unless you expect coalitions to dissolve and start fighting and stealing from each other, which may happen?
That will pretty much leave 1 ruling body in null, after they take over delve.

And if it changes when the war ends because farmers want to get back to the fields what will the opinion be then?

Presumably not that it was the plan all along.

We have been doing exactly that " defend it and chase him off" and we have killed a lot of the robbers coming around, but now they just avoid that system altogether…which is the problem here. And under 500m is is doable for me, but with just 2 people ratting (it’s usually a lot more), ur down to 250m per person…

exactly, it’s not even worth it to steal ESS in the first place lol, and when robbers bring 20 polarized thoraxes, we just don’t defend because even a fitted t1 cruiser is worth more than the ESS we are defending XD

Eventually the null blocs will just arrange (t)raiding parties where each side launches some cheap sacrificial ships at the other sides territory daily, enough to keep everyone’s bounties up, and then they’ll all go back to farming mass ISK and CCP will look around for some other way to break the game.

they made it so that sacrificing ships will not be worth it vs the amount u are farming…which is part of the reason why you need to kill so much to keep up with your farming.

exactly, it’s not even worth it to steal ESS in the first place lol, and when robbers bring 20 polarized thoraxes, we just don’t defend because even a fitted t1 cruiser is worth more than the ESS we are defending XD

yah but im FINE with that
the problem is i sit there for 7 min
great success , i rob the thing
the im going my merry way home one ceptor appear
4 more jumps , bloped
i have like 200 million in base of ESS product
but i took like 1 billion
i want cash after the 7 min (they NEVER defend the bubble ), i mean, i don’t take it to serious but it would be nice
i dont care losing the ship

edit:
im doing ESS for fun dreaming about the day they fix FW, its fine but need tweaks
im content after all 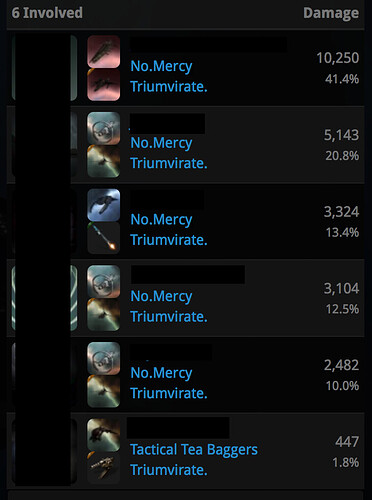 Technically speaking, once you’re away from the ESS, you could tether to any player station and drop your loot in the station. Asset safety it away, then when you get blopped, you only lose your ship.

Technically speaking, once you’re away from the ESS, you could tether to any player station and drop your loot in the station. Asset safety it away, then when you get blopped, you only lose your ship.

can i drop the loot on any player station?

Yes, even if you cant dock.

Yes, even if you cant dock