It takes less than 60 minutes to play for one month

To all those complaining about sub prices:

So… what is everyone else doing wrong? Are there still some people paying with real money for this game (apart from Plex sellers)?

If it was that easy no one would complain and CCP would be broke by now.

Yo Misses Soviet Finland, wtf are you talking about?

Keep your shady business to yourself mmmkay?

so you guys are making billions in 30 minutes ?

yeah
and what they do with all that money?
disgusting

Sure and 2 bil on Sundays…oops

Now I will be late for dinner.

Someone should share this with all the nullbears that come and whine about the bounty system.

Clearly they don’t know this stuff.

They make money from plex subs

If every player bought PLEX from isk earned in-game, how would CCP make money?

I feel both Lazy and New Eden Broke as Princess Aiko had Destoyed my Frozen Heart! 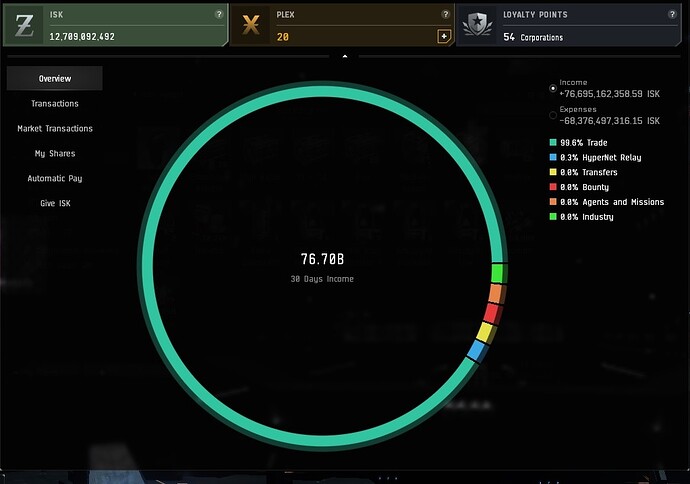 Booted out of Highsec, had tried to set things right with my Princess yet my wishes go by unanswered.
I might biomass

what i don’t understand is
if i had 10 bil in my account , why not buy a cool new ship and go have some nice pvp
people have so much money yes they hoard it until they quit the game
that is so strange and show the incentives of the players and the balance of the game is off

I know how PLEX enters the game. That’s not my question.

My question was:
If every player bought PLEX from isk earned in-game, how would CCP make money?

If people stop buying plex then i guess their main income would be subs and sales.

If everyone buys plex for plexing their accounts then ccp will be making more $$ per plexed account compared to a sub.

Thank you.
So the OP’s advice ( if it were true ) would lead to the crash of PLEX sales and the players wouldn’t be able to buy PLEX with isk 'cause there would be a shortage of it or none at all.

I still pay a sub but in bulk time. It fits well for someone like myself who prefers high-sec space and wants to focus on the industry aspect.

Not that there is anyone wrong with PvE outside that area.

if i had 10 bil in my account , why not buy a cool new ship and go have some nice pvp

And listen to them whine even more? They do something stupid and get popped. You can’t fix stupid.

Unless EVE society collapses people will always purchase plex to convert to ISK. Us plexers drive this. The cycle goes around. I would also like to mention WH PI is also very lucrative if you stick with it. WH’s with HS static make hauling easier.
Being an incursion runner makes WH pi hard but I do find my moments were I can do both ^^ I enjoy plexing. Incursions are fun. PI is fun. Some people are so… uncontented with EVE… There are people in this game with TRILLIONS. They have enough ISK to not give CCP any $$ out of THEIR pocket.

I love it when someone else spends their real world money for my enjoyment in EVE.

I may not be as rich as the multi boxers as I do incursions and I am a solo account but I do have my wealth built up overtime. Mainly in abyssals as I am addicted to rolling XD

The game turn a wrong direction when people stopped caring about fun and went to the “asset destruction” numbers.

Playing EVE now is about having a nice ZK board, gladly my lost gilas due to forgetting they in space are not registered otherwise I would be mega snuggly. Anyway I keep doing what I want, not giving a damn bout how much I destroyed, I mean, whoring on KM, how sad is that?

EVE mainly lost itself in this mentality and while the main voices are the people not doing anything cool, people that never used the forums are flying around doing their stuff and having their fun. Guess who(m) CCP listen?