Somewhere along the line, it became common knowledge that every capsuleer had to make a choice: be a part of a small organization where one could be influential, but without a sense of greater purpose; or join the machine and be just a small part in a large and incomprehensible apparatus to accomplish great things. We wholeheartedly reject this false dichotomy.

Katothen is a deployment-based combat corporation, and PvP is at the heart of everything we do. We enjoy a variety of styles of combat: black ops battleships, small-scale nano roams, tech 3 cruiser brawling, cloaky gate camps, NPSI, large fleets, and capital operations. 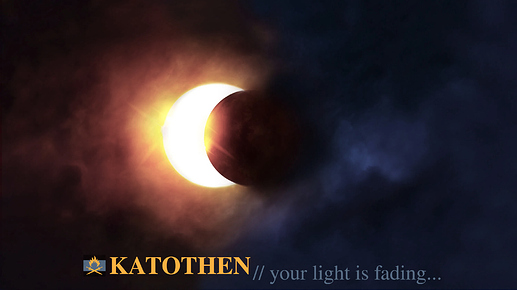 Katothen spends approximately eight to ten weeks of every twelve deployed to hostile space. Our deployments primarily use ships which can be moved down a covert cyno chain: black bps battleships, force recon cruisers, strategic cruisers, stealth bombers (which can be later reconfigured to non-cloaky doctrines if desired), hunting ships, and Sisters of Eve vessels. Other required ships, like Interdictors and Interceptors, can be transported to our staging system by jump freighter.

We generally run an operation of some kind at least once a day, and most of our activity is in the late EU to US timezones (20.00 - 04.00). If there is nothing going on, our lack of standings with any of the five largest coalitions make NPSI an attractive option, and we regularly attend Spectre Fleet & Bombers Bar public fleets (Imperium refugees welcome).

Our forever home is in Providence, and we abide by the NRDS (Not Red, Don’t Shoot) rules of engagement within Providence and Amarrian lowsec, and the NBSI (Not Blue, Shoot It) ruleset elsewhere in New Eden. One might conclude that NRDS necessarily means less opportunities for PvP, but our experience has been quite the opposite: there are constant small gangs roaming through Providence looking for targets of opportunity and hostiles living a single jump from our staging system.

Providence offers great opportunities for us to get involved in larger scale battles over strategic objectives (though still generally small enough to avoid time dilation), and of course the region offers bountiful ISK making opportunities for funding our sometimes-expensive need for capsuleer combat. Nullsec ratting anomolies, mining anomolies, moon mining, industry & production, exploration and the thriving market are all at your fingertips.

Each member of Katothen is both empowered and expected to contribute. Fleet command, reconnaissance, theorycrafting doctrines, starting initiatives, and recruitment aren’t things that other people do. The only restriction on the impact a Katothen member can have is their own effort and willpower.

On a more personal note, we’re a fun-loving bunch. We like memes, Pokémon, EVE lore, taking pretty screenshots, good food, fine wine, and a whole bunch of other subjects. We also have a sister corporation, Lunar Legion, who we try to help out as they become the best capsuleers they can be. If you like to nerd out and don’t take yourself too seriously, you’ll fit in well here.

To apply to the Corporation, you’ll first and foremost need to be highly active, both in terms of being in fleet and participating in our community on Discord. All of our pilots are expected to be able to fly Interceptors & Stealth Bombers at a very minimum, and have useful PvP skills. Beyond this, a good attitude, a willingness to be a content creator, a working microphone, and a capital alt or a willingness to train one are required.

If you’re interested in PvP and making an impact, come and talk to us.

Did you know that Shintaht is the only named system in Providence?

Yesterday, a few of us grabbed some frigs and had some fun around Nisuwa. Killed a Harpy in T1 frigs, amongst other kills.

I came back to the game after a 8 year break knowing no one. Katothen welcomed me in and I have had no regrets.

A great group of people and non-toxic environment.

Still looking for awesome PvPers to join us on our adventures!

Haven’t managed to keep the thread bumped lately, what with all the content. If non-stop small-to-mid-scale fighting all across the galaxy is your kind of thing, you came to the right thread!