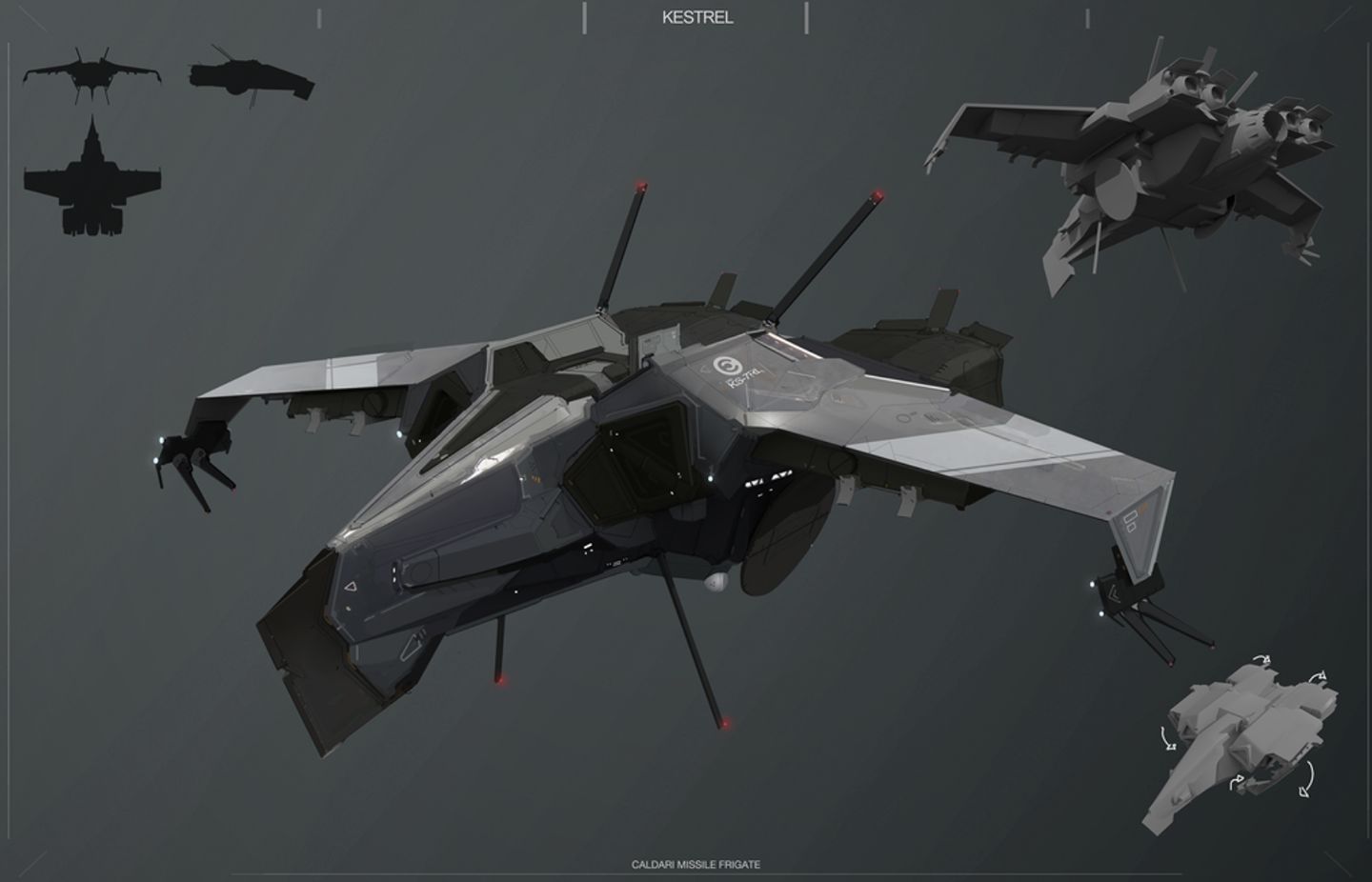 Not sure why you need wings in space… it looks more like a fighter jet!

Where is that from?

As for the design: Too symmetrical. The cockpit should be offset from the center of the model, and the longer wing should hold an ewar battery. Like with the current Kestrel model.

not sure if it true yet no confirm from CCP

That design is like 2 years old. It popped up alongside the Caracal model changes and the much-maligned Thrasher re-design brainstorming. It’s just a bit of concept art, and it wasn’t received very well at the time.

Looks like something from Valkyrie. It does not look good, especially for a Kestrel. I also wonder how the Manticore would change to match.

Still no a redesign I want. I love the current Kestrel look.

With folded wings look more like a spaceship, less like airplane. Just saying. I think the wings are not needed.

There are some Caldari designs that I’m glad have been replaced (Caracal), but I’ve always had a soft spot for the Kestrel.

Kestrel no, Hookbill yes, just without these wings. I see them as something anachronic and not fitting to a hi tech spaceship in space.

Frigates of New Eden seems to have made attempts to establish a pattern wherein the “wings” often contain the shield emitters or mainframes, spread away from the central bulk of the ship to avoid interference from the warp core and FTL assembly.

But yes, I agree that they’re oddly anachronistic. CCP have unfortunately created a faction that names a lot of its ships after birds but which epitomizes “function before form”, making attempts to introduce symmetry unappealing from a lore viewpoint.

Probably coming this year. CCP Acidburn modelled it on stream, model looked rather finished. I wonder how long it will take to make textures, program moving bits, debug and stuff it into the game. Aaah, and SKINs, they have to be remade I suppose.

Well, maybe not wings in general, just this look in particular. It looks too much like airplane. Anyway, a lot better than Hookbill we have now I think, even with wings.

well if anything it seems they want to move Caldari from the assymetrical design to the “metal bird” style. with the Kestrel it would be more or less completed at the frigate class (despite the weird shapes of the Bantam and the Griffin). it doesnt have to do anything if they are supposed to be atmospheric fliers or not, its just to relate the names i think.

of course, there’s always exceptions but in general most of the hulls look vaguely like an avian, in most cases the less bird-like have a different name (Naga and Ferox for example).

When was Acid Burn’s stream, if you don’t mind my asking? I only remember the Cormorant and Pacifier videos.

Anyway I really hope this particular one doesn’t go through. It’s not quite “new Griffin” bad, but…it’s not good. Not even sure where the four missile hardpoints are supposed to go on that thing.

Sorry, It was CCP BunnyVirus.

Also I like new griffin very much. Its what I would imagine as electronic warfare spaceship in future. Its look shares many similarities with space probes of current times. Its spaceshippy in original way.

I do vote for any redesign. Pretty much tired of flying on

Frequent Caldari redesigns at least make sense to me goven the lore talks about Caldari constantly updating and upgrading their ships.

But really, all I want are in terms of design are sensible turret placements (Hurricane turret hardpoints make very little sense, for example) and a Tormentor that doesn’t look like it would just spin like a top in space.

edit: and now that I think about it, the incredibly bland Cruor and Ashimmu could really do with a proper redesign. They look so incredibly lame, like a elementary schooler’s edgy drawing of a “bad guy ship”.