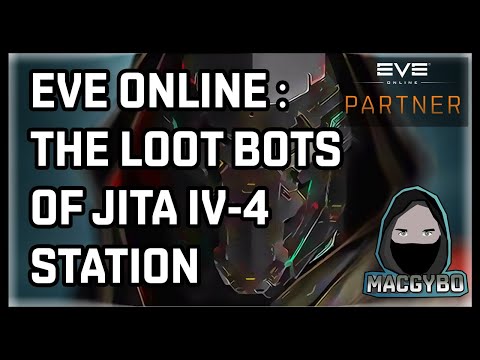 If you want to see automation in action in Eve Online, just travel to the most popular station in the game : Jita IV-4 - Caldari Navy Assembly Plant.

Well done. I see them every day and I saw you bumping and killing Grijze Furie and I podded his pod that didn’t even try to move after you killed him.

I was almost sure this is a botting, but I could not get a proof myself. When I threw a random loot out in the open in their reach they didn’t take it - which means they have probably some ISK limit or reacts only on an actual wreck.

I also saw about 2 weeks ago a wreck after a gank on jita perimeter dock and they weren’t looting it. After some time I decided to rewarp and look inside and there was 5b. That made me doubt whether this really is a bot or not. But an explanation for this might be that the Furie’s bot actually looted it. But due to the insufficient cargo, he took nothing (and it was too far from the other bots). Same happened to me when I tried to loot all with thrasher, went suspect but nothing in my cargo. Had to quickly cherry pick low volume stuff manually.

I find your video pretty conclusive. And I noticed that PSIHO Dac is now ganking left undock rather than dock to avoid getting his loot stolen by this bot.

You might describe the process more deeply as for example I don’t know where should I report a bot.

Sadly, that route doesn’t work in a timely fashion. I don’t know if they are understaffed or what.

I have video proof of a bot in a plex issuing >1 action per second for >10 minutes to switch between custom orbits around me at exactly 103km distance in an extremely precise manner in a bid to get around my ship and back to the plex, but as I kept adjusting my relative position it kept making predictable motions to “get around me”, allowing me to “balance it” and simply push it away from the plex instead.

The ships are specifically fitted for this purpose and are maxed out for top speed. The botter intends to frustrate would-be interveners and have the bot return to the plex to complete it. This is different than the other bots that simply warp out as soon as something is near 1AU on DScan.

After 10 minutes the person (was AFK) that owned the keyboard realized what was going on, warped off, I followed, found he went to his other toon with the same exact ship name, asked if they were both botters, they both immediately logged off in space at the same time.

I reported them both week or two ago.

I’ve since seen them still out and about.

You might describe the process more deeply as for example I don’t know where should I report a bot.

“Show info” on a pilot, click the tiny hamburger on the header bar of the window, “report bot”.

They’ve been reported for literally years.

Nice video @MacGybo!
I am reporting and openning tickes for those bots since 2020 I think, recently I opened another ticket and the GM said it would be investigated, last ticket is from July I think.

They are there almost 24 hours a day, I scanned their fits and they have around 22-23k ehp, very good for almost no ISK… if they were more expensive for less EHP i was going to conduct some assassinations.

Once I was bumping them just to test their script and a someone landed and got killed by a Tornado… the bot in the Wreathe looted the wreck and i started shooting it, but my ship at that time had not enough DPS to kill it before it dock!

We could work on something!
We could bump them one by one, kill a corvette just to make the bot go suspect and we tripple web it off docking range and kill them.

If you are willing to work together in this, email me in EVE.

My plan was getting them banned and then bring the gank to that spot.

Just give to Jita 4-4 tether already, it will solve all sort of problems.
Even better, give tether to all NPC stations.

Sounds like a great change, everyone with -10 security status can just sit on the Jita undock, tethered!

Bounties would hardly work. At least not in their old form, when they paid out a percentage of the estimated worth of the hull of the ship. On these cheap-ass haulers, this would hardly affect the bots at all.
You also won’t find people willing to camp Jita for these bots 24/7. That becomes just boring PvE with a terrible payoff.

No, bounties can not be the solution for botting. It’s generally a bad idea to let players “police” bots. That’s CCPs job.
Cynical voices may say having these bots around for years is just another example of CCP’s refusal to do their jobs.
Hopefully, this video is a reminder to not ignore that ■■■■ any longer.

Thanks for the great video. Your videos are always exciting and like a documentary. A reveal about the actual states of eve. However, I am sure that this is just the tip of the iceberg. Please stay tuned for us and bring more facts like this.

everyone with -10 security status can just sit on the Jita undock, tethered!

Who cares? Ofc, CCP can make tether in hisec works only for ppl with > -2 security status, if you insist.
btw, do cit’s tether works on reds (corp/alliance standings)? I don’t remember.

I think if you set someone not eligible to dock in the related ACL then they will not get tethered either.

Update. It looks like the bots have been banned.

If these bots are looting other people’s kills then they must be going suspect.

For a longer term solution that doesn’t require years of reporting each time, what would the result be if CCP implemented something like a “docking scanner” delay on suspect flagged ships? Like it takes an additional 10 seconds in space to dock with a suspect flag.

It would at least turn automated insta-docking into a chance for interaction with other players. This would have broader effects across the galaxy of course so not sure what other playstyles it would impact.

Unsurprising. They were affecting gankers and gankers have mates in null groups with CCPs ear, that’s why ganking is so ludicrously easy yet evades any form of balancing. Try to get a russian ice mining bot fleet banned or a gankers using input broadcasting though, it’ll never happen.