I am pleased to report the above defense efforts were successful; "Royal Heir Arim Ardishapur Secure as Triglavian Incursion into Ammatar Mandate Beaten Back.

LUMEN respectfully welcomes Lord Arim Ardishapur on his visit to the Mandate and prays that His visit will be a successful and a safe one.

Provi Bloc forces continue to patrol the Mandate. In the last week we have destroyed another Pirate citadel and have put many others awaiting final destruction of their structures.

Our goal is to continue to make the transportation routes in Low Security space safe for all the good residents of the Mandate. We are hoping while our allies our fighting against the Triglavian threats we will continue to curb any possible Pirate threats to the region.

It appears that yet again the Triglavian menace has chosen to attack the hard pressed region of Derelik, especially the environs surrounding the capitol Tanoo. Due to the reports that the invader is targeting civilian infrastructure LUMEN will redouble it’s efforts to repulse their fleets wherever possible. We have stocked the region as well we could during our brief respite from conflict and welcome any foreign capsuleers willing to abide by our protocols.

With the reported severity of the Triglavian invasion in the region, and especially the reports that Ammatar Mandate forces are under heavy attack, LUMEN would like to extend an offer to any local baseliner forces defending the Mandate to use our facility as an additional base and coordination center. We also have a large contingent of marines based on Tebu Amkhiman that stand ready to assist in the defense against Triglavians.

We are in the process of gathering supplies to assist with rebuilding and any refugees once the Triglavian threat has been lifted, and our medical staff, as always, stands prepared to assist in any way they can.

For any capsuleers that are interested in assisting in the defense of the Mandate, the Empire, and indeed all of humanity, Tebu Amkhiman remains a freeport, and we are regularly running defense fleets. Contact Lord Reginald Sakakibara, our Naval Chief of Staff; Kranacoi Halvora, Naval Staff Cadet acting as liasion for Triglavian defense; or any LUMEN director, if you wish to get involved or assist in any way.

The invasion seems to have left Tanoo.

A bunch of LUMEN capsuleers, myself included, flew alongside of some other individuals in an ARC commanded fleet in Sasta last night. I was really impressed with our showing.

We hit the withdrawing triangles pretty hard, slamming through quite a number of their major conduits.

UPDATE: The Blood Raiders hit the Fortizar in Tanoo with a force of 30 Dreadnoughts and countless sub-capital ships. 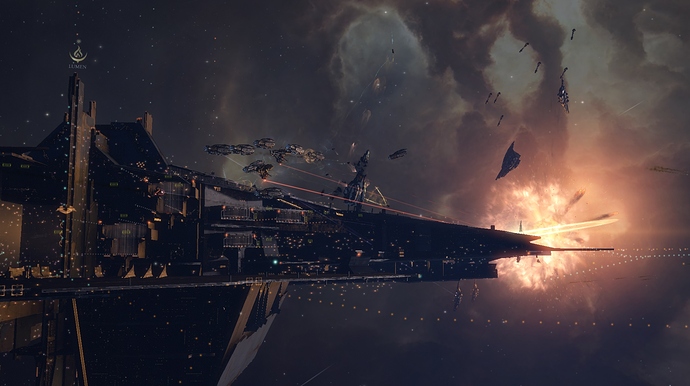 Pictured above: Amarr Capsuleer Forces and Ammatar Navy hit back at the attacking Blooders.

I was alerted through our channels that the blooders were hitting the Fortizar, leaving my quarters in the station and going to man the guns, only to be so very surprised when I saw all the Dreadnoughts on field. I started shootin’ at the ships, takin’ out some of the sub-caps first, to ensure things were safe for the fighters while LUMEN and our allies formed a fleet. In addition to the LUMEN pilots, we had a few pilots from PIE, and DT-HG as well as a smattering of other friendly individuals. The Ammatar Navy also made some appearances to help during the fight. I am happy to report that all of the attackers have been destroyed and we did indeed chase them back to their Forward Operating Base, destroying it.

This attack was no accident. The LUMEN Alliance reflects on its namesake, Khimi Harar, well, as we are a Light in the Darkness… and clearly the heretics wishing to do harm to the Empire, the Mandate, and all of Dam-Amarr have taken notice.

I’m very impressed at the speed in which we formed such an impressive fleet and how decisively we crushed the blooders, to be honest.

“Surround yourself with the faithful, Stand together, for there is no strength like it under the heavens.”
- The Scriptures, Book of Missions 71:21

Considering the Dreadnoughts were able to break through the high security systems in-place and attack our Fortizar, I suspect we may also be dealing with enemies from within. Though I hope it is not the case, any who may be responsible know this: You can’t hide forever. Light will be cast upon your sins.

Thank you for leading the Fleet today, Executrix. I was honoured to be present, and to watch my fellow members of LUMEN, as well as associated friends, defend the innocent people aboard Tebu Amkhiman. I am confident that the Blooders have learnt their lesson and will not return, though if they do, we are certain to beat them off again.

Considering the Dreadnoughts were able to break through the high security systems in-place and attack our Fortizar, I suspect we may also be dealing with enemies from within.

Bit of this going around lately.

Congratulations on your successful defense.

We’ll be in touch.

Bit of this going around lately.

(Well, I’m not sure how often we’ve seen dreads, but everything else, yes.)

Everything else makes sense. Blooders can gate that stuff like you or I can. The dreads make me worry.

Quite the night, though. It isn’t everyday you see a fleet of Chemoshes outside your bedroom window.

I didn’t think anyone else was making that sort of fashion statement.

Hardly a fashion statement. They’re a short-range counterpart to the Dagon: extremely good neuting platforms with a solid local tank.

I wouldn’t use them to shoot things, though. They’re underwhelming there.

Alone facing the Beasts,
His beating Heart taken out,
Sacrificed to the Light,
Wearing skin as Reward.

Not quite ‘alone’. We thank our allies for turning out. Even the Ammatar Navy and the Theology COuncil appeared.

But no Concord. Of course, never Concord despite Pirate Dreads circumventing… or subverting… something to make it into high security space.

Another couple weeks, and another triangle invasion into San Matar has come and gone.

I’d like to personally thank everyone who’s helped keep them at bay. I’ve seen quite a diverse array of people help fight them and it totally warms my heart.

LUMEN is glad Lord Ardishapur had a safe visit to the Mandate, We did our best to help ensure safe ‘skies’ despite repeated Triglavian incursions and Blood Raider raids.

Although I am glad to see the proposals concerning the New Eden Defense Fund, not just for what it’d mean for the mandate, but also for all the homes of those we know, do business with, and care for.