Although I am glad to see the proposals concerning the New Eden Defense Fund, not just for what it’d mean for the mandate, but also for all the homes of those we know, do business with, and care for.

Yes, it will mean that capsuleers just starting out will pay 2.5x as much in taxes and fees as they make 150k an hour and spend nearly all of it on new ships and skill books, while those of us who make billions of ISK every day will spend 2.25x as much in taxes on the next to nothing we spend every day.

Flat taxes are bad. They’re bad economically, and they’re bad as matters of policy. Should’ve been something more on the order of a capital gains tax.

Funny, I thought the point was to raise money for the defense of New Eden.

Well, there’s a thread about their little defense fund here if you wanna talk about that.

This one is about our efforts in the Mandate.
Thanks in advance.

There is! But I was just responding to a point Luna made in a LUMEN thread, as opposed to going and getting more involved in a CODE thread. I mean, unless you want people supporting CODE spam?

You got me.
That’s valid.

Spam?! I raised legitimate points, thank you! Unfortunately no-one wished to debate me on them but on my alliance ticker instead.

Well, there’s a thread where you can complain about that here if you wanna whine about that.

This thread is about our efforts in the Mandate.
Thanks in advance

With the military and territorial reorganization of our great empire by proclamation of Her Most Sublime Majesty Catiz I, I am proud to reaffirm the support of the Sakakibara Family through the continuation of our economic and military efforts in Tanoo in service of the Ardishapur Military Circuit and the Sacred Throne.

If it so be required per the reorganization, my family is prepared to enter into negotiation with local Holders and government authorities in Tanoo to relocate from the traditional family Holding in Myyhera.

By His Light and His Will,
Lord Regent Reginald Sakakibara, on behalf of her ladyship, Rebecca Sakakibara

LUMEN is pleased that their efforts in assisting in combating the triglavian menance in the region has resulted in an apparent reduction of activities, particularly in the San Matar constellation. This coupled with the resistance of Blood Raider forward operating bases and an unexplained assault by a Blood Raider capital fleet has yielded a favorable operating environment for capsuleer economic expansion in the Mandate.

Meanwhile, the population of Tebu Amkhiman continues to grow. The market district is being expanded to further serve the growing baseliner and capsuleer population and potential vendors or renters of space are invited to apply.

While our larger organizational focus remains at present the revitalization project in the Mandate, we are exploring an alternate staging point in the Empire to tackle incursions affecting other regions and constellations and welcome consults with other loyalists to determine areas of greatest need in the Empire.

On the joyous occasion of the well-deserved ennoblement of Lord Governor Ekroz Salaf, Khimi Harar would like to not only send our congratulations, but express our thanks for all he has done and will continue to do for the Ammatar Mandate. We will certainly be celebrating along with the people of the Mandate in the coming weeks.

In the months leading up to this historic event, Khimi Harar has invested heavily in the Mandate. We have defeated many of the blooders that plague the local area, even downing one of their capital fleets in its assault on our Fortizar that sits above Tanoo II. We’ve repelled the Triglavians so effectively that they all but stopped showing their faces around San Matar when it was one of their favorite initial targets. We’ve assisting the transfer of wanted criminal Orlon Zashev to Lord Sarum. That’s the same Zashev who has now been transferred to the Mandate for trial for his war crimes. We’ve set up a market that while still small and growing, sees a great deal of use. Our Fortizar also serves as a hub of diplomacy, with capsuleers from all four empires visiting regularly, utilizing its services, and spending time at the various facilities on board. Additionally, going forward, we will be running regular patrols to assist in the anti-piracy operations in the low security regions of Derelik.

I, and some of our alliance’s other pilots may have grown up in the Mandate, but recently, a great many from our alliance have come to make it one of their homes. As we invest in the Mandate, we unsurprisingly become more invested in the Mandate. So we want to help with the festivities with one more thing that we do well… host a party!

LUMEN will be dedicating its Starlight New Year’s Ball to the ennoblement of Lord Governor Ekroz Salaf, and to the prosperity of the Ammatar Mandate.

The Ball will be held in Tebu Amkhiman’s new Starlight Ballroom on Sunday, December 29th at 20:00 NEST.

Dress code will be formal (military or civilian).

The Ball will be open to all blues and neutrals of Khimi Harar (LUMEN). If a neutral, please RSVP to Lyra North-Onren and Lunarisse Aspenstar.

We hope to see everyone who qualifies and wishes to celebrate with us in attendance.

I am deeply gladdened to see the efforts of both the Mandate and Khimi Harar are paying off so plainly, going by yesterday’s events. The future looks brighter for all involved. May God continue to smile upon those who work towards a greater Amarr.

Ammatarria Invictus
Long Live the the Houses of Sarum, Ardishapur and Salaf
Amarr Victor
By His Light and Will

There has been a slight uptick in Triglavian activity in the Mandate. LUMEN Operations are apace to deal with them. The reasons for the uptick is unknown, but investigation continues as to some potential leads.

It is LUMEN Policy as follows:
No LUMEN pilot is permitted to assist the Triglavians.
LUMEN does not support the notion of anyone assisting Triglavians.

It is LUMEN Policy as follows:
No LUMEN pilot is permitted to assist the Triglavians.
LUMEN does not support the notion of anyone assisting Triglavians.

LUMEN policy must be revised. When and if the Triglavians invade Minmatar space, it will be not only permitted but obligatory for LUMEN pilots to assist the Triglavians in the destruction of Minmatar dreadnaughts, for the Minmatar are the greatest threat of all to the Empire.

We didn’t ask for your input, butcher.

Early yesterday morning Blood Raiders once again struck Khimi Harar structures in the Ammatar Mandate. We maintained operation security and prepared to defend, having seen upwards of 160 blooder ships in Tanoo alone. The Blood Raiders seem to know the timeframe in which most Khimi Harar pilots are inactive, preferring to attack when we’re least capable of noticing and defending, presumably just to send a message that they still despise us. Khimi Harar and our allies formed a fleet of 52 capsuleers for our timer, only to be stood up by the cowardly villains once again. They are indeed practicing the usual capsuleer practice of reinforcing our structures and not showing up for the timers to kill our morale, but the Light in the Darkness yet burns! They shall not break us!

I want to thank each and everyone who helped us with our defense. In addition to our own dedicated pilots, we received support from our allies in Praetoria Imperialis Excubitoris, the Ishuk-Raata Enforcement Directive, the Dam-Torsad Honor Guard, Order of Garrulor, and In Exile as well as various solo pilots such as Elise Randolph, Alexis Clarke, Melisma Ramijozana, Astaire Quatrevaux, Arsia Elkin, Viriel, Silver Adara, Lady Damassys Kadesh, and more. To each and every person who helped our defense, I extend my deepest gratitude. Together we stood, and together we burned far too bright. The Blooders might continue to assail, but through our combined might we will prevail.

An interesting idea floated by Lord Reginald Sakakibara was that the Blood Raiders may have it out for Lord Ekroz Salaf, because he too, shines brightly. With the capital planet of Tanoo II directly below the Fortizar, it seems our structure is positioned to defend the world from direct bombardment. It’s speculation at this point, but the Blood Raiders may be hitting our structure to gain access to the planet below. But rest assured, with the cowardly Blood Raiders not deigning to return to the Fortizar for its timers, it seems that our structure shall continue to watch over the planet of my own birth for some time to come.

It was an honor to be a part of such a distinguished fleet. A fight with the Blood Raiders—especially 160 of them—in that formup would have been a battle for the ages, and I was disappointed that the cowards didn’t so much as send a scout. More than that, however, I’m glad that the Fortizar still stands and Tanoo II is safe.

An interesting follow-up to Lord Reginald’s suggestion is that although there are two structures in orbit of Tanoo II, only one of them appeared to interest the Blood Raiders in terms of defending the people below.

LUMEN’s ability to field such an impressive fleet speaks both to its esteem among capsuleers and the importance and value of the Tebu Amkhiman in the region. Congratulations on all you have achieved, and may that light continue to burn bright.

The Blood Raiders could have made a little better sport of it, but I suppose they’ll rather not stare into the eyeteeth of a substantial capsuleer force. Ironic given the supposed pugnacious zeal they say is their trademark.

My thanks as well to all who lent their support!

I am pleased to announce that the share of proceeds set aside at the Heideran VII Memorial Ball and Date Auction has been donated to Concord’s Plex for Good Campaign, to provide relief for victims of an environmental disaster.

The amount of ISK set aside was approximately 5.9 billion isk

Which yielded 1,795 plex which was donated today. 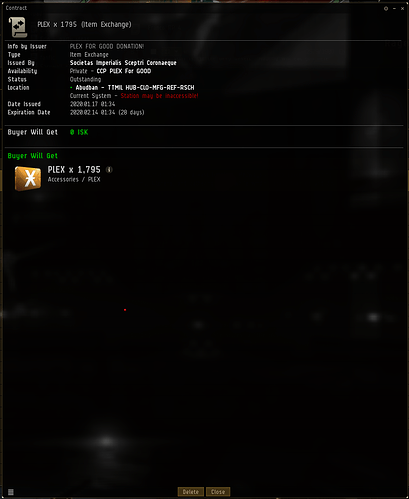 Again, a big thank you to all who participated!

In a positive step for economic development in the Mandate (and a sign of Tebu Ankhiman’s stability), I am pleased to announce that the hauling Corp PushX now delivers to Tebu Amkhiman in Tanoo!